Philadelphia Mayor Jim Kenney publicly apologized on Monday after he was busted for sneaking across the border to enjoy a meal at a Maryland restaurant over the weekend.

Restaurants and bars in Maryland are allowed to offer limited indoor dining—capacity is capped at 25 percent of what would normally be allowed in an attempt to reduce the spread of COVID-19. Establishments elsewhere in Pennsylvania are operating under similar restrictions as well. But in Philadelphia, indoor dining is still fully forbidden under restrictions imposed by the city government—the one that Kenney runs. The city's ban on indoor dining, which was extended in late July amid fears of a "second wave" of COVID-19 cases in Philadelphia, is scheduled to be lifted on September 8.

But Kenney apparently couldn't wait that long. A sharp-eyed restaurant-goer caught Kenney dining indoors in Maryland on Sunday. The photo quickly went viral, and Kenney's office confirmed to a local TV station that the mayor had gone south of the border to visit "a restaurant owned by a friend." 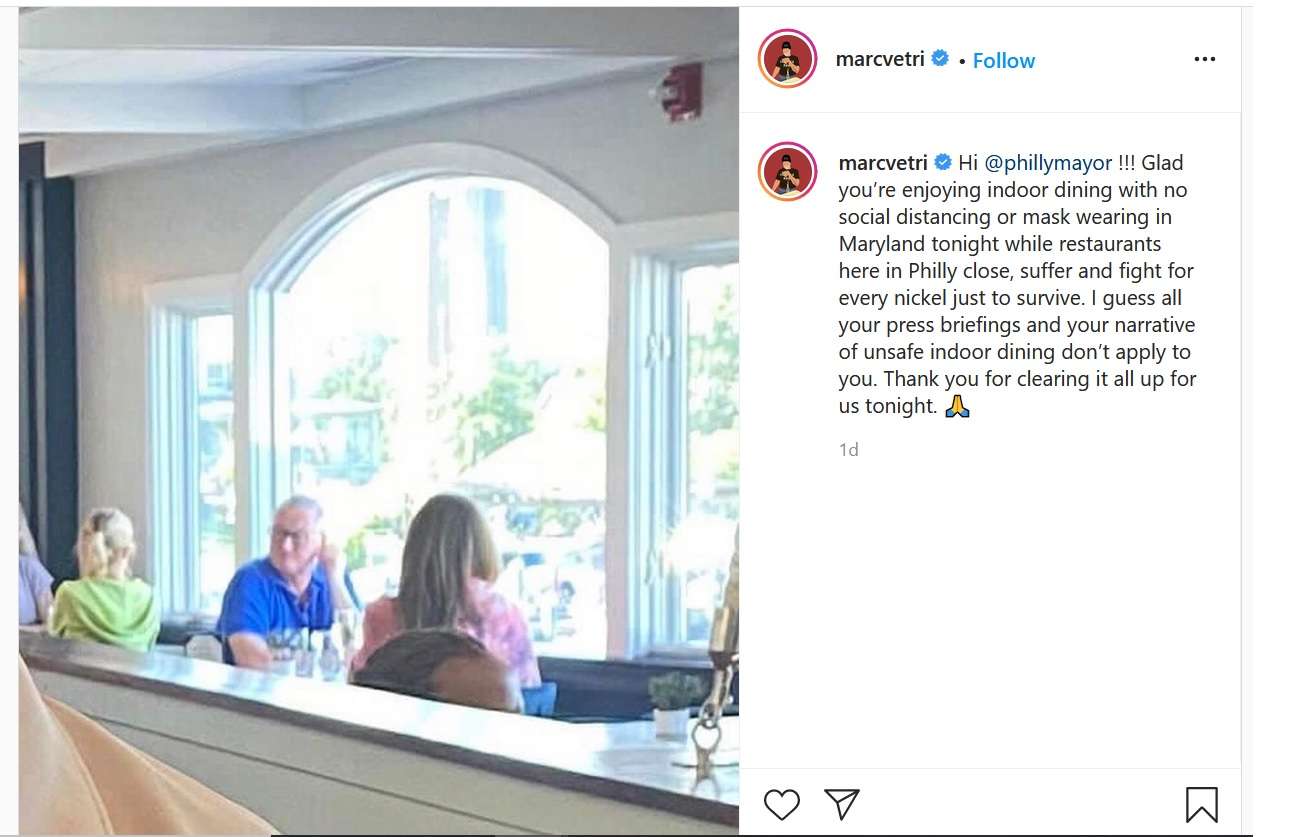 On Monday, Kenney issued a more substantial apology via his Twitter account. "I felt the risk was low because the county I visited has had fewer than 800 COVID-19 cases, compared to over 33,000 cases in Philadelphia," he wrote. "Restaurant owners are among the hardest hit by the pandemic. I'm sorry if my decision hurt those who've worked to keep their businesses going under difficult circumstances."

Kenney is right to point out that the coronavirus risk is not the same everywhere at all times, and it certainly makes sense for different jurisdictions to adopt policies that reflect that. But his do-as-I-say-not-as-I-do approach to COVID-19 undermines the legitimacy of the harsh restrictions Philadelphia has imposed on its own restaurant industry and demonstrates a callous disregard for how those policies have impacted the city's residents and businesses. Kenney can drive across the border to Maryland easily, but a Philly bar can't pick up and move to Delaware to escape the city's lockdowns.

If nothing else, Philadelphia's ban on indoor dining certainly fails what I'd call the Burgermeister Meisterburger Yo-Yo Test—a reference, of course, to a memorable scene in the most libertarian Christmas movie ever made. The test is a simple one: If a public official can't avoid breaking his or her own laws—even, as in Kenney's case, the spirit of the law—then they're probably bad laws.

Unfortunately, the COVID-19 pandemic has created fertile ground for arbitrary and meaningless restrictions on economic activity. Worse, it's not clear that lockdowns have helped curb the spread of the virus. As Reason's Jacob Sullum noted last week, both Arizona and Georgia have seen COVID-19 cases decline by roughly the same degree in recent weeks despite adopting far different strategies in July—Arizona Gov. Doug Ducey ordered gyms, bars, movie theaters, and water parks to close and imposed strict limitations on restaurants, while Georgia mostly allowed people to decide for themselves whether it was safe to go out.

The pandemic has also created an opportunity for public officials to meddle in even sillier ways, like when New York Gov. Andrew Cuomo, a Democrat, told bars they couldn't serve alcohol without also selling food—and then tried to regulate what types of food actually counted as, well, food. He's also threatened to ban not only indoor dining but also outdoor dining in New York state, which would likely condemn thousands of restaurants to failure. There is no clear public health benefit to any of that.

Bars and restaurants were always going to have a hard time surviving the pandemic as more people voluntarily socially distanced and cut back on their spending in the wake of an economic downturn; public officials should avoid making the crisis worse with arbitrary rules. And if you can't resist playing with a yo-yo, maybe don't make it illegal for your constituents to do the same.