If you're wondering how New York Gov. Andrew Cuomo sees his state's response to COVID-19, check out the pandemic poster he recently unveiled. In it, the coronavirus is a rocky summit that New Yorkers scaled with "the power of we," bolstered by additional assistance from health care workers, essential workers, out-of-state volunteers, and his daughters, Cara, Mariah, and Michaela. (The family dog, Captain, stands by for moral support.) Washed ashore is a cruise ship besieged by an octopus, which we can assume is also, in some sense, the coronavirus. "WINDS OF FEAR" blow around while President Donald Trump sits lazily on a half moon crescent. Underneath, a man dangles precariously from "Boyfriend Cliff," perhaps an homage to quarantine relationships gone astray, maybe a more pointed jab at daughter Mariah's boyfriend, Tellef Lundevall. (Sorry, Tellef!) But it's not all doom and gloom: Atop the mountain is a rainbow, studded with a "Love Wins" banner, presumably a shout-out to the gays.

"Forget the politics," the poster reads, in a quote attributed to Cuomo. "Get smart!" 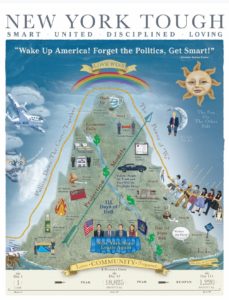 The Democratic governor has been the subject of several fawning media interviews over the course of the last few months, many of them conducted by his own brother, CNN's Chris Cuomo, with whom he's enjoyed a string of scrutiny-free conversations. This past Monday he appeared on Jimmy Fallon's first night back at NBC's 30 Rock Studios for a lighthearted back-and-forth; Fallon praised how "honest" and "smart" Cuomo is. "We're just worried the infections are going to come from the other states now, back to New York, and that would be a tragedy," Cuomo said, lauding New Yorkers for "taming the beast."

Passing the buck to other states is a savvy political move. But it obscures Cuomo's own response to COVID-19. As of today, New York has seen more than 32,000 of its residents die from the disease. That's more than seven times the deaths in Florida, about nine times the deaths in Texas, and more than four times the deaths in California. It dwarfs the totals in many European countries, and it nips at Italy's heels. Of the state's total, more than 22,000 deaths came from New York City. Compare that to America's other densely populated metropolitan areas: Los Angeles has recorded under 4,000 deaths, Boston has just over 1,000, Miami is at 1,202, D.C. has 571, Houston comes in at 491, and San Francisco has logged 50.

Cuomo certainly isn't to blame for all of the state's troubles. Plenty of politicians performed poorly, from President Donald Trump down to New York Mayor Bill de Blasio, and some factors were outside any official's control. But the governor did plenty wrong.

Let's start with his most egregious misstep. In late March, when COVID-19 measures were still in their nascent stages, not much was known about the virus. One thing that was known, though, was that the elderly were significantly more at risk to die should they contract it. Yet Cuomo issued a mandate requiring nursing homes to accept residents who had tested positive for COVID-19, including those who were still at risk for spreading the disease to others. Since then, around 6,500 people in those facilities—about 6.5 percent of the state's nursing home population—have died of COVID-19. That's more than any other state's total death toll, save for California, New Jersey, Pennsylvania, Illinois, and Massachusetts.* Cuomo has declined to share which nursing homes were affected. The directive was not reversed until May 10.

Earlier in March, the governor adopted a blasé attitude about the virus. "This isn't our first rodeo," he said at a March 2 press conference, after the state's first known case was announced. "We should relax." The governor assured everyone that he was implementing a robust contact tracing program that would track down everyone on the patient's flight from Iran. That never happened.

Once the outbreaks became more widespread, hospitals across the country began depending on their state governments for oxygen supplies. (Remember that, at the start of these lockdowns, the initial goal was to stem the spread such that hospitals and the emergency stockpiles weren't overwhelmed.) An over-reliance on Cuomo proved to be a fatal mistake. According to an investigation by The Wall Street Journal, many ventilators sent from the state and city, as well as some from the federal government, were old and faulty, and many patients died on them.

A spokeswoman for NYC Health + Hospitals told the Journal that many such machines "were not 'ready to go' when they came" and often required additional maintenance. Several health care workers claim that patients assigned those ventilators often worsened with collapsed lungs or similar complications as the machines were not able to provide proper support.

What's more, Cuomo's near-exclusive focus on ventilators neglected to address other hospital needs, such as the demand for supplemental oxygen and oxygen monitors. (Note that the market would have been able to step in here: A spokeswoman for Airgas said in an interview with the Journal that, though the company saw increased demand, it was never unable to fulfill a request for oxygen.) The lack of vital-signs equipment proved detrimental as well. Health care workers detailed stories of patients pulling off their oxygen masks while alone. Without monitors, they died.

Meanwhile, Cuomo got drawn into a public power struggle with de Blasio. The mayor announced a city-wide shelter-in-place on March 17; Cuomo squashed that on March 18; then Cuomo issued his own stay-at-home order on March 20. Something similar happened when de Blasio announced that the city's schools would remain shuttered through the academic year: Cuomo declared that only he had that authority and described de Blasio's order as the mayor's "opinion." (New York City almost always makes its own decisions about school closures.)

Whatever you think about either of these policies, the uncertainty engendered by the Cuomo–de Blasio feud did no one any good. A "truly effective leader," Anthony Fisher wrote at Insider, "would work this all out behind the scenes and not in front of an exceptionally anxious public in need of clear guidance on how they're allowed to live their lives during a crisis with no end in sight." And that back-and-forth may have had consequences beyond prompting confusion. The Journal reports that patients in New York City were often transferred between hospitals without the relevant medical and treatment information, even when those patients were not in stable condition. The city blames the state and the state blames the city.

But mixed messaging defined Cuomo's initial response to COVID-19, which teetered between cavalier and dismissive. Though he's said he wishes he "blew the bugle" sooner, he has spent considerably more time blaming the press, the experts, and the president.

New York's crisis moment has passed for now, with the curve flattened and daily deaths bottoming out. De Blasio celebrated a milestone on Tuesday, announcing that, for the first time in months, New York City went a full 24 hours without registering a single death from COVID-19. That's good news. But if the government's response hadn't been so incompetent, that landmark may have come a lot earlier.

"Tell the People the Truth and They Will Do the Right Thing," the pandemic poster reads, captioned above a cartoon image of Cuomo. If only he took that advice.