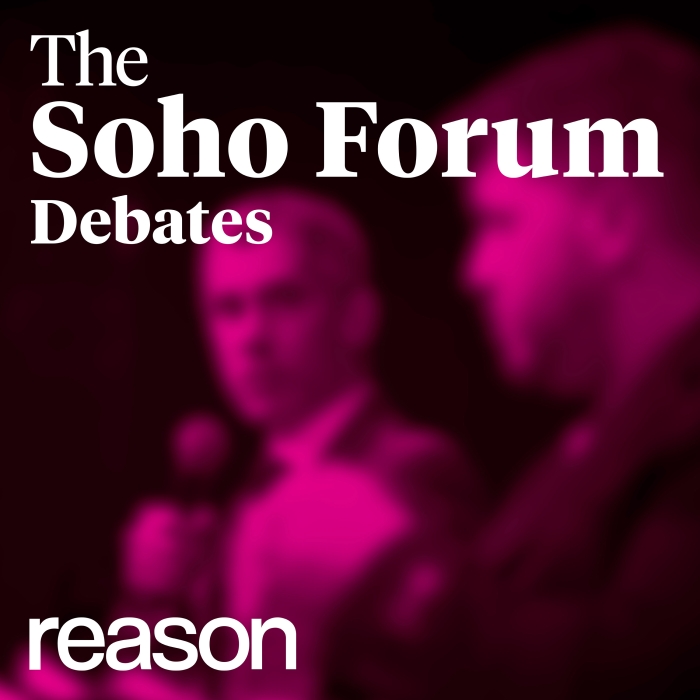 Should We Abolish the Federal Reserve?

Economists Lawrence H. White and Frederic Mishkin debate whether the Federal Reserve should be replaced with free market institutions.

Should We Abolish the Federal Reserve?

A livestreamed debate between Binyamin Appelbaum and Gene Epstein

Is It Time to Eliminate Nuclear Weapons?

Does Climate Science Really Compel Us Toward Urgent Action?

Should the U.S. Be Arming Ukraine Against Russia?

Scott Horton vs. Cathy Young in a live debate at PorcFest, in Lancaster, New Hampshire.

Did Prescription Opioids Cause The Overdose Epidemic?

A Feminist Debate on Sex Work

Send The U.S. Military to Taiwan?

Professor Jonathan Haidt of NYU and Reason's Robby Soave debate the harms of social media and what the government should do about it.

Is the Free State Project a Better Idea than the Libertarian Party?

Does Bitcoin Have the Potential to Become a Generally Accepted Medium of Exchange?

Is More Presidential Power Necessary in the Modern World? A Soho Forum Debate

Should Businesses Only Focus on Shareholder Value? A Soho Forum Debate

Should the U.S. Government Adopt an Industrial Policy? A Soho Forum Debate

American Compass Executive Director Oren Cass vs. the Cato Institute's Scott Lincicome on whether the U.S. should increase its intervention in the manufacturing industry.

The Electoral College: Keep or Replace? A Soho Forum Debate

Who Should Libertarians Vote for in 2020? A Soho Forum Update

Could All Parents Have 'Pandemic Pods' If There Were More School Choice? A Soho Forum Debate

As K–12 education goes remote, groups of parents are hiring teachers to teach their kids in person. Is that wrong?

Does COVID-19 Strengthen the Case for Medicare for All? A Soho Forum Debate

Gerald Friedman of the University of Massachusetts says yes, while the Pacific Research Institute's Sally Pipes says no.

Who Should Libertarians Vote For in 2020? A Soho Forum Debate

The Washington Post's Radley Balko vs. The Manhattan Institute's Rafael Mangual on whether or not "there is overwhelming evidence that the criminal justice system is racist."

Were the Lockdowns a Mistake? A Soho Forum Debate

Physician Marty Makary vs. epidemiologist Knut Wittkowski on whether "the lockdown saved hundreds of thousands, if not millions, of lives."

Is It Time to End the Coronavirus Lockdowns? A Soho Forum Debate

Will Robots Lead to Widespread Joblessness and Economic Inequality?

Martin Ford and Antony Sammeroff debate the future of robotics and its potential economic impacts at the Soho Forum.

Libertarianism and Abortion: A Debate

Walter Block and Kerry Baldwin debate whether women should have the legal right to terminate their pregnancies.

Is Socialism Preferable To Capitalism? A Soho Forum Debate

Should Adults Be Allowed to Use Any Drug They Choose? A Soho Forum Debate

How Can The Libertarian Party Effect Real Change? A Soho Forum Debate

Dave Smith and Nicholas Sarwark debate the 2016 Libertarian Party ballot, what constitutes success in an election, and how to effectively share libertarian principles.

Listen to economists Saifedean Ammous and George Selgin face off at the Soho Forum.

Is Postmodernism Marxist or Libertarian? A Soho Forum Debate

How Secure is Social Security? A Debate

Gene Epstein and Teresa Ghilarducci debate whether the social security trust fund exists or is merely an accounting fiction.

Listen to journalist Nina Teicholz face off against David L. Katz, MD, the founding director of the Yale-Griffin Prevention Research Center, at an event in New York City.

What Caused the 2008 Financial Crisis: Market Distortions or Market Failure? A Debate

Government Caused Housing Segregation. Do We Need More Government to Fix the Problem?

A Crackdown on Cash and Bitcoin? Curbing Crime vs. Empowering the Surveillance State

Economists Kenneth Rogoff and Lawrence H. White face off over what the impact would be of a ban on cryptocurrency and phaseout of the $100 bill.