Some states have lifted their COVID-19 lockdowns or announced plans to let more businesses reopen soon; others have extended stay-at-home orders into late May or even early June. But regardless of what officials dictate, data from Apple and Foursquare suggest the lockdowns are gradually coming to an end on their own anyway, as more people venture out of their homes and resume various levels of economic activity.

"As officials begin the process of relaxing some business restrictions, we're starting to see upticks in foot traffic to various places," Foursquare reported in an April 30 blog post. "This is true across regions, regardless of state-specific policies."

Visits to fast food restaurants and gas stations have already returned to their pre-coronavirus baselines in rural regions, Foursquare reported. While suburban and urban areas are still below normal, those areas have seen 15 percent growth since the end of March.

Gas stations have seen a rebound too. According to Foursquare, gas station visits were down as much as 11 percent from their national averages in the early weeks of April but down only 6 percent for the week of April 24. In some parts of the country—mostly in the Midwest, where the COVID-19 outbreak has been less severe—the visits had returned to pre-coronavirus levels.

Apple's Mobility Trends, which is aggregated from Apple Maps users, shows a similar uptick in the number of requests for directions—an indicator that people are doing more than just driving around their own neighborhoods. While travel in the United States was still down 16 percent from "normal" by the end of last week, there is an undeniable upward trend, one moving faster than in other countries hit hard by COVID-19. 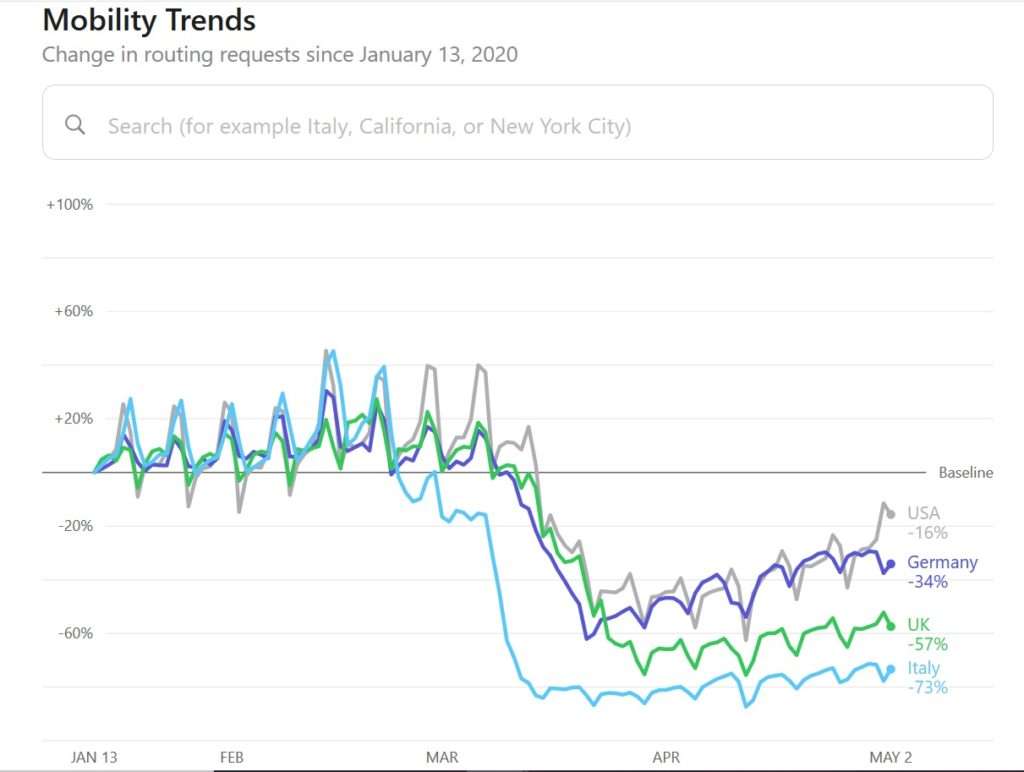 Hardware stores and outdoor activities like hiking trails have seen a surge in activity during the lockdown—at least outside the few states that made bizarre efforts to shut them down—as Americans use the downtime to do some home improvements or reconnect with nature.

Needless to say, a great deal of economic activity is not back to normal. Bars, casual dining restaurants, gyms, and retail shops continue to be hammered by mandatory shutdowns in many states—and by consumer reluctance too. More than 30 million Americans have applied for unemployment benefits since mid-March, and while the uptick in economic activity in the past week or two offers a glimmer of hope, there is a long way to go. 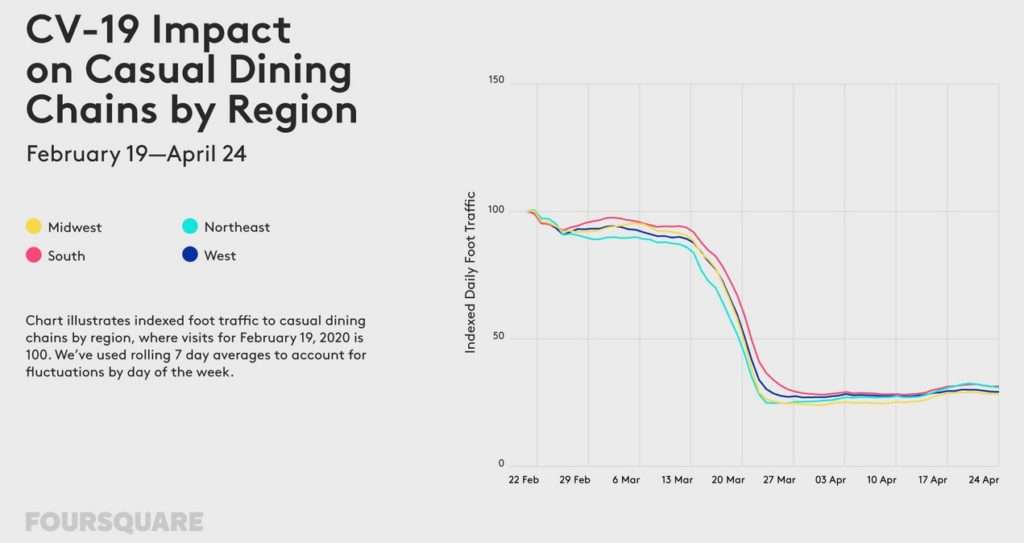 But the Foursquare and Apple data provide policymakers with some critical insights, if they are willing to look. Clearly, individuals have been weighing the risks of the coronavirus against the difficulties of the ongoing lockdowns and deciding to venture out a bit more often. That's good news for businesses that are still open, but it does nothing for those that the government has ordered to close. Those closures should be reversed as much as possible—though obviously with an eye toward social distancing and with limited capacity.

The data also show something about the nature of the shutdowns. They might have been encouraged by executive orders, but they were always ultimately driven by voluntary behavior. Well before states started issuing stay-at-home orders in the final week of March, many Americans were voluntarily self-quarantining.

Since officials had only limited influence over the beginning of the lockdown, they were always going to have limited influence over its ending. This was always unsustainable over the long term, and coronavirus policies need to be reconsidered in light of that. On the other hand, declaring states to be "open" will be meaningless unless residents feel it is safe to venture out again.

Nor is this proof that anti-lockdown protests have worked. Dozens of Americans have descended on state capitals in displays of politicized rage, but the lockdowns are coming undone mostly because millions of other people have simply started going about their lives again, at least as much as they can. They're voting with their feet—and their cars.