It took less than a day for the White House's carefully crafted step-by-step process for reopening the country to be discarded by…the president himself.

President Donald Trump met with governors to outline those plans on Thursday afternoon. On Thursday evening, he stood at the podium in the White House's briefing room to explain how states would be able to reopen their economies in the coming weeks and months by following a three-step process, as long as COVID-19 cases decline. Then, on Friday, Trump issued a series of bizarre (even by his own standards) tweets that seemingly called for residents of three states to defy shutdown orders. 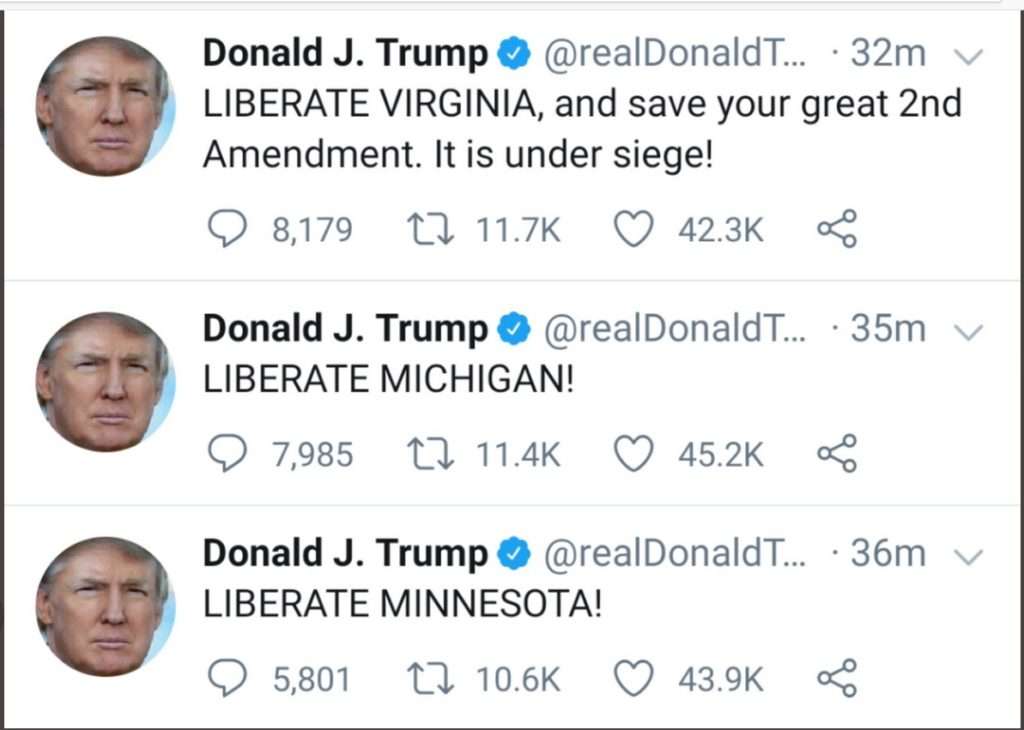 That would, on its own, be pretty weird. Has a president of the United States ever used the bully pulpit to call for residents to revolt against state leaders? But in the context of what's already been a whiplash-inducing week of contradictory messaging from the president, Friday's "LIBERATE" tweets only add to the confusion. Remember, on Tuesday Trump declared that he had "absolute power" to order states to reopen their economies. By Thursday, he'd apparently realized that wasn't correct and had conceded to putting governors in charge. Less than a day later, he's apparently siding with protesters against some of those same governors—governors who were acting in accordance with shutdown guidelines originally pushed by the Trump administration itself.

As is often the case, it's not exactly clear what Trump is suggesting that Michiganders, Minnesotans, and Virginians should do. But it is pretty obvious that there's a tension between the plans Trump (and his coronavirus task force) outlined on Thursday night and an all-caps call to "LIBERATE" some states.

It's also not clear why he picked those three states, although it is worth noting that all three have Democratic governors. While Michigan has already seen some public protests against the overzealous lockdown imposed by Gov. Gretchen Whitmer—her stay-at-home order also forced businesses to stop selling any items deemed nonessential by the state government—the state has also seen a severe coronavirus outbreak in Detroit and its suburbs. The Centers for Disease Control and Prevention (CDC) says Michigan has "widespread" community transmission of the virus and more than 28,000 documented cases. Virginia and Minnesota have lower reported rates of the disease and are under less severe (though still economically ruinous) lockdowns. It's understandable that Trump shares the frustrations many are feeling about over-broad economic shutdowns, but surely he has a more effective way of conveying those concerns to certain state officials.

Trying to figure out exactly what Trump is up to is probably beside the point. One of his greatest weaknesses is an inability to see beyond the current news cycle, and this isn't the first time he's immediately contradicted himself or his staff with an unexpected tweet.

The more important problem is that Friday's "LIBERATE" tweets continue a pattern of inconsistent coronavirus messaging and policy emanating from the White House.

For weeks, the Trump administration's official position was that the virus was not a serious threat. Then, suddenly, it was. When the outbreak started, Americans were told by the surgeon general that wearing masks in public would not slow the spread of the disease. Now, masks are recommended by the CDC and considered mandatory by many states and cities. Trump repeatedly misled reporters and the public about the number of coronavirus tests that would be available. He floated the idea of reopening the country on Easter, then backtracked.

It's unreasonable to expect a president or any public official to have all the answers in the middle of an evolving crisis. But the fact that the federal government—and the White House, specifically—have demonstrated an apparent inability to deliver a believable and consistent message for more than a single day is only adding to the sense of confusion and fear felt by many Americans.

As much as Trump might want to believe otherwise, the economy won't immediately come back to life when he (or various governors) allows businesses to reopen. If Americans are generally fearful of the virus—or, more to the point, if they can't trust public officials who say it is safe to no longer fear the virus—they will continue to stay home, not spend money, and make the recovery from this massive economic collapse even more difficult than it already will be.

On the other hand, the ongoing chaos and confusion will make for great ratings.