After succeeding last weekend in his half-decade-long quest to engineer a "takeover" of the Libertarian Party, Michael Heise, founder and chair of the L.P.'s now-dominant Mises Caucus, crowed on Twitter that the national party had become "the 1st institution to shake off wokism in the country. Now that the party isnt a raging embarrassment we can actually outreach to and funnel so many groups. Bitcoiners, people pissed at schools, the major podcast audiences, etc."

Baked into Heise's optimism is the assumption that the prior L.P. leaders, campaigns, and candidates that the Mises Caucus repudiates—including former three-time national chair (2014–2020) Nicholas Sarwark, the team behind Jo Jorgensen's 2020 campaign, and, above all, 2016 vice presidential candidate Bill Weld—repelled potential voters with milquetoast messaging.

This may indeed be true; political counterfactuals are stubbornly difficult to prove. But what is indisputable is that the Libertarian Party has never had an electoral stretch as successful on the presidential level as 2012–2020: 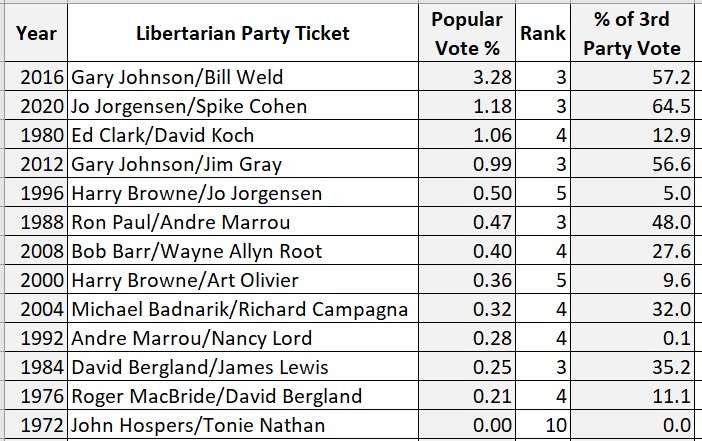 The M.C.-derided Libertarian presidential campaigns of 2016 and 2020 produced the top two voting-percentage results in party history; the 2012 Gary Johnson/Jim Gray ticket ranks a close fourth behind the well-financed Ed Clark/David Koch experiment in the third-party spike year of 1980. The L.P.'s current streak of three consecutive bronze-medal finishes is the longest of any American third party since before the Great Depression.

The most paradoxically impressive result in that stretch might be the one most recent: Jo Jorgensen, with close to zero national name recognition and very little political charisma ("She put the nation to sleep," cracked comedian Robbie "the Fire" Bernstein during a Libertarian convention-adjacent taping of Dave Smith's Part Of The Problem podcast), produced the party's second-highest presidential vote percentage in a year that was brutal for nonmajor candidates and bested Green Party nominee Howie Hawkins in all 50 states.

Before former New Mexico governor Gary Johnson ran in 2012, the high-water mark for an L.P. presidential nominee's share of the non-Democratic/Republican vote was in 1988, when 48 percent of that electorate pulled the lever for future Mises Caucus hero Ron Paul. Johnson/Gray topped that figure with 56.6 percent in 2012; Johnson/Weld inched upward to 57.2 percent, and Jorgensen/Spike Cohen brought it all the way up to 64.5 percent. The gang that went 0 for 4 against Ralph Nader has, within three election cycles, become the third party in the United States.

Will that streak continue, now that the L.P. has been taken over by a caucus highly critical of the people who produced those comparative successes? Twenty-nine months is an eternity in modern politics; at this point four years ago, the party's top three presumed 2020 candidates were Bill Weld (who would end up running and losing badly as a Republican), John McAfee (who was arrested in Spain on U.S. tax evasion charges in October 2020 and found dead in his jail cell eight months later), and Adam Kokesh, who wound up finishing sixth.

As of this very early moment, the two main potential 2024 Libertarian presidential candidates are comedian/podcaster Dave Smith, who has the strong backing of the Mises Caucus, and former congressman Justin Amash, who in his convention keynote speech trolled the caucus by getting them to boo blind quotes from their namesake economist, Ludwig von Mises. Amash played Hamlet in the 2020 race and then abruptly dropped out just before the nominating convention, citing among other factors the adverse third-party electoral environment created by heightened negative polarization, though many insiders suspected that L.P. dysfunction may have also scared him off.

That external polarization and internal cat-herding may well continue in the 2024 cycle and could yet dissuade Amash from running. He and other prospective non-Mises Caucus candidates may not relish spending two-plus years being asked by reporters to respond to such headlines as "Kentucky Libertarian Party compares 'vaccine passports' to stars Jews wore in Holocaust," and "The Libertarian Party of New Hampshire Ripped for Tweeting 'Libertarians Suffer More Oppression Than Black People.'"

That kind of outré messaging, which correlates strongly with Mises Caucus influence on state affiliates, has already turned some people away from the party, to which the general vibe from the victorious side has been: Good riddance.

"After decades of disappointing presidential campaigns and zero mainstream media coverage, the LP needed a new direction and the Ron Paul Revolution needed an infrastructure to become influential in the political discussion in 2022 and beyond," the anonymous Being Libertarian website asserted in a post-convention victory lap of a post. "It means the Libertarian Party just got a lot less woke….[And] the Libertarian Party will become more friendly to disgruntled Republicans."

Whether there's an untapped reserve of anti-woke Ron Paul fans that can overcome the loss of previous L.P. voters turned off by the party's new messaging will depend in no small part on who ends up winning the Republican and even Democratic nominations. Former President Donald Trump remains the man to beat in the GOP, but his star is waning measurably, while Florida Gov. Ron DeSantis moves up in the polls and prediction markets. It's hard to picture an edgier, more right-leaning Libertarian social media game competing meaningfully against the master; meanwhile, DeSantis grows more Trumpy by the day.

President Joe Biden, meanwhile, is not only old and unpopular; a majority of Democrats and Democrat-leaners want another candidate to run in the 2024 primaries.

On the one hand, you would expect a redux of Biden vs. Trump, with their demonstrated track records of government-expanding incompetence and alienating independents, to be the perfect opening for a youthful and articulate small-government guy like Amash. On the other, Trump is a one-man base-rallier for Democrats; the dark economic clouds on the horizon favor a pendulum swing against the incumbent, and both sides are on the verge of being heavily motivated by abortion politics. If that's not enough to scramble your calculations, close your eyes and imagine a DeSantis vs. Kamala Harris race, with Dave Smith lobbing rhetorical bombs and insult comedy.

Another potential X-factor is competition from other third parties. While the Greens seem relegated to also-ran status as long as lefty voters remember Trump vs. Hillary Clinton, Andrew Yang's centrist Forward Party is starting to achieve ballot qualifications, and the kinda-sorta Christian Democratic American Solidarity Party had an earlier start. There's still plenty of time between now and 2024 for party-building, though the work is a slog, and the Libertarians, for all their foibles, have been stomping the competition for more than a decade now.

For the moment, in the absence of national political attention for the foreseeable future, much will depend on how the Mises Caucus decides to flex its power. Newly elected Party Chair Angela McArdle in her winning pitch to delegates repeatedly stressed the primacy of "bold messaging," particularly on social media.

"Messaging is the face of the party," McArdle wrote. "Social media is usually the first thing someone sees when they interact with us as an organization. Social media has the changed the political landscape. The days of 'reading about something' have been replaced by the experience of 'interacting with something'. Unfortunately, our messaging at the national level has a very self-conscious tone. We need to move away from 'low self esteem' messaging."

Is that a license for outrage-courting edgelordia? Not so fast, McArdle insists: "Simply put, bold messaging is messaging that is not watered down and does not take an apologizing, embarrassed tone about libertarian topics[.] Is bold messaging shit posting? No. Bold messaging is courageous, and it tells the truth."

If in 2012 you were to have told Gary Johnson and retired Judge Jim Gray—decent gentlemen both—that the future success of the party they were then helping bring to the next level would depend in part on the line between "shit posting" and telling the truth, they would have probably looked at you funny. Yet, that is the world that both the Libertarian Party and the rest of the United States find themselves in now.

McArdle and her winning cohort still have some time before the outrage archeologists in the competition and the press start combing in earnest through the old tweets and podcast episodes. We shall soon see how much the new Libertarian Party orients itself around social media controversy and what kind of audience that attracts.