In the wake of the January 6 Capitol riot, many Democratic politicians and left-of-center pundits have been calling for the expanded use of "domestic terror" laws against people whose social media rhetoric seems too radical. Those who warned that this would backfire—being used not just against those who have committed crimes but anyone whose political views or online comments are deemed risky—were accused of things like excusing terrorism or aligning with white supremacists. Yet it hasn't taken long for these warnings to come to fruition.

Look at the case of Daniel Baker, a military veteran and self-professed "hardcore leftist" whose home was recently raided by the FBI after he posted a flyer online calling for folks to fight back if "armed racist mobs" tried to take the Florida statehouse in Tallahassee. "This is an armed COUP and can only be stopped by an armed community," Baker wrote. 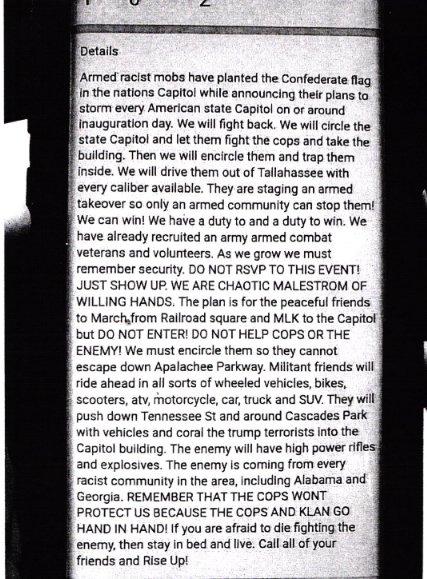 In this example, The Washington Post sees evidence that right-wing extremists are "fueling potentially legitimate threats of violence from the opposite fringe of the political spectrum." But "potentially" is doing a lot of work in that sentence.

Baker's social media post promising to return intimidation and violence with intimidation and violence doesn't mean he was actually planning an attack on anyone. It's the kind of tough-talk rhetoric common online and in-person—if you come at me I will come at you. And absent other evidence that Baker was plotting some sort of revolt, it is absolutely not the sort of thing that should be garnering law enforcement action, let alone an FBI raid.

If this is the standard going forward, a whole lot of people across the political spectrum are going to find themselves in trouble. Meanwhile, the work of stopping actual terrorism and violence will be made harder, as federal agents spend increasing amounts of time investigating, targeting, and prosecuting people for harmless posts.

"This is nuts," commented the Cato Institute's Julian Sanchez. "Unless I'm missing something, this guy was arrested for writing flyers featuring rhetoric indistinguishable from what thousands of people say on message boards or Facebook without prompting visits from the FBI." While rhetoric like this might be "disgusting," people should not be arrested "on this basis alone," Sanchez added.

In the criminal complaint against Baker, FBI Special Agent Nicholas Marti accuses him of "using social media to recruit and train like-minded individuals in furtherance of his Anti-Government or Anti-Authority Violent Extremism Ideology."

Baker "may attempt to violently disrupt protest," Marti opined, explaining that the basis for this opinion that Baker used social media to "project his displeasure with the current events unfolding in the United States as well as social issues he believes to be plaguing the country, including police brutality."

Apparently, complaining about U.S. police brutalizing and killing Americans without consequence is now grounds for the FBI to start monitoring you.

Baker "made multiple violent threats," Marti goes on to allege. And yet the "probable cause" Marti gives mostly includes things like Baker having traveled to Seattle over the summer to protest, posting online about wanting to buy a gun, posting clips from a podcast with the word anarchist in the title, posting a video about first aid for protesters, or taking pictures of U.S Marshals who were investigating his roommate in unmarked vans.

One "threat" that Marti includes is a post where Baker says he may start having to rob "the rich and pedophiles too" so he wouldn't "wind up homeless and hungry again."

Another "threat" the FBI agents cites is an "eat the rich" meme.

Another "threat" offered is Baker offering to pay cash for information on the identities of Capitol rioters.

A few posts used against Baker do include pledges of violence—but only if and in response to direct violent threats from others. The closest thing to a non-self-protective pledge of violence is an Instagram post where Baker writes "If you don't take up arms against trump them (sic) you are coward"—posted during the time period where it seemed former President Donald Trump might not actually peacefully cede power. (One man's "violent threat" is another's pledge to defend democracy.)

"If nothing else, Baker's case shows how easily the martial climate that has prevailed since the Capitol riot can be turned on unrelated individuals who hold vastly different beliefs," suggests Branko Marcetic at Jacobin.

Baker's case is not unlike the government's prosecution of even nonviolent pro-Trump protesters at the Capitol, which has rested partly on inflammatory social media posts and statements of their own. This is a particularly easy standard to apply to the Left, whose staunchest pacifists use slogans and engage in activities that law enforcement and prosecutors can misconstrue as scary and violent.

In this way, the vow of Larry Keefe, the US attorney who announced Baker's arrest, to go after "extremists" and "terrorists" across the spectrum in the wake of the riot is especially loaded. Keefe is a Trump appointee whose confirmation was secured by his pro-Trump ally, Representative Matt Gaetz. Gaetz has baselessly blamed antifa for the events at the Capitol, and last year wanted to "hunt them down like we do [terrorists] in the Middle East."

This isn't isolated. New York police recently cracked down on Martin Luther King Day marchers, with the city's mayor citing the Capitol riot as justification. Republican lawmakers across the country swiftly used the riot to repackage and rush through anti-protest bills they first devised in response to last year's anti-police brutality protests, most notably the vehemently pro-Trump Florida governor, Ron DeSantis. It's exactly what both liberal and conservative authoritarians hoped for in the wake of the riot: that anything done in response to the pro-Trump crowd that stormed the Capitol would be later used to clamp down on protest from the left.

Is Clubhouse a mirage or the next big thing in online media? Clubhouse—a "buzzy new Silicon Valley app Clubhouse, where users gather in audio chatrooms"—is poised to "become a global phenomenon," suggests the Financial Times.

A lot of hype—and money—is riding on the app's success. Although it is not yet a year old and has just two million weekly active users, backers such as VC firm Andreessen Horowitz are reported to have valued it as a billion-dollar company.

That puts it in the realm of unicorns — start‑ups deemed so promising they warrant sky-high values and which are expected to let early investors cash out with huge gains. It took Facebook, now a $770bn company, two years to reach such heights.

Auditing the rich is hard. It takes senior auditors hours upon hours to complete an exam.

They are "the most efficient use of available IRS examination resources." https://t.co/ODGxckqXf6

• The new book Resetting the Table: Straight Talk About the Food We Grow and Eat "is a refreshing change of pace from most of the other food books, which tend to be illiterate on the economic side," writes George Mason University economics professor Tyler Cowen.

• Ohio mother Shaina Bell "has been arrested for leaving her kids, a 10-year-old and a 2-year-old, in a motel room while she worked her shift at a pizza shop," notes Lenore Skenazy. Bell told police she usually checks in on them every hour. "She was booked into jail on two counts of child endangerment."

• The trouble with "anti-human trafficking" apps.