Twitter expands definition of doxxing to include links to publicly available information. Twitter CEO Elon Musk has suspended the accounts of multiple tech journalists. The suspended journalists include reporters for Mashable, CNN, The New York Times, and The Washington Post. Musk also suspended the account of the decentralized social network Mastodon.

Musk's move comes after he suspended an account (@ElonJet) that shared publicly available information about his flight plans. A few weeks ago, Musk made a big deal about not banning the account, tweeting "my commitment to free speech extends even to not banning the account following my plane." But like so many of Musk's free speech principles, this one appears to have been short-lived. 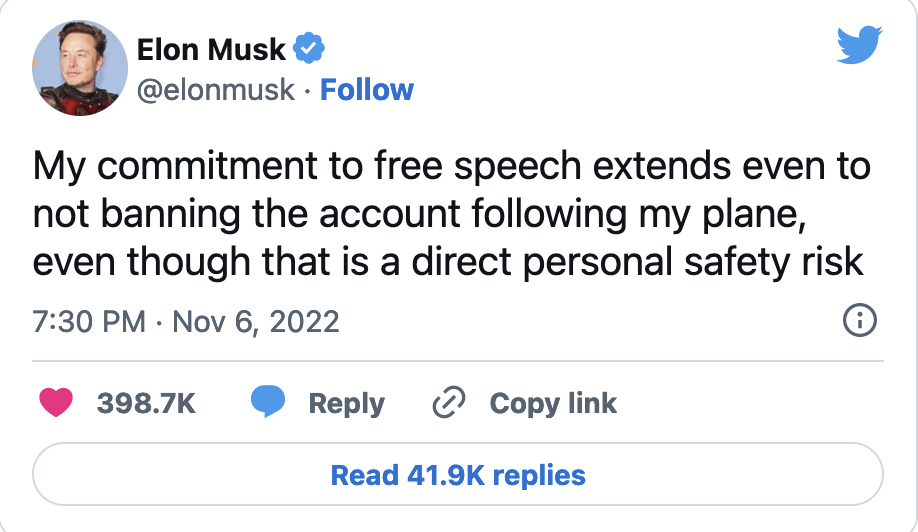 Musk claimed the @ElonJet account violated Twitter's policy against doxxing—revealing private information about another person. That's a stretch, since Musk's flight plans come from public records. But doxxing tends to get defined vaguely and broadly these days, and at least the @ElonJet account could plausibly fall somewhere within these parameters.

Meanwhile, Mastodon was banned simply for linking to an account on its platform that tracked Musk's jet. Now, "many links to Mastodon no longer work on Twitter, which flags them as 'potentially harmful,'" notes TechCrunch.

Washington Post journalist Drew Harwell then shared a screenshot of Mastodon's tweet; he was suspended. Pundit Keith Olbermann called on people to retweet Harwell; Olbermann was then suspended, too. It's unclear for how long any of these accounts will be suspended.

It's also unclear precisely what got each of the suspended journalists the boot, but Musk implied they were all guilty of violating Twitter's anti-doxxing policy. "So far, i've been able to confirm about half the accounts suspended posted links to the jet tracker thing," tweeted Founders Fund Vice President Mike Solana, to which Musk responded: "Same doxxing rules apply to 'journalists' as to everyone else."

The suspended tech reporters don't seem to have actually doxxed Musk by any normal understanding of the word. But earlier this week, Twitter's doxxing policy was updated to make the @ElonJet account and people sharing links to Musk's (public!) flight information elsewhere a direct violation. As recently as Tuesday, it said that you couldn't share "home address or physical location information, including street addresses, GPS coordinates or other identifying information related to locations that are considered private." Now, it includes "live location information, including information shared on Twitter directly or links to 3rd-party URL(s) of travel routes, actual physical location, or other identifying information that would reveal a person's location, regardless if this information is publicly available." In other words: Twitter changed its doxxing policy precisely to target activity that seemed to bother Musk.

Twitter is a private company, so it can certainly ban users—including journalists—for any or no reason. But Musk's decision to do so is one more nail in the coffin of the "free speech absolutist" label he was posturing toward.

It's also yet more evidence that the new Twitter isn't going to be better than the old Twitter, which was given to silly-seeming reasons for bans and sometimes stretching its terms and conditions to justify action against inflammatory or controversial accounts. Arguably, Musk's Twitter is even worse, since these moves are not being made by misguided, low-level content moderators or a team of deliberating individuals but the whims of one thin-skinned dude who also happens to be the head of the company.

Say what you will about Jack Dorsey, Twitter's founder and former head, but he stayed relatively removed from day-to-day suspension and banning decisions, and was never known to take action against anyone for criticizing, mocking, or reporting badly on him.

Meanwhile, Musk is establishing a pattern of lashing out against people who seem to anger or offend him personally—and changing Twitter's official policies in order to justify it. Last month, Musk suspended the accounts of people who were parodying him after changing Twitter's rules to say that parody must be clearly labeled as such in account handles. 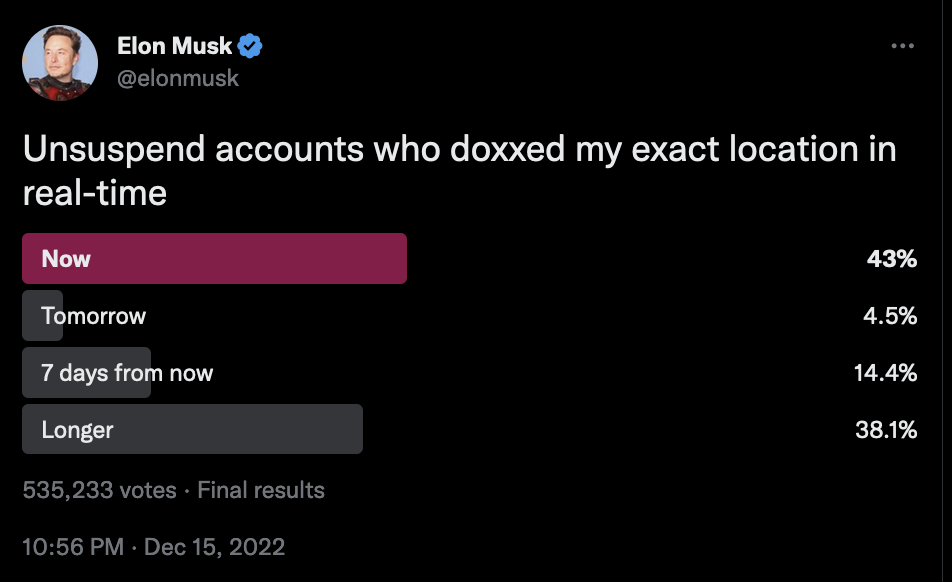 Further showcasing a lack of principles, Musk ran a Twitter poll yesterday asking when he should allow the suspended tech journalists to return to Twitter—then balked at following through when people voted that they should be reinstated immediately. ("Sorry, too many options. Will redo poll," Musk tweeted.) When Musk polled people about whether to let former President Donald Trump back on and the answer was yes, Musk respected the results and reinstated Trump's account (tweeting "Vox Populi, Vox Dei," a.k.a. "the voice of the people is the voice of God").

It seems Musk's "power to the people" mantra only applies when the people agree with what Musk himself wants.

This is the song that never ends…

???? @SenMikeLee has introduced a bill that would remove porn's First Amendment protections, and effectively prohibit distribution of adult material in the US. FSC is monitoring the bill, and will continue to do so in the new Congress. https://t.co/ofx2kCsacA

IRS releases private data about taxpayers … again. "Confidential data of about 112,000 taxpayers inadvertently published by the IRS over the summer was mistakenly republished in late November and remained online until early December," reports Bloomberg:

Form 990-T data that was supposed to stay private had been taken offline but made its way back to the IRS site when a contractor uploaded an old file that still included most of the private information, a letter sent Thursday to congressional leaders said. The agency is required to make Form 990-Ts filed by nonprofit groups available online but is supposed to keep the form filed by individuals private; in both cases, the agency made that information available too.

An internal programming error caused the September release of private forms along with the ones filed by nonprofit groups, the letter said. This time, the contractor tasked with managing the database reuploaded the older file with the original data instead of a new file that filtered out the forms that needed to be kept private.

As of December 1, the information that was supposed to be taken down was back online and the IRS only learned about it after being alerted by a third-party researcher. The forms did not contain Social Security numbers, but some contained names and contact information.

• "The U.S. Senate approved a one-week extension of federal government funding, averting a partial government shutdown that was scheduled to begin Saturday," reports CNBC. "The measure, which passed 71 to 19, gives lawmakers an additional week to negotiate and pass a comprehensive bill to fund federal agencies through the fiscal year, which ends Sept. 30."

• Tomorrow is International Day To End Violence Against Sex Workers. More on the day's history, events, and mission here.

• Internal memos from the Food and Drug Administration show the agency's regulation of electronic cigarettes is based more on dubious value judgments rather than science, suggests Reason Senior Editor Jacob Sullum. "The memos came to light thanks to a lawsuit that Logic Technology filed against the FDA after the agency approved the marketing of the company's tobacco-flavored e-cigarettes but rejected applications for menthol-flavored versions. The documents show that higher-ups in the FDA overrode staff scientists who initially recommended approval of the latter applications."

OK, here's a First Amendment lawsuit for you:

A woman is suing the city of Tallahassee after she was removed from the Citizen Police Review Board for having a cup with an "abolish the police" sticker on it https://t.co/s1xmtMw53D pic.twitter.com/KqYt8O1xf2

• Politics is getting in the way of what makes cities great.

This is your periodic reminder to never take a police polygraph.