A man arrested in a 2019 sting operation at Florida massage parlors is now suing over what he alleges was unconstitutional surveillance by the U.S. Department of Homeland Security (DHS) and Florida detectives. The arrest was part of a large-scale prostitution bust that prosecutors falsely portrayed as a mission to rescue "human trafficking" victims working at Asian massage parlors. The workers have wound up being the only ones in legal trouble.

The operation—carried out by cops in three Florida counties and aided by federal agents—gained national media attention after New England Patriots owner Robert Kraft was charged with soliciting prostitution as part of it.

In Palm Beach County, the state recently dropped the charges against Kraft and a few dozen other men charged with solicitation, after a federal court ruled the surveillance video underlying these cases was illegally obtained.

In nearby Indian River County, more than 150 men were charged with solicitation as a result of the same operation. Their charges have also been dropped. Now, one of them has filed a federal civil lawsuit to see that this sort of thing doesn't happen again.

Keith Taig is seeking to obtain class-action status for himself and anyone who was surreptitiously filmed while visiting the Vero Beach–based East Spa between November 29, 2018, and January 27, 2019, and subsequently slapped with criminal charges. "This class action stems from an egregious constitutional violation of the class members' fundamental right to privacy guaranteed by the Fourth Amendment to the United States Constitution when they were surreptitiously monitored, and illegally recorded, and filmed," states Taig's complaint, filed in the U.S. District Court for the Southern District of Florida.

Massage Worker Cases the Only Ones Not Dropped

While prosecutors dropped all cases against the men who were surveilled, publicly humiliated, and used to make claims of a sham trafficking bust, the women who these men patronized did not get off so easy. In fact, the only people prosecuted in this "human trafficking bust" have been the women who staffed these massage businesses—the very people police assured the public that they were in this to save.

Four massage workers arrested in the Indian River County busts have already pleaded guilty to prostitution. Two additional female defendants are still staring down serious charges (to which both have pleaded not guilty).

East Spa owner Liyan Zhang, 43, was charged with 30 counts of engaging in prostitution herself, along with operating a house of prostitution (a felony) and racketeering (a felony charge often tacked on to prostitution cases if two or more sex workers band together). 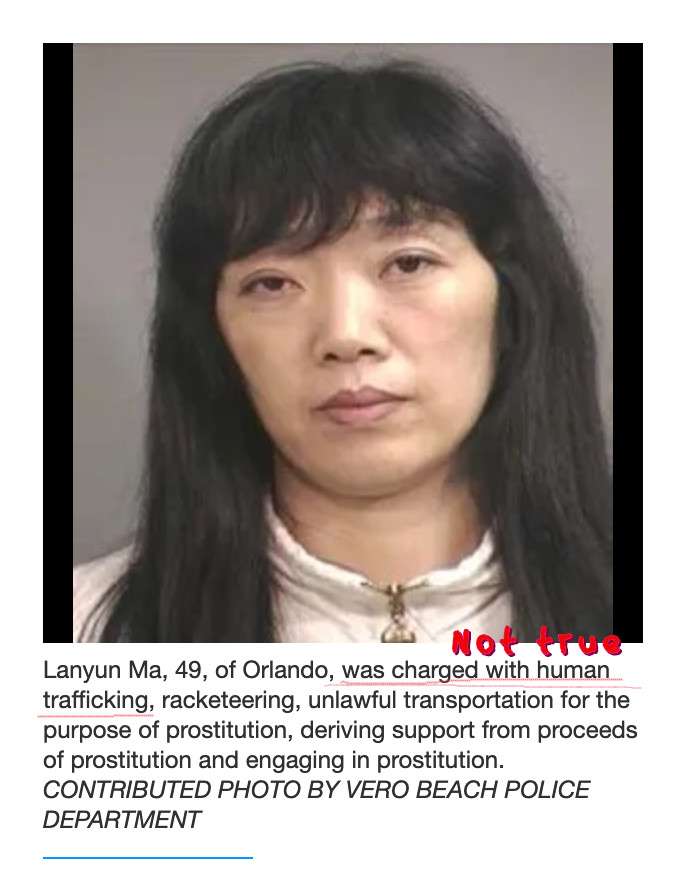 Lanyun Ma, 51, who reportedly managed East Spa and nearby AA Massage, has been charged with misdemeanor engaging in prostitution and three felonies: deriving support from prostitution, transportation for prostitution, and racketeering.

Some local press continues to report that Ma stands accused of "human trafficking," although no such charges exist. They are not listed on an initial February 2019 arrest warrant for Ma, nor are they listed among her charges now. (It's unclear why TCPalm, which directly cites court documents in reporting on Ma's case and has access to the same information that I do, has repeatedly made this false claim.)

Prosecutors are still planning to use the surveillance footage deemed off-limits in the male defendants' cases in their prosecutions of Zhang and Ma. Though the woman moved to have the footage excluded and a court initially agreed, an appeals court reversed that decision.

Authorities obtained the "sneak and peek warrant" to install surveillance cameras at East Spa by claiming the spa staff was guilty of running a "criminal enterprise" involving prostitution. Notably, they did not claim to judges that any sort of forced labor or "sex trafficking" was involved.

This omission is significant for several reasons:

In granting Vero Beach police an "Affidavit for Surreptitious Entry and Installation of Electronic Surveillance Camera" at East Spa, a county judge laid out several conditions. They could monitor—but not record—inside the spa; they could not do it for more than 30 days; they must give the judge a progress report after 10 days; and they must attempt to minimize recordings of people "not engaged in the unlawful acts set forth in the affidavit."

These orders were almost entirely disregarded.

Authorities did not simply hide cameras in common areas (which would have been enough to ascertain who was involved in running or managing the place, which was the activity the affidavit covered) but instead installed them in individual massage rooms, where they could capture footage of anyone getting a massage. They did not simply monitor what was going on in real time but recorded and kept video footage. And they did not check back in with the judge after 10 days.

After recording East Spa massage rooms 24 hours per day for a month, police say they had evidence of more than 100 customers paying extra for sexual stimulation—more than enough to make prostitution cases against the spa managers stick. Nonetheless, they applied to another judge for permission to keep the cameras there for another 30 days.

Ultimately, authorities engaged in months of round-the-clock external video surveillance outside East Spa, put secret location trackers on the cars of spa staff, dug through the business's trash on multiple occasions, sent in several rounds of undercover cops to receive massages, conducted audio surveillance from a neighboring business, and recorded two months' worth of video footage inside massage rooms.

Since this started in August 2018, no federal charges resulted. Nor did local police convict or even charge anyone with forced labor, immigration fraud, forced prostitution, or anything that might live up to the "human trafficking" moniker. And while police have occasionally alluded to "victims" rescued, the lack of any details or related charges cast doubt on this claim.

Further betraying the rescue narrative is a detailed Associated Press account of how one sex worker was pressured to call herself a sex trafficking victim under the threat of being arrested on prostitution charges if she didn't. It seems likely that this woman and others similarly situated (perhaps those who ultimately were convicted of prostitution) are the basis for police tall tales.

At a press conference televised on CNN, local cops spoke of "hundreds" arrested as part of their purported rescue mission. The vast majority of these arrests were the men merely accused of paying consenting women, in cases that would later be dropped. But back in February 2019, authorities broadcast these men's names and mugshots as people involved in a suspected human trafficking ring.

As Indian River, Martin, and Palm Beach County prosecutors proceeded with misdemeanor solicitation charges against them, defendants in all three counties (including Kraft) filed motions to suppress the surveillance video footage.

"Clearly anyone seeking a massage in a professional setting has a reasonable subjective expectation of privacy," Florida Judge Nicole P. Menz wrote in a May 2019 order granting suppression of the video. "Therefore the defendant had a legitimate expectation of privacy that is protected by the Fourth Amendment to the United States Constitution."

The state appealed, but Florida's 4th District Court of Appeal agreed that the video footage should be suppressed.

Now, some of these defendants are hoping to see local authorities pay for their invasions of privacy.

Police "exhibited an intentional and blatant disregard of the rights provided by the Fourth Amendment to the United States Constitution" and "could not have reasonably believed or concluded that their actions were constitutionally permissible," alleges Taig's lawsuit against Vero Beach and members of its police department. He is seeking "compensatory and punitive damages" for him and others whose privacy was violated.

Another man arrested in conjunction with this faux-trafficking sting is suing the Martin County Sheriff's Office; a trial date has been set for July.

Meanwhile, lawyers for the Indian River County solicitation defendants are also seeking to have the surveillance video destroyed, as a judge ordered to happen in the Palm Beach County cases.