Reason is supported by:
David Cann

United Nations (U.N.) votes to reschedule marijuana. In a close 27 to 25 vote (with one abstention) on Wednesday, members of the United Nations Commission on Narcotic Drugs (CND) backed a World Health Organization (WHO) proposal to take cannabis and cannabis resin off the list of Schedule IV drugs—i.e., those which the international body says are "particularly liable to abuse and to produce ill effects" and should therefore be most strictly controlled around the world. Schedule IV drugs include heroin, fentanyl, and—from 1961 until now—cannabis.

Today's "historic vote in Vienna could have far-reaching implications for the global medical cannabis industry, ranging from regulatory oversight to scientific research into the plant and its use as a medicine," writes Alfredo Pascual at Marijuana Business Daily. "The result carries broad symbolic significance for medical cannabis, as it could help boost medical cannabis legalization efforts around the globe now that the CND tacitly acknowledges the medical utility of the drug."

While the U.N. vote "doesn't totally free the plant from treaty control, it's a giant step toward the normalization of cannabis in medicine above all but also in our societies generally," researcher Kenzi Riboulet-Zemouli told Marijuana Business Daily. 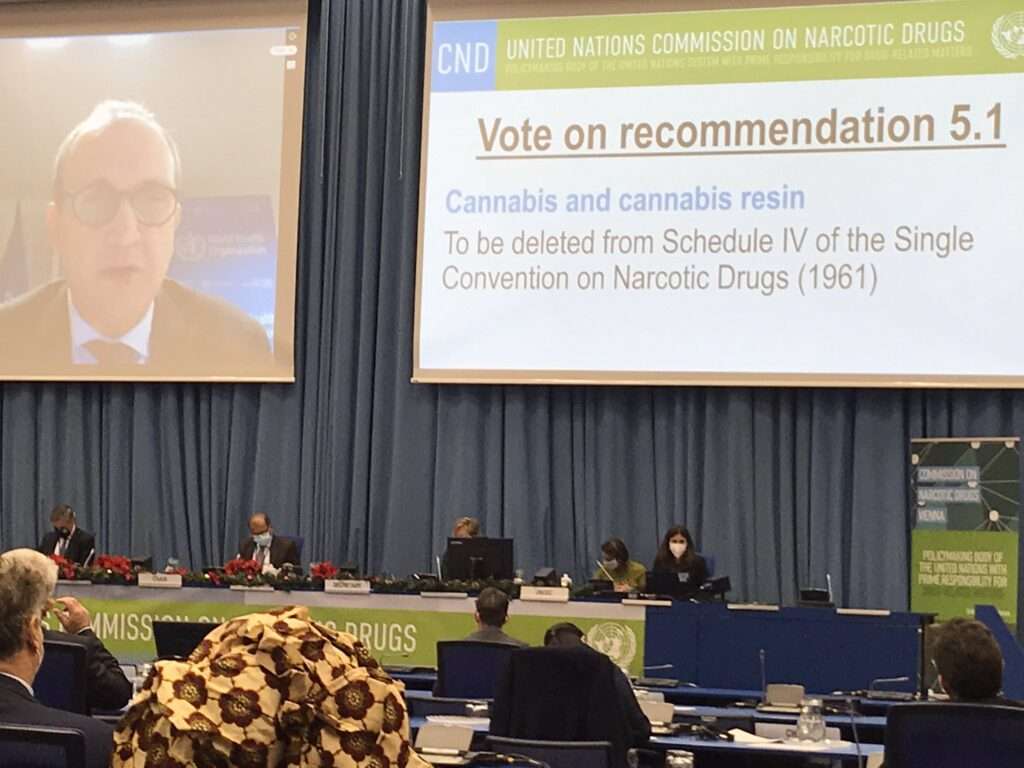 The U.N.'s move follows a WHO recommendation that cannabis ought to be rescheduled.

"In strictly legal terms this is not a major change, because the recommended prohibition of cannabis including for medical purposes, that comes with Schedule IV substances, was never obligatory," explained Martin Jelsma last week, in the lead-up to the U.N. committee vote. "But it still makes a big difference, because until today there has been a UN treaty that explicitly advises NOT to use cannabis for medical purposes. The WHO has now given an unequivocal sign of support for medical cannabis programmes"—and, as of today, the U.N. has as well.

These recommendations might not be legally binding, but they can wield significant influence around the globe.

For instance, after the WHO change, Argentina's government "issued a decree authorizing sales and self-cultivation of cannabis for medical use, and the justification explicitly refers to the outcome of the critical review and the WHO recommendation to delete cannabis from schedule IV," noted Jelsma.

@WHO recommended the (re-)scheduling for cannabis and cannabis-related substances. More information on the recommendations and the work done by @CND_tweets in the lead up to the 63rd reconvened session is contained in the conference room paper: https://t.co/5JubnJVs3Z pic.twitter.com/vfRFsLQkQT

The rescheduling "is even more important when you consider that cannabis was placed into Schedule IV without ever having been subject to any scientific assessment," suggests For Alternative Approaches to Addiction Think & do tank (FAAAT) in a press release. "Schedule IV for cannabis is a relic of the most extreme international drug laws inherited from 1950s morals … The removal from Schedule IV is, therefore, phenomenal news for millions of patients around the world and a historical victory of science over politics."

Trump says he'll veto the defense bill if it doesn't repeal Section 230. I noted in yesterday's Roundup that Republicans were trying to work an overhaul or repeal of Section 230—a law that protects free speech in the digital sphere—into the latest defense spending bill. The move was reportedly being done at the White House's behest.

Last night, President Donald Trump took the pressure a step further, tweeting that he would veto any National Defense Authorization Act (NDAA) unless it saw that Section 230 is "completely terminated."

As Reason's Eric Boehm commented: "If the choice is between 'having free speech online' and 'having the world's most expensive military' that's not a very difficult decision."

False. Section 230 applies to everyone on the internet, including traditional media, The Trump Organization, him, you, and me. In fact, it became law before most social media existed. It promotes the freedom of speech by ensuring you're not liable for things *other* people say. https://t.co/KH2POJc4np

Good news for the Open Courts Act of 2020. The legislation would make federal court records accessible without a special subscription to the PACER system and its exorbitant fees.

Passed UNANIMOUSLY (!!) out of @HouseJudiciary, the Open Courts Act of 2020 would eliminate the #PACER paywall, making court records free and accessible to all.

This bill encourages trust in the judicial process and facilitates oversight of the judiciary. It deserves a vote! ⬇️ https://t.co/tnV4xyVkhk

Next time someone tries to tell you that Amazon or other tech companies are a monopoly:

This year sales on Shopify will probably be 40-45% of sales on Amazon Marketplace. pic.twitter.com/UVIZvjScP3

• The U.K. has approved Pfizer/BioNTech's COVID-19 vaccine and "the vaccine will be made available across the UK from next week," the U.K. government announced today.

• The Los Angeles Times is suing the U.S. Department of Homeland Security over its refusal to release records related to immigrant detention centers in California.

• In the face of massive protests, French lawmakers are walking back plans to criminalize the filming of police officers.

I got hold of some internal documents that show just how absurd and confusing they are…https://t.co/2U7b9lanqE pic.twitter.com/wvriLsyn7P

Wow— Beverly Hills City Council unanimously approved a resolution tonight that opposes LA County's ban on outdoor dining, citing lack of scientific evidence. They demanded a motion be placed on the Board of Supervisor's agenda next Tuesday to reverse the controversial ban.