Separated by sheets of plexiglass, the 2020 vice presidential nominees engaged in a debate that otherwise felt normal—so normal that it was disorienting. For a moment, we all remembered what politics was like in the pre-Trump era. There was much less shouting, that's for sure. The whole tone was a lot more dignified, just dripping with civility and old-school talking points. Most people seem to think that's a good thing (though I'm not entirely convinced).

Vice President Mike Pence did the best he could with what he had to work with, giving well-worn Trumpian spin a calm and reassuring facade while hearkening back to an earlier Republican era. Pence is AM talk radio, the Bush years, and think-tank staff in bowties, not memes and Twitter trends and cultural grievances. He's soothing—and it scares me, in the same way that Sen. Kamala Harris scares me.

Both Harris and Pence serve as a reminder of how potent bad ideas and policy can be when they come in a competent and relatively uncontroversial package. For all of Pence's dignity and calm, he still was up there defending the actions of President Donald Trump and promising more of the same. Meanwhile, Harris leaned into the tough-but-progressive-on-crime look that she has spent her career cultivating—and enacting in ways not noticeably different from plain old tough-on-crime policies.

Last night, Harris again tried to have it both ways on criminal justice. She promised to decriminalize marijuana and made other nods to policing and prison reforms. But at the same time, she talked up her (highly destructive) past in law enforcement.

"I think Joe asked me to serve with him because I have a career that included being elected the first woman district attorney of San Francisco, where I created models of innovation for law enforcement, in terms of reform of the criminal justice system," she said near the beginning, adding that she was the first "black woman to be elected attorney general of the state of California, where I ran the second largest department of justice in the United States."

Harris promised that a Biden-Harris administration would offer more of the same.

"Having served as the attorney general of the state of California, the work that I did is a model of what our nation needs to do and we will be able to do under a Joe Biden presidency," said Harris.

As attorney general, Harris tried to keep people locked up in overcrowded prisons after a court said they should be released, fought against a ruling that the state's death penalty was unconstitutional, opposed making police wear body cameras statewide, refused to endorse sentencing reform measures, argued for the destruction of the online-speech-protecting law known as Section 230, refused to intervene in a case where myriad cops and prosecutors in her old district were accused of child exploitation, posed for photo ops with the Border Patrol, chased publicity with unconstitutional prosecutions, and made it a major initiative to punish parents whose kids missed school.

Harris bragged twice last night about having "prosecuted the big banks for taking advantage of America's homeowners." But the money she won in that case didn't go to help struggling homeowners. Instead, the settlement money was used to pay off state debt. 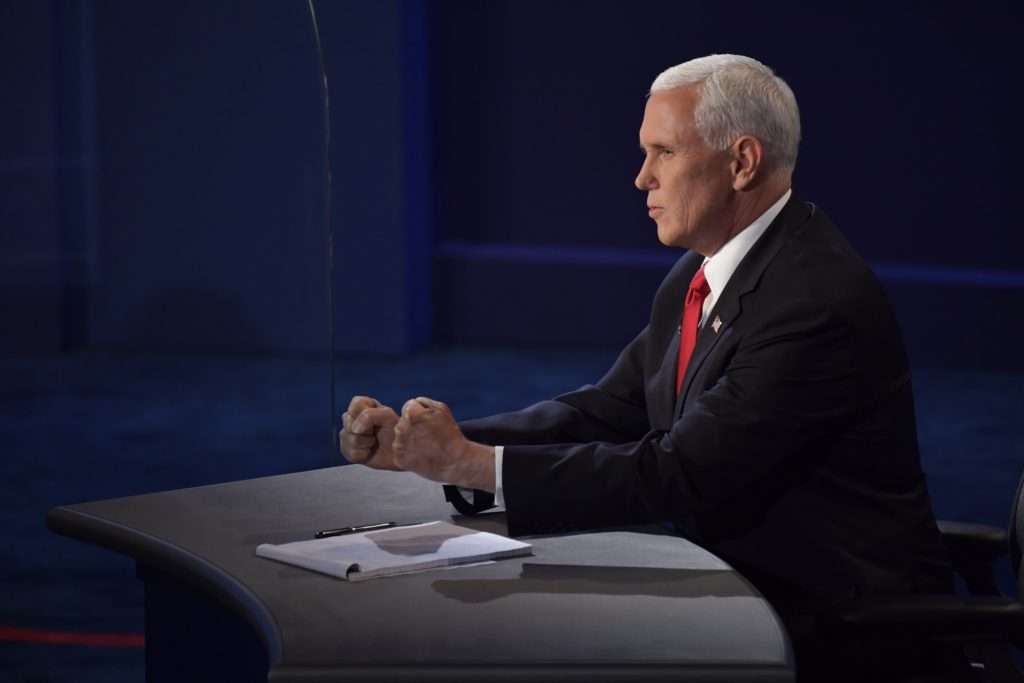 Pence himself tried to ding Harris on criminal justice reform, bringing up her walking out on a vote on a GOP-backed bill and saying: "When you were DA in San Francisco, when you left office, African-Americans were 19 times more likely to be prosecuted for minor drug offenses than whites and Hispanics. When you were attorney general of California, you increased the disproportionate incarceration of blacks in California."

But Pence just spent his previous answer denying that systemic racism exists, and he is part of an administration that's been horrible on crime in its own ways. Federal law enforcement just spent the summer snatching protesters off the streets and generally making an authoritarian spectacle of itself. Pence is in no place to be pointing fingers about inhumane or overly punitive responses.

You can watch the debate here. A transcript is here. The New York Times has a play-by-play here. And here's more VP debate coverage from Reason:

In a decade-old case now before the U.S. Supreme Court, the tech company Oracle is suing Google for alleged copyright infringement. Oracle claims "that Google infringed on copyrights related to using roughly 11,000 lines of code from the Java programming platform to develop Android," explains The Washington Post.

Oracle, which acquired Java in 2010 when it bought Sun Microsystems, has sought $9 billion in damages, arguing that Google used the code without its permission.

Google argued that weaving that code into Android was protected under the "fair use" doctrine….The case, which has broad ramifications for the software industry, has bounced around various courts over the years. In 2016, jurors ruled Google's use of the Java code was permitted as fair use under federal copyright law. Two years later, a federal appeals court overturned that, ruling that there is "nothing fair about taking a copyrighted work verbatim and using it for the same purpose and function as the original in a competing platform."

"Four weeks before Election Day, third-party presidential candidates continue to lag in the polls compared to the spike year of 2016, when 5.7 percent of the electorate went nontraditional for POTUS," notes Reason's Matt Welch.

But while "Libertarian Jo Jorgensen sits at just 2 percent, while the Green Party's Howie Hawkins is at a temporarily high 1.4 percent that will revert closer to 1 once the next poll rolls over," they could still "be labeled 'spoilers' depending on how this high-intensity election plays out," Welch writes.

"The true size of government is nearing a record high" https://t.co/DO6VT3RvPa pic.twitter.com/ynqKMBuV1j

• "Poisons, plots and psychic powers—why is the president's health such fertile ground for the paranoid imagination?" Reason's Jesse Walker explores the long history of presidential assassination theories at The New York Times.

• The Trump administration's COVID-19 outbreak has infected "34 White House staffers and other contacts," according to a government memo obtained by ABC News.

• Derek Chauvin, the former Minneapolis cop who kneeled on George Floyd's neck and has been charged with his murder, was released from jail yesterday on $1 million bail.

• A good reminder that the crusade against the tech industry is partly rooted in traditional media companies resenting its effect on their profits.

• A new study finds "that maternal age at last birth is positively associated with telomere length, meaning that women who delivered their last child later in life were likely to have longer telomeres, a biomarker of long-term health and longevity."