"I'm going to have a choice the first week in August," said Biden. Speculation about who Democratic presidential candidate Joe Biden will pick as his running mate is getting out of control as the announcement becomes more imminent. Biden said months ago that it would definitely be a woman and, while a multitude of names have been thrown around in the press as potential contenders, many are betting on California Sen. Kamala Harris—though her attempt to portray Biden as a racist on the debate stage last summer may still complicate things.

About the dust-up, Harris "laughed and said, 'that's politics.' She had no remorse," former Sen. Chris Dodd (and a member of Biden's vice presidential search team) told Politico.

This and similar complaints have prompted accusations of sexism from some prominent progressive women. "When your pals help you pick your lady VP based on how contrite she is about having challenged you in a debate," tweeted New York magazine writer Rebecca Traister.

But let's not gloss over what Harris actually did to Biden. It may well be just politics, but it was certainly not Harris simply disagreeing with or challenging Biden during a debate.

Harris framed Biden's former opposition to federal busing mandates to racially integrate schools to make him appear racist and out-of-touch—and then was ready with merchandise to sell around these digs. After a lot of media attention and donations garnered by her attack on Biden, Harris "clarified" that she also opposed a federal busing mandate. It was a backhanded and hypocritical fundraising ploy at Biden's expense.

Still, Biden and Harris have been awfully chummy lately.

Now, a media mistake and Biden's notes are fueling even more speculation that Harris will be the one.

First, Politico briefly published text—dated August 1—that declared Harris to be the vice presidential pick, prompting some to wonder if the publication had a scoop it had mistakenly offered up too soon. (Clicking the former page URL now will lead you to an error page.)

It's common for news outlets to pre-write items like this around a number of possible outcomes, and that may be all that's going on here. Politico could have similar slugs for others at the ready, too. However, it's not common for journalists writing slug articles like this to fabricate direct quotes (usually you just use placeholder text, like "TKTKTK," where you want a future quote to go), as the Politico text that went up yesterday does.

It states that "in his announcement, Biden called Harris 'a worthy opponent and a worthy running mate.'" 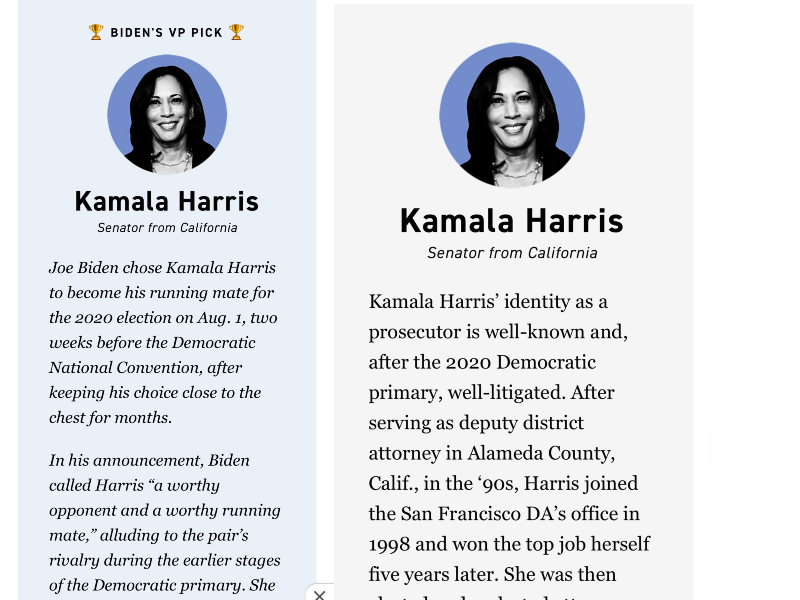 So, what's going on there is anyone's guess. On Monday, Politico told readers not to "count Susan Rice out of the vice presidential contest" and ran a piece skeptical of Harris' chances to be Biden's running mate.

But this list could easily be things that Biden would say about Harris if she's not his pick but he still wants to convey that there's no bad blood.

(Personally, I'm just amused—or maybe saddened—that such basic comments even needed to be written down, as if Biden couldn't come up with positive things to say about Harris unscripted…)

"Biden ultimately did not field a question specifically about Harris," the A.P. reports. And "Biden also sidestepped specific questions about the timing of his decision on a running mate, an approach reflected in another entry on Biden's notepad. Under the heading 'VP,' Biden wrote 'highly qualified' and 'diverse group,' signifying his intention not to tease out any more details."

Biden did, however, tell reporters that he would "have a choice the first week in August, and I promise I'll let you know when I do."

Aside from Harris and Rice, those reportedly in the contest include Massachusetts Sen. Elizabeth Warren and California Rep. Karen Bass.

Already, Biden's rumored Harris selection has a lot of people—including Warren fans—angry or questioning the wisdom of his choice. Harris' prosecutor past is a liability especially during a period of such scrutiny toward police and our criminal justice system. Selecting Harris will also remind Americans of her attacks on him, with their potential to make both Harris and Biden look bad.

Many have focused on the fact that Harris is a woman of color as a reason Biden should pick her over Warren. And there's certainly another overlooked perk: dirt on Trump-related activities.

If Kamala Harris is Biden's VP pick, she brings an advantage the other candidates couldn't-She knows what's behind every redaction in the upcoming 1000 page Senate Intel Committee Counterintelligence Report on Trump/Russia. It will be a formidable advantage against any R opponent

Democratic Party leadership is out of touch on marijuana. "On Monday the Democratic National Committee rejected an amendment to put a plank supporting marijuana legalization into the party's platform," notes Reason's Scott Shackford. "The final vote against, 50-106, is almost a perfect inversion of the two-thirds of the public who want legalization."

The Trump administration is taking "steps to wind down legal protections for hundreds of thousands of immigrants brought into the country as children, often called 'Dreamers,'" NBC News reports. The White House said yesterday it will "reject initial requests and application fees for new filings, consider all applications for renewal on a case-by-case basis but limit renewals to one year rather than two, and reject all applications for advance parole unless there are 'extraordinary circumstances'" as it undertakes a legal review of its plans to end the Deferred Action for Childhood Arrivals (DACA) program.

The "ruling is a victory for DACA recipients, but a very limited one," wrote Eugene Volokh at the time. His take:

The Supreme Court correctly concluded that the Trump administration's shoddy rationale for rescinding DACA violated the Administrative Procedure Act because it failed to offer any justification for repealing the central element of the DACA program: forbearance on deportation of undocumented immigrants who were brought to the United States as children. But Trump or a future president could still rescind DACA if they are willing to offer such a justification in the future and pay the political price of doing so. For that reason, I strongly agree with co-blogger Jonathan Adler's view that this is a very narrow decision.

Today's ruling does not definitively end either the legal or the political battle over DACA. Ultimately, only Congress can do that, by finally passing a law definitively protecting "Dreamers" from deportation and giving them permanent resident status in the United States. Until then, they will not be fully safe.

• The feds are conditioning protesters' release from jail on them not attending any more protests.

• "A National Guard officer will testify Tuesday at a congressional hearing that the June 1 clearing of protesters outside the White House was 'an unnecessary escalation of the use of force,'" writes Reason's C.J. Ciaramella.

• "Universal Pictures and AMC Entertainment, the No. 1 movie chain in the world, have reached a deal to allow movies to move to homes after a mere three weeks in theaters in the United States, almost certainly changing the way that Hollywood does business," reports The New York Times.