It's 2020 and the leadership of the Democratic Party still cannot get it together on marijuana legalization, which two-thirds of Americans support. 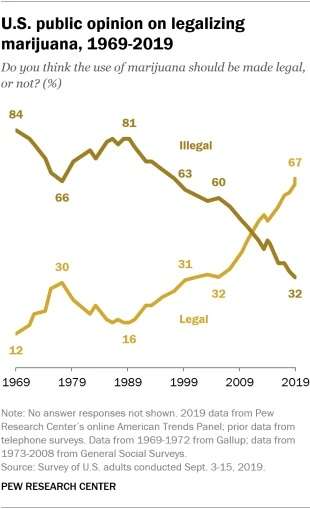 According to Pew polling data, support for full legalization crossed the 50 percent threshold back in 2010 and has been growing ever since. Much like support for gay marriage recognition, this seems to be a permanent cultural shift in attitudes.

But unlike the Democratic Party's embrace of gay marriage, its leadership cannot seem to line up behind marijuana legalization, even as the Black Lives Matter and criminal justice reform movements highlight precisely how the drug war has led to the overpolicing and harassment of black communities.

Marijuana Moment reports that on Monday the Democratic National Committee rejected an amendment to put a plank supporting marijuana legalization into the party's platform. The final vote against, 50-106, is almost a perfect inversion of the two-thirds of the public who want legalization.

Instead, Marijuana Moment reports, the platform will retain language that Democratic nominee and former Vice President Joe Biden hammered out with a criminal justice task force that included Sen. Bernie Sanders' (I–Vt.) supporters. It stops short of marijuana legalization but does call for federal reforms:

"Democrats will decriminalize marijuana use and reschedule it through executive action on the federal level. We will support legalization of medical marijuana, and believe states should be able to make their own decisions about recreational use. The Justice Department should not launch federal prosecutions of conduct that is legal at the state level. All past criminal convictions for cannabis use should be automatically expunged."

It's nice that the Democrats say that the Justice Department "should not launch federal prosecutions," but that's fundamentally meaningless as a policy proposal. Remember all the screaming that President Donald Trump has too much influence over a Justice Department some believe should be operating independently? Shifting marijuana so that it's in a less restrictive schedule in the Controlled Substances Act will still give the Justice Department plenty of reasons to go after marijuana users and dealers should they choose to.

And while the Justice Department isn't a huge driver of marijuana arrests and prosecutions these days, it does still happen, particularly when people are caught trying to transport marijuana across state lines from states where it has been legalized to states where it has not been. Just in June, for example, the Drug Enforcement Administration filed federal charges against an attorney they caught allegedly conspiring to fly cannabis oil across the country from California in a private Learjet for sale elsewhere. The man now faces a mandatory minimum sentence of five years in prison if convicted.

On the state and local level, marijuana offenses still account for 40 percent of drug-related arrests. And the vast majority of those arrests (more than 90 percent) are for possession, not manufacture or sale.

These aren't small numbers, but Biden, after all these years, is still resistant to full marijuana legalization. He brags about being a leader in publicly embracing gay marriage, reversing his old position against it and embracing it in 2012—even before President Barack Obama would publicly do so.

But with marijuana, Biden's historical support of harsh criminal justice tactics has weakened but not faded. And it appears that the Democratic leadership is unwilling to force Biden to accept the reality that Americans would strongly prefer marijuana to be fully legalized, not just decriminalized. While decriminalization is an improvement, it leaves in place mechanisms for unequal enforcement, and research shows that black people are more likely to still be arrested or punished for marijuana possession than white people in states where marijuana has only been decriminalized. And overall, according to the American Civil Liberties Union, marijuana arrest rates in states where the drug has been decriminalized are about eight times higher than in states where it has been fully legalized.

The federalist component of the platform is laudable from a libertarian perspective, if for no reason other than continued state-level legalization shows that the world isn't ending in states that have given the citizenry permission to toke up. Their successes should make other states less afraid to follow suit. It's not unlike how state-level recognition of gay marriage showed that it was ultimately not a big deal and as the public saw more of these relationships and families, resistance largely crumbled away.

Nevertheless, it's absurd for the Democratic Party to want to use the current activism for criminal justice and police reform as a contrast to Trump's cheerleading for crackdowns, but they can't even force Biden to accept the simplest and most popular of drug war reforms that will—in very profound and important ways—reduce overpolicing of black communities.