Mark Zuckerberg's evolution from hoodie-wearing tech nerd to Bond-level supervillain has been nothing short of amazing. Ever since Hillary Clinton lost the 2016 election—an outcome her partisans routinely dump squarely at Facebook's feet—Zuck and the world's largest social-media platform have become the force that can't do anything right. We're told that they give away our private data (that we mostly agreed to give away or don't really care about much), they bombard us with so much hate speech and body shaming that young girls are killing themselves in record numbers, they destroy journalism by goading stupid companies to "pivot to video" that nobody watched, they limit the reach of the Trump-loving duo Diamond & Silk, they let Russian trolls dictate the course of even municipal elections, and on and on.

The latest salvo against Zuckerberg and the monster he has created comes from a co-founder of the company, Chris Hughes, last seen driving The New Republic's long-flagging reputation as anything other than a breeding ground for fabulists deeper into the ground. Writing in The New York Times, Hughes (who says he sold off his Facebook shares years ago) claims that his former roommate is the most powerful person on the planet, with

influence…far beyond that of anyone else in the private sector or in government….Mark's power is unprecedented and un-American.

Zuckerberg, writes Hughes, bestrides the modern world like a Colossus. He owns 60 percent of voting shares, and he

alone can decide how to configure Facebook's algorithms to determine what people see in their News Feeds, what privacy settings they can use and even which messages get delivered. He sets the rules for how to distinguish violent and incendiary speech from the merely offensive, and he can choose to shut down a competitor by acquiring, blocking or copying it.

This is hyperbole at its most hyperbolic—and timely. Everyone hates Facebook these days, for one reason or another. (I'm pissed at its recent decision to ban such idiots as Louis Farrahkhan and Alex Jones of Infowars.) Conservative Republicans and liberal/progressive Democrats openly talk about breaking it up into smaller companies or regulating it as a public utility or broadcast network. Hughes' testimony will only add fuel to that fire. 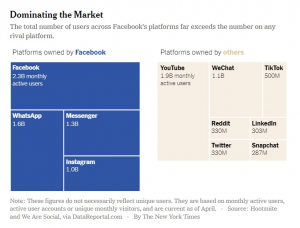 But should the government clamp down on Facebook? Not if Hughes' case is the best its critics can muster. Citing Columbia Law professor Tim Wu and Sen. Elizabeth Warren (D–Mass.), Hughes argues that Facebook's bigness is inherently dangerous (an argument frequently made by the ideological descendants of Louis Brandeis, who railed against the "curse of bigness" without necessarily ever showing harm to customers). "About 70 percent of American adults use social media," writes Hughes, "and a vast majority are on Facebook products."

Well, so what, exactly? As is often the case with the new trustbusters, claims of ironclad "monopoly" fade into mere frustration that a particular company they find offensive commands a large share of a given market (in this case, social media). Competitors, Hughes says, are either bought up and assimilated into Zuckerberg's empire (this happened to Instagram and WhatsApp) or vanquished by getting ripped off and imitated. (Hughes claims this happened to both Snapchat and Vine, but those comparisons are not particularly illuminating. Snapchat is still a going concern, and Vine was shut down by Twitter for reasons that range far beyond losing its user base to Instagram.) There is still a vibrant and growing market for all sorts of new social media apps and platforms, but it's essential to critics that Zuckerberg appear like Thanos, capable of destroying entire universes with the snap of a finger.

Hughes simultaneously faults Zuckerberg/Facebook for moderating content too much and not moderating it enough, for letting hate speech spill through various filters and for choking off news feeds that go in unwanted directions. Worse still, Hughes finds himself still using Facebook and Instagram despite his insider knowledge that they are akin to pure evil:

Some days, lying on the floor next to my 1-year-old son as he plays with his dinosaurs, I catch myself scrolling through Instagram, waiting to see if the next image will be more beautiful than the last. What am I doing? I know it's not good for me, or for my son, and yet I do it anyway.

The choice is mine, but it doesn't feel like a choice. Facebook seeps into every corner of our lives to capture as much of our attention and data as possible and, without any alternative, we make the trade.

For Hughes, "just breaking up Facebook is not enough." Hughes proposes "a new agency, empowered by Congress to regulate tech companies," that would protect "privacy," ensure "basic interoperability" across platforms, and—wait for it—"create guidelines for acceptable speech on social media." Ironically, this proposal puts him on the same side of the argument as Zuckerberg and other tech titans such as Apple's Tim Cook, Twitter's Jack Dorsey, and Google's Sundar Pichai. They have all explicitly called for regulation of themselves and have even, bless their pointed little heads, offered to help write the regulations. Of course they have, because like the railroad barons before them, they know that whatever fat market shares and profits they have now are likely to thin out over time. This is all basic public-choice economics, playing out in real time.

After acknowledging that having the government decide what speech is legal is deeply troubling, Hughes writes, "There is no constitutional right to harass others or live-stream violence," as if these categories are any more self-evident than "hate speech." Some forms of harassment are already illegal—the First Amendment does not protect "true threats"—but what exactly would count as harassment under Hughes' proposal? Go ask the perpetually aggrieved students at University of the Arts or Seton Hall and get back to me. Facebook acted quickly to take down the livestream of the Christchurch, New Zealand, shooting and was criticized both for taking too long and for censoring the content, which has obvious news value.

Every platform will make these decisions differently, and the last thing anyone should want is the government making that call for all of us. (Sharing video of the shooting and the gunman's manifesto have been prohibited in New Zealand and at least six people are going to trial on such charges.) I personally think Facebook and other platforms have made a major mistake by taking on the Sisyphean task of moderating content beyond very basic decisions limited to obviously criminal speech. But that is Facebook's mistake to make. The only thing worse than Zuckerberg in his spider hole making those decisions is granting any government that authority.

Hughes' argument to break up Facebook rests on this fundamentally false analysis:

Because Facebook so dominates social networking, it faces no market-based accountability. This means that every time Facebook messes up, we repeat an exhausting pattern: first outrage, then disappointment and, finally, resignation.

In fact, as the political scientist John Mueller underscored in his 1999 work Capitalism, Socialism, and Ralph's Pretty Good Grocery, even actual monopolists have to court the buying public. (The only exceptions are government-enforced monopolies.) Doing so makes it "more likely to be able to slide price boosts past a wary public—that is, such moves are less likely to inspire angered customers to use less of the product and/or to engender embittered protest to governmental agencies." And in fact, Facebook's flailing attempts to address criticism over the past year demonstrate not a company that is secure in its position but one desperately seeking to maintain it, even via regulation.

The idea that the government will do a better job at fixing what's "wrong" is risible, especially when the option of individual users simply walking away remains a viable option. In the United States, the number of Facebook users seems to be declining (hence the company's call for regulation). Many leavers do seem to be going to Facebook's sister site, Instagram, where the experience is markedly different and which still proves the basic point that Facebook doesn't have an iron grip on an audience. Roam around cyberspace a bit and you'll see the vast, empty ruins of once-unstoppable empires known as MySpace, AOL, Yahoo…

Hughes speaks of a pattern of outrage, disappointment, and resignation when it comes to Facebook's responses to public and political outcry. Let me suggest another feedback triptych. Not long ago, I interviewed Arthur Brooks, the outgoing president of the American Enterprise Institute and author of the recent book Love Your Enemies. He notes that with new technologies, including social media, society tends to go through three emotional stages. First is the utopian stage, when we're all jazzed up about the possibilities of a new innovation that promises to greatly improve some aspect of our lives. Next comes the dystopian phase, when we attribute all our ills to the new thing—TV, or the Web, or social media. Finally comes the moment when we put the technology in its proper place and begin to use it appropriately in our lives, assuming the thing is worth keeping around. When it comes to social media, which has a mass thing for only a little more than a decade, we're clearly in the second phase and almost certainly heading into the third, as we all tire a bit of these sites' demands on our attention. Facebook, like so many other things before it, has indeed changed our world, but in profound ways it has also disappointed us.

Our relationship to it—whatever it becomes—will almost certainly always be ambivalent, just as relationships to cell phones, TV, and cars are. But that basic reality is obscured when we cast Mark Zuckerberg as the most powerful man on the planet and his company a Death Star that threatens our future.