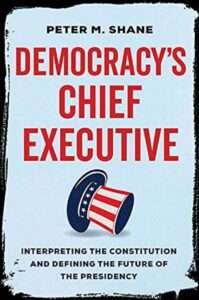 The Yale Journal on Regulation is hosting a symposium on Peter Shane's important new book, Democracy's Chief Executive: Interpreting the Constitution and Defining the Future of the Presidency. They have already posted contributions by VC co-blogger Keith Whittington (Princeton), Daniel Farber (UC Berkeley), Cristina Rodriguez (Yale), Gillian Metzger (Columbia), and several others, including myself.

Here's an excerpt from my contribution:

Peter Shane's Democracy's Chief Executive is a formidable challenge to much conventional wisdom about presidential power – particularly, but not exclusively, on the right. At the very least, it casts serious doubt on traditional originalist arguments in favor of an executive that is both "unitary" and endowed with broad substantive authority across a wide range of issue areas. He also explains how presidential power in many domains has exceeded constitutional bounds, and grown to dangerous levels…..

In this assessment, I advance two points, one an extension of his thesis, the other a critique. The former focuses on presidential efforts to usurp Congress' power of the purse, an issue largely ignored in Shane's book. The latter focuses on the tension between Shane's support of relatively tight limits on presidential power and his largely uncritical endorsement of broad views of the total scope of federal authority under the Constitution, particularly under the Commerce Clause. The same point applies to his rejection of constraints on Congress' power to delegate regulatory authority to the executive….

While Shane notes several other ways in which the Trump Administration pushed beyond previous limits on executive power, he overlooks its usurpation of the spending power. Using a variety of executive orders, lawsuits, and Justice Department policies, the administration repeatedly sought to impose conditions on federal grants to state governments that were not authorized by Congress….

Trump also famously tried to use a national emergency declaration to divert military funds to the construction of his border wall, despite Congress' repeated refusal to fund this project….

President Biden has used Trump-like exploitation of emergency powers to forgive hundreds of billions of dollars in student loan debt – an action with many parallels to Trump's border wall diversion, including the highly strained nature of administration claims that the policy has statutory authorization….

Executive usurpation of the spending power….. would give the president a powerful stick with which to reward allies and punish political adversaries, and bend recalcitrant state governments and private interest groups to his will…..

While the spending power issue can readily fit within Shane's thesis that presidency needs to be curbed, his embrace of extremely broad theories of federal power undercuts it…..

If the federal government can legislate on virtually anything that might be considered a "national problem" in some sense, we end up with the status quo, in which it can ban the distribution or possession of almost anything…. With such extensive regulation of almost every human activity, it is inevitable that much authority will be delegated to the executive, thus giving the president vast power….

This, in turn, undercuts the democratic accountability and deliberation Shane advocates. As he recognizes, most voters pay little attention to government and public policy, and often do not even know such basic things as the names of the three branches of government.  Most are "rationally ignorant" about politics; due to the very low likelihood that any one vote will change an electoral outcome, few voters devote more than minimal time and effort to learning about public policy.

The larger and more complex the federal government, the more likely that most of its functions -including those performed by the executive – will escape meaningful democratic accountability. Indeed, most of the electorate won't even know about most of them. And the more the president will wield dangerously unaccountable power.

There will be some additional contributions to the symposium over the next few days, and Prof. Shane will post a response to the participants.