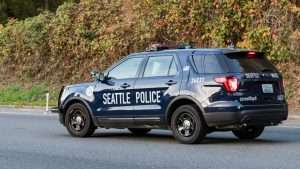 Yesterday, the White House issued a memorandum on cutting federal grants to "anarchist jurisdictions," by which they seem to mean local governments that don't pursue the sorts of aggressive law enforcement policies the administration favors. In and of itself, the memorandum is long on rhetoric condemning supposed "anarchy," but short on actual action.

It could be that the document is mostly a PR move intended to stoke Trump's base, and bolster the "law and order" theme of his presidential campaign. If the administration does end up actually trying to condition federal grants on adherence to the policies outlined in the memorandum, it would be yet another attack on federalism and separation of powers, similar to that resulting from Trump's attempts to deny federal grants to "sanctuary cities" unless the latter began assisting federal deportation policies.

Unlike the executive order and Justice Department policies targeting sanctuary jurisdictions, the new memorandum on "anarchist" jurisdictions doesn't actually order any denial of federal funds or impose any new conditions on grant recipients. Rather, it merely instructs the Director of the Office Management and Budget (OMB) to, within 14 days, "issue guidance to the heads of executive departments and agencies (agencies) for each agency to submit a report to the Director of OMB detailing all Federal funds provided to Seattle, Portland, New York City, Washington, D.C., or any components or instrumentalities of the foregoing jurisdictions." In addition, "[w]ithin 14 days of the date of this memorandum, and updated as appropriate but no less than every 6 months thereafter, the Attorney General, in consultation with the Secretary of Homeland Security and the Director of OMB, shall publish on the Department of Justice website a list identifying State and local jurisdictions that have permitted violence and the destruction of property to persist and have refused to undertake reasonable measures to counteract these criminal activities (anarchist jurisdictions)."

Among the policies used to identify supposed "anarchist jurisdictions" are factors such as "whether a jurisdiction disempowers or defunds police departments," whether it "unreasonably refuses to accept offers of law enforcement assistance from the Federal Government," and whether it bars "the police force from intervening to restore order amid widespread or sustained violence or destruction."

Significantly, however, the memorandum doesn't actually identify any particular federal grants that are to be cut or denied until such time as the jurisdiction in question ends law enforcement policies the White House disapproves of. The only actual mandate the memorandum imposes is a requirement that OMB and the Justice Department require a "review" of federal grants to several cities, and create a list of "anarchist" jurisdictions based on the vague criteria described above. It is far from clear what, if any, federal grants the administration would deny the offending "anarchists."

If the administration ultimately does identify specific federal grants that it wants to cut unless the targeted jurisdictions adopt law-enforcement policies that are more to the White House's liking, it could end up raising the same sorts of federalism and separation of powers issues as the administration's campaign against sanctuary cities. In that field, the administration has suffered a long series of defeats in court because the conditions the administration sought to impose on federal grants either were never authorized by Congress (which controls the power of the purse), infringed on state and local autonomy under the Constitution, or both. The same thing could easily happen here if the administration once again tries to make up its own spending conditions in order to force states and localities to do its bidding. Trump has attempted to do the same thing on a variety of other issues, including trying to use the threat of funding cutoffs to prevent states from expanding vote-by-mail opportunities in the upcoming presidential election.

If the administration succeeds in these efforts, it would set a dangerous precedent enabling the president to circumvent congressional control over federal spending, and bully states and localities into submission on a wide range of issues, that go far beyond immigration, law enforcement, or voting. Conservatives who may cheer Trump's attacks on "anarchist jurisdictions" and sanctuary cities may not be so happy if Joe Biden or some other future Democratic president uses the same sweeping powers to force state and local government to adopt left-wing policies on gun control, education, environmental regulation, and much else.

Conservatives and others who value local and state autonomy should be wary of federal efforts to impose uniform policies on such quintessentially local issues as combating street crime. If even that must be brought under the control of the White House, it is not clear what, if anything, would be left to the states.

More generally, both right and left have reason to fear the kind of increasing concentration of power in the White House that would occur if the president had a free hand to control the federal budget and use it to pressure states and localities on a wide range of policies. That would both threaten valuable diversity in state and local policy, and undermine one of the best ways to mitigate the dangerous political polarization between "red" and "blue" states.

Condemning the administration's approach here does not require us to approve of all the law-enforcement policies adopted by liberal Democratic localities, some of which have indeed been overly tolerant of violence and rioting. As I have emphasized in the past, we should be able to take strong action to curtail police abuse and racial profiling, while simultaneously also rejecting rioting, looting, and private violence. The latter are both intrinsically evil and likely to undermine the cause of ending racial discrimination and other unjust law enforcement practices. I'm also skeptical of indiscriminate "defunding" of police, even though there are beneficial ways to cut funding and limit police activity in a more targeted fashion.

But the sins of some liberal local governments do not justify White House efforts to undermine federalism and separation of powers. Nor do they justify abuses by federal law enforcement agencies, such as those we recently saw in Portland. It would be better if the White House stuck to actual responsibilities of the federal government, and left local law enforcement alone, except in cases where the latter violates constitutional rights or properly enacted federal law.