Reason is supported by:
Watching My Money Inflate Away

On Wednesday, Twitter rolled out its new Twitter Blue program, under which anyone can pay $8 per month to get a blue checkmark emoji next to their name. Blue checkmarks on Twitter previously signified that an account holder's identity had been verified—and this is still how the blue check is used on other social media platforms, such as Instagram. But under Elon Musk's leadership, Twitter is rolling out a weird and confusing new system under which the blue check sometimes means someone's identity has been verified and sometimes doesn't.

Predictably, this has already led to a lot of imposter accounts.

For instance, someone pretending to be the verified account for Nintendo shared an image of Mario giving the finger:

I love this in my soul 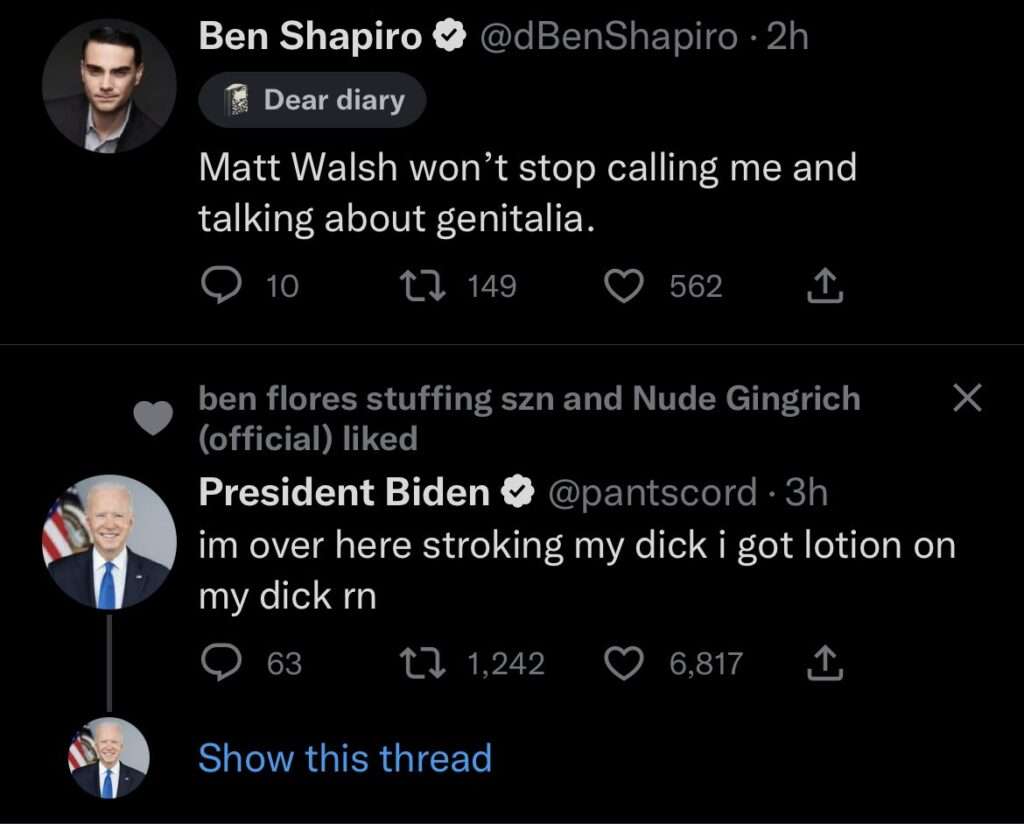 Most of these so far have been obvious parodies. In addition to the content of their tweets being implausible for the person they're imitating, the impersonating accounts still have handles that give them away. (You'll note that the handle for the fake Nintendo account, for instance, is @nintendoofus.)

But some—like the fake Trump account—are tweeting more realistically. Handles appear much smaller than account names and the blue checks, making the ruse difficult to distinguish for folks scrolling quickly. Scammers who pick more plausible account handles will be even harder for your average Twitter user to suss out.

At least impersonations of brand accounts, prominent politicians, and celebrities are detectable with a little work. Many large firms are already on Twitter, market themselves to a broad audience in an inoffensive way, and have many followers. And when impersonators do pose as famous people, the actual accounts can easily call them out publicly, while countless others will do the same on their behalf. They should also have no problem getting Twitter to acknowledge the problem and suspend the offending accounts.

It's not impersonations of high-profile accounts that are the problem. It's the person impersonating a minor online celebrity, an obscure government functionary, or perhaps their ex. That's where the harm will be done and no one will notice or care until it's far too late

The issues will be much harder to deal with for people who are "public figures" but not A-list famous—activists, academics, journalists, scientists, doctors, etc.—and especially for people who are not public figures but are still plagued by impersonators. Your average person will have a much harder time proving to the Twitter powers that be that they are the real account, especially if their account is relatively new or rarely used (in fact, some savvy impersonators may preemptively report the people they're impersonating as the imposters). And this will likely be even more difficult for folks who don't have a Twitter account and find an impersonator starting one.

In short, the new system makes it easier for malicious actors to do serious reputational damage to their targets and for folks to create entirely fake identities to spread false information or stir up drama.

The potential for abuse would be smaller if Twitter said, Look, blue checkmarks once meant "identity verified," and now they don't.

This was the company's earlier plan—it announced earlier this week that blue checks would now mean you paid for an account, while prominent verified accounts would get a badge saying "official." But after rolling out the official badge on some accounts, Twitter backtracked, took it away, and announced that blue checks would mean either official or paid. As of now, the only way to tell the difference is to click through to an account's profile and click on the checkmark. 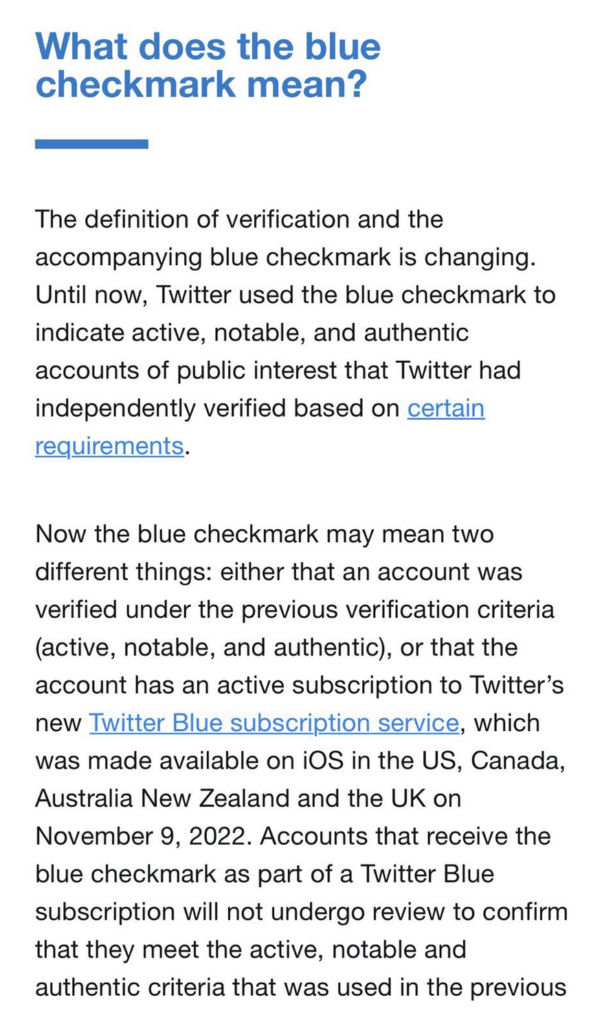 Twitter could have created a different color check mark to signify paid accounts. Or it could have changed the verified account color to differentiate. Either move would have made more sense from a usability standpoint. But neither of those plans would have allowed Musk to brag that he was democratizing the blue check—which has taken on a weird symbolic meaning far beyond its actual utility—and might be less enticing to people who see a blue check (not a green or a gray or a pink one!) as a status symbol.

What should be obvious to Musk is that the blue check's symbolic value was derived from its scarcity. Granting a checkmark to anyone who pays diminishes the perceived prestige while ruining the useful identity verification function.

It's one of many recent decisions that make it seem Musk has no idea what he's doing.

The result: an exodus of Twitter advertisers and plummeting stock for Musk's other company, Tesla.

Tesla's stock price how now fallen 46% since Elon Musk's bid to buy Twitter became public on April 14. This has reduced Tesla's market value by almost half a trillion dollars. (For comparison, the S&P's fallen about 15% during the same time.) pic.twitter.com/GgtMVCFxF5

Libertarian "spoiler" allegations strike again. Several midterm House and Senate races are still uncertain. Chief among these is the Senate race between Herschel Walker (R) and Raphael Warnock (D) in Georgia, which will go to a runoff election. Partisans on both sides blame Libertarian Party candidate Chase Oliver, who got just over 2 percent of the vote, for depriving Walker and Warnock of a conclusive victory. As in every election, this criticism assumes that Libertarian Party voters, absent a Libertarian Party candidate, would have given their votes to one of the two major parties. But, as Oliver told Reason, "you can't spoil what's already rotten."

"Many Libertarian voters would have simply stayed home without a Libertarian in the race — it's not true that our votes automatically would go to one of major party candidates." ? ⁦@robbysoave⁩ claps back at people angry at ⁦@ChaseForLiberty https://t.co/KteoOxZ1UH

Inflation stayed high in October. From The Washington Post:

Data to be released Thursday morning by the Bureau of Labor Statistics is expected to show prices rose roughly 8 percent in October compared with the year before. Regardless of the specific figure, the latest report will tell an all-too-familiar story for Americans nationwide: Inflation is the biggest threat to the economy and continues to burrow into nearly ever part of life.

One thing we totally neglected in yesterday's Roundup: how much Jared Polis dominated in Colorado. (See also: Jared Polis—the Most Libertarian Governor in America?)

So, uh, when do we start talking about how Jared Polis just did to Colorado what DeSantis did to Florida? Dominated a once purple state by nearly 20 points and pulled the entire party up with him. https://t.co/fBDxCT3oqb

After the GOP drastically under-performed projections, some Republicans are doing some soul-searching. Others are… not:

When you're DEFINITELY ready to accept the lessons of the 2022 election. pic.twitter.com/DMtsTgO6Qs

The guy who ran billboards all over LA showing how bloated our police budget is won a BLOWOUT victory over the establishment guy who wanted to increase police funding pic.twitter.com/gjZmi8NBWl

• More than 100,000 Russian troops have been killed or injured in the war in Ukraine, according to the chairman of the Joint Chiefs of Staff, Gen. Mark A. Milley.

• School discipline run amok: A 10-year-old faces criminal charges after a school counselor says he touched her inappropriately during a hug and reported it to the police.

A president shouldn't suggest that @elonmusk or any American citizen should be "looked at" outside the formal legal process and without a specific allegation of wrongdoing. https://t.co/TTfvuRFgmv