After a one-month break, inflation took off again in August as prices rose by 0.1 percent overall despite falling gas prices.

Prices have climbed by 8.3 percent over the past 12 months, according to the consumer price index (CPI) data released Tuesday morning by the Department of Labor. That's down from the 8.5 percent mark in July, but the uptick in August's monthly figure seemingly puts an end to hopes that prices were finally cooling after a year of increases, the likes of which hadn't been seen since the 1970s.

But, wait, how can inflation be rising and yet be down from the tallies announced in both June and July? That's because the annualized rate—the 8.3 percent number—is the sum of the past 12 monthly figures. Prices rose by 0.1 percent in August, but this month's annualized rate drops from last August's monthly rate of 0.3 percent. So the annual figure declined even though inflation rose last month.

The specifics of Tuesday's report are more important—and possibly even worse—than the topline figure. So-called "core CPI," which filters out the more volatile categories like food and fuel prices, rose by 0.6 percent in August. In short, falling gasoline prices helped to offset broader and more pernicious inflation across the rest of the economy. 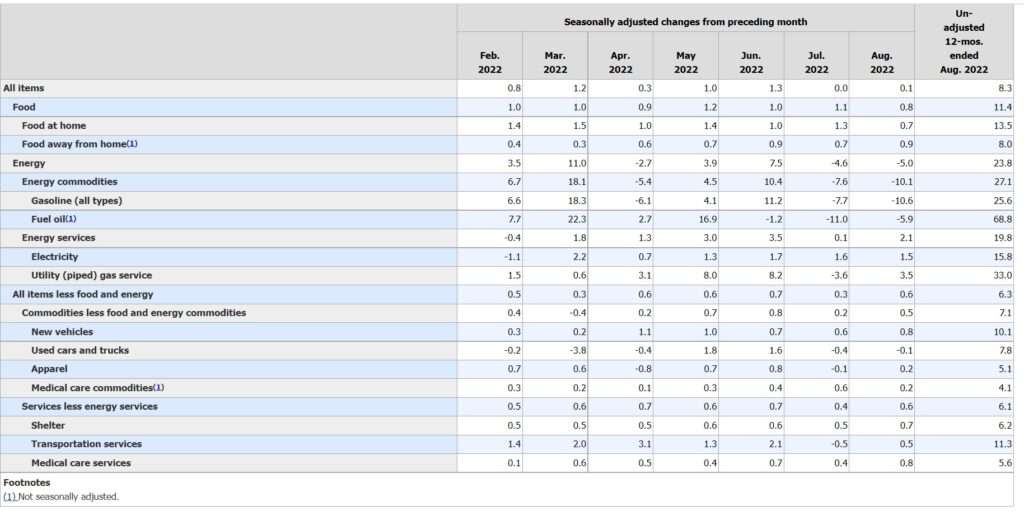 This is in some ways the reverse of the situation the country faced earlier this year. In March and April, for example, high and quickly rising gas prices were driving overall inflation. Now, gas prices are declining, but inflationary pressure has moved along to other areas of the economy—areas where it is likely to be harder to extinguish.

After a month where it was low, core inflation comes in hotter than expected.

But what stands out to me is that it's right in line with the average value from October 2021 through June 2022 - core has been, sadly, consistent as it shifted from goods to services. pic.twitter.com/nWEeVKhfmJ

"This is a much much worse CPI report than anyone was expecting," wrote University of Michigan economist Justin Wolfers on Twitter. "Basically last month's optimism has been countered by this month's pessimism."

While falling prices at the gas pump will be a positive for consumers, Wolfers noted, persistently rising food prices are a major issue. Groceries—which fall under the "food at home" category in the CPI report—are up by a whopping 13.5 percent in the past year, significantly higher than overall inflation.

Falling gas prices, resolving supply chain snafus, and higher interest rates will continue to put downward pressure on inflation. Unfortunately, politicians are still throwing bundles of cash out the metaphorical windows—and, as always, the recipe for inflation is more money chasing the same pile of goods and services.

Much of the $1.9 trillion American Rescue Plan stimulus package hasn't been spent yet and will continue to drive inflation. Meanwhile, economists warned unsuccessfully that President Joe Biden's scheme to forgive up to $20,000 in student loans for some borrowers would trigger more inflation—that's not responsible for August's uptick in inflation, of course, so we've still got that to look forward to.

Americans continue to tell pollsters that inflation is their top concern, and with good reason. Tuesday's report will only add to those worries. Unfortunately, this is a serious conundrum for our current crop of federal elected officials to solve, since it can't be fixed by spending more money.