First, the FBI raided a private business to seize safe deposit boxes and assets belonging to hundreds of people who were not suspected of having committed any crimes.

Now, prosecutors are trying to keep the public in the dark about why the brazen forfeiture effort was undertaken in the first place—and are offering little justification for why such secrecy is necessary.

Four depositions that could be crucial to understanding the motivations and intentions behind the FBI's March 2021 raid of U.S. Private Vaults, a Beverly Hills–based safe deposit box storage business, are being kept confidential at the request of federal prosecutors. Attorneys representing some victims of the raid say the depositions could contain important information about how and why the FBI decided to seize and catalog the private belongings of U.S. Private Vault's customers. They have asked the federal judge handling the case to allow the transcripts of those depositions—including one interview with Lynn Zellhart, the FBI's lead agent in the case—to be filed in their entirety.

Unless Judge R. Gary Klausner allows the depositions to be made public, attorneys for the plaintiffs will have to continue heavily redacting their filings in the case. That might be sufficient to address the acute legal issues in the lawsuit, but it obviously harms the general public's right to be informed about the bigger issues at stake.

(Reason, which has been covering this case since the beginning, plans to file a brief requesting that the depositions be unsealed.)

"If the government is successful, it means that the public will have only an incomplete window on what happened here," Robert Johnson, an attorney at the Institute for Justice who is representing some of U.S. Private Vault's customers, tells Reason. "That flips the public's right of access on its head."

As Reason has previously reported, there are substantial constitutional issues raised by the FBI's raid of U.S. Private Vaults that ought to worry any American concerned about privacy. Before raiding the business, the FBI built a lengthy case against U.S. Private Vaults' owners, who have been charged with several crimes. But the businesses' hundreds of customers were viewed as guilty by association, and the FBI's affidavit seeking permission to seize the safe deposit boxes stored at U.S. Private Vaults relied on sweeping generalizations rather than specific allegations of wrongdoing. Importantly, the warrant authorizing the raid explicitly forbade the FBI from seizing the safe deposit boxes or their contents.

But agents seized hundreds of safe deposit boxes anyway, then opened many of them and rifled through their contents under the guise of cataloging the items. That effort seems to have been a little more than a fishing expedition in search of additional criminality, and attorneys for the victims of the FBI's warrantless search are now asking that all records created by that effort be destroyed.

Why do the depositions matter to all this? The interviews with Zellhart and other FBI officials who authorized the raid could clarify key aspects of its planning and execution. Some of that might not matter to the lawsuits, but it would give the public a better view of why the FBI believed it had the authority to conduct the privacy-violating seizures.

For example, the information provided by Jessie Murray, head of the forfeiture unit at the FBI's Los Angeles field office, could give the public vital insights into how the FBI views its powers to seize and forfeit private property—but there's no way for the average person to get that information for now: 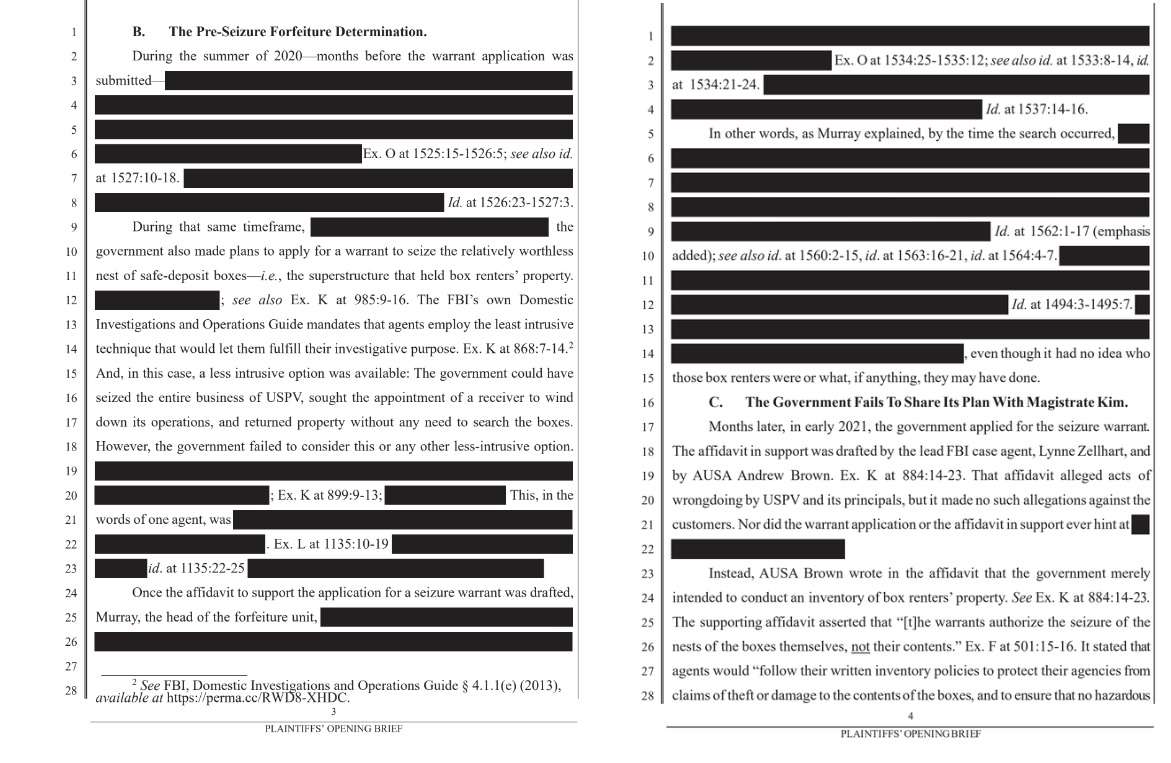 In a brief filed Monday, prosecutors made no substantial claims about why the information in the four depositions should be kept secret. Instead, they argued that "customary practice" means the only pages of depositions filed as part of the legal record would be those specifically cited in the plaintiff's opening briefs.

In other words, if attorneys for the plaintiffs agree to limit the pages of transcripts filed, they would be able to un-redact the citations in their briefs (including the screenshots posted above). In return, the rest of the depositions would remain confidential.

But why keep any parts secret? The public has a right to know how the plan to raid U.S. Private Vaults unfolded, particularly in light of Klausner ruling last year in a related case that the FBI had provided "no factual basis" for the seizures. Separately, in a ruling that denied the government's attempt to get a lawsuit over the seized items dismissed, Klausner found that the government's case against U.S. Private Vault's customers was not based on "anything more than pure conjecture."

So far, the legal wrangling over the U.S. Private Vaults raid has raised serious questions about the FBI's respect for the Fourth Amendment and whether federal agents willfully ignored the limits imposed by the very warrant authorizing the raid. Those details matter, and not just to the victims of the FBI's raid. It's understandable why the FBI wants to keep the media and public from seeing those transcripts, but that's not a compelling reason for a judge to allow this attempted cover-up.