Inflation has surged across much of the developed world in the past year as COVID-19 lockdowns eased and pent-up demand for goods and services collided with ongoing supply chain snafus.

But inflation is running higher in the United States than just about anywhere else right now. Why's that? According to a new paper from four economists at the Federal Reserve of San Francisco, it's because the American government was relatively more generous during the pandemic, borrowing and spending trillions of dollars to not only fund COVID-19 relief efforts but to line the pockets of Americans with direct payments that enlarged the money supply and overheated the economy.

"Inflation rates in the United States and other developed economies have closely tracked each other historically," the economists write in an analysis published this week. "However, since the first half of 2021, U.S. inflation has increasingly outpaced inflation in other developed countries. Estimates suggest that fiscal support measures designed to counteract the severity of the pandemic's economic effect may have contributed to this divergence."

Inflation in the U.S. hit an annualized rate of 7.9 percent in February (data for March will be released by the Bureau for Labor Statistics next week), a 40-year high. Meanwhile, inflation in similar countries like France (3.6 percent), Germany (5.1 percent), and the United Kingdom (5.5 percent) is significantly lower, according to data from the Organization for Economic Cooperation and Development (OECD), a consortium of 38 rich-world governments. (Across the OECD as a whole, the average annual inflation rate is about the same as the U.S., but that's due to the influence of outliers like Argentina—where prices are up over 52 percent in the past 12 months.)

February's global price data are not merely a snapshot, but indicative of a worrying trend. The Pew Research Center noted in November of last year that prices in the United States were rising more quickly than almost anywhere else. Between the third quarter of 2019 (the last full economic quarter before COVID-19 was first identified) and the third quarter of 2021, the U.S. inflation rate climbed by 3.58 percentage points—a larger change than in all but two other countries of the 46 nations included in the study.

Governments all over the world spent heavily to combat the pandemic, of course, but few handed out cash directly to citizens as the American government did. The four Federal Reserve researchers track sharp increases in "inflation-adjusted disposable personal income"—in layman's terms, excess spending cash—reported by American households over the past two years. "Throughout 2020 and 2021, U.S. households experienced significantly higher increases in their disposable income relative to their OECD peers," they write. 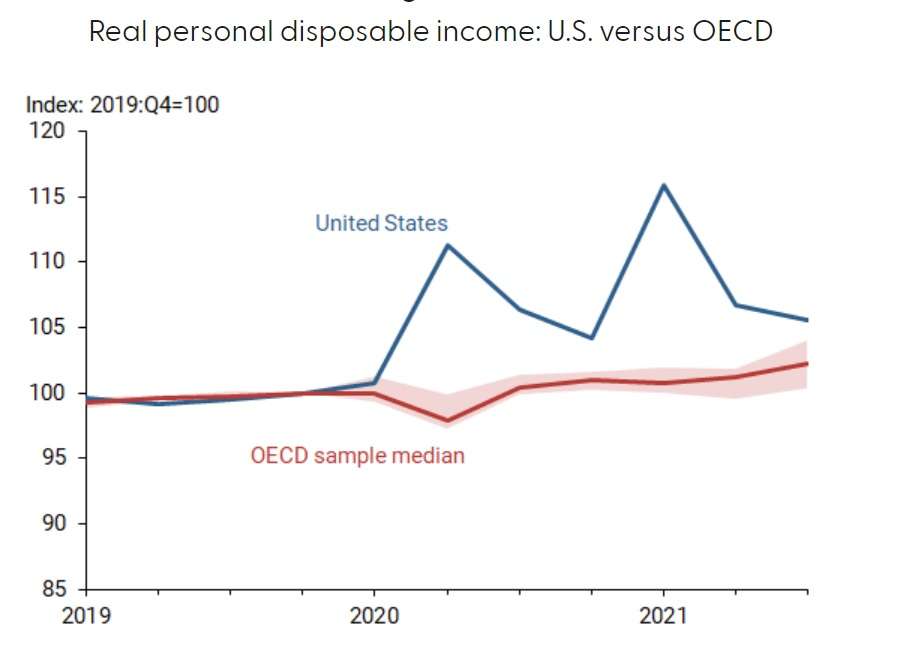 About $817 billion in direct payments to American households were delivered in three rounds during the pandemic, according to the COVID Money Tracker run by the Committee for a Responsible Federal Budget, a nonprofit that advocates for lower deficits. The first round of stimulus checks was worth $1,200 per person and was approved as part of the Coronavirus Aid, Relief, and Economic Security (CARES) Act in March 2020. Another round of $600 checks was distributed starting in December of that year.

But the big blow came in early 2021, when the Biden administration pushed through a round of $1,400 checks as part of the American Recovery Plan, passed by Congress in March 2021.

Though each round of direct checks had slightly different parameters for determining who would get the payments, much of that $817 billion landed in the bank accounts of people who had never lost their jobs and were well above the poverty line. Households earning as much as $160,000 in joint income were eligible for the final round of direct payments disbursed during the first half of 2021—and many progressives in Congress thought the cutoff should have been even higher.

We're now reaping what Congress sowed. All that excess cash is chasing the same number of goods. That's a recipe for inflation straight out of any economics textbook. The four economists conclude that "U.S. income transfers may have contributed to an increase in inflation of about 3 percentage points by the fourth quarter of 2021."

This isn't a novel idea, of course. Larry Summers, one of the Obama administration's top economic advisers, was warning about rising inflation more than a year ago. Passing another stimulus bill in the spring of 2021, Summers warned in a Washington Post op-ed, "will set off inflationary pressures of a kind we have not seen in a generation." Other top economists, including a former chairman of the International Monetary Fund, offered similar warnings. The Biden administration and Democrats in Congress did not listen, and now here we are.

The value of this Federal Reserve analysis is that it does not look forward in time and try to project what will happen, but reviews existing data to tell what did in fact happen. Putting more money directly in Americans' pockets and bank accounts caused inflation to get worse than it otherwise would have been.

In fairness, the economists also point out that a less robust response to the pandemic may have caused a different kind of economic pain. "Without these spending measures," they write, "the economy might have tipped into outright deflation and slower economic growth, the consequences of which would have been harder to manage."

Any serious attempt to grapple with America's current bout of inflation must be aware of that possible alternate reality—the grass is not necessarily greener on the other side.

But that doesn't absolve the federal government—from the White House to Congress to the Federal Reserve—of its role in worsening this mess. The whole world is suffering through a period of high inflation, but American policy makers added a uniquely high amount of fuel to the fire.