Until last year, Daniel Elder—a 34-year-old musician who lives in Nashville, Tennessee—had a promising career ahead of him. The theme of the prize-winning composer's work, truth through emotion, is evident across his catalogue of choral music, including his debut commercial album, The Heart's Reflection.

Elder isn't composing very much these days. And even if he were, no one in the industry is willing to buy his work. His publisher has blackballed him. Local choral directors refuse to program his music for fear of provoking a backlash. They won't even let him sing in the choir.

"My artistic wellspring is capped," says Elder. "I think it will come back, but things have remained in quite a rough place after all this happened."

What happened? Elder made a short statement on Instagram that went viral during the George Floyd protests in the summer of 2020.

The young composer is hardly the first person to suffer significant professional consequences after causing a social media firestorm: Virtually every day brings more examples of people saying slightly offensive things that stoke the fury of some mob. The problem is now so exhaustively covered in the media that "cancel culture" has become a top issue for many Republican voters, even though conservatives engage in cancelation as well.

But even among those cancel-culture excesses, Elder's supposed transgression stands out as particularly absurd. Though he was tarred and feathered as a racist contrarian, the Instagram post that caused all the trouble was neither racist nor contrarian. An overwhelming majority of people likely agree with the sentiment behind it, which was basically this: Arson is bad.

Elder always considered himself a man of the center-left. He was not particularly political or outspoken, but he supported liberal causes, including police reform and opposition to racism. The fact that he was on the same side as the progressive activists "made this sort of a strange betrayal," he says.

Floyd's death at the hands of Minneapolis police on May 25, 2020, caused widespread protests across the country. On May 30, around 1,000 peaceful protesters marched down the streets of Nashville as part of an "I Will Breathe" rally. But not everyone on the streets was peaceful: A group of activists joined the protest as it was drawing to a close and started smashing windows and spraying graffiti on the sides of buildings. They threw rocks at police cars, and eventually someone set the city's historic courthouse on fire.

"The courthouse windows were smashed, its walls were spray painted with graffiti and fires were started inside the building, damaging a portion of the mayor's office," noted the Nashville Tennessean. "A plaque commemorating the civil rights movement in Nashville was destroyed."

The destruction spooked Elder, who lived nearby and was thus under a city-wide curfew. He also found himself increasingly unnerved by the large number of emotional social media posts coming across his feeds that seemed to justify radicalism and groupthink.

"I saw a mob mentality around my own friends, and I worried that was what was happening on the outside, too," says Elder.

Dismayed, disenchanted, and unable to sleep, Elder decided to delete his Instagram account. He penned one last farewell message, which was cross-posted to his Twitter and professional Facebook page: "Enjoy burning it all down, you well-intentioned, blind people. I'm done." 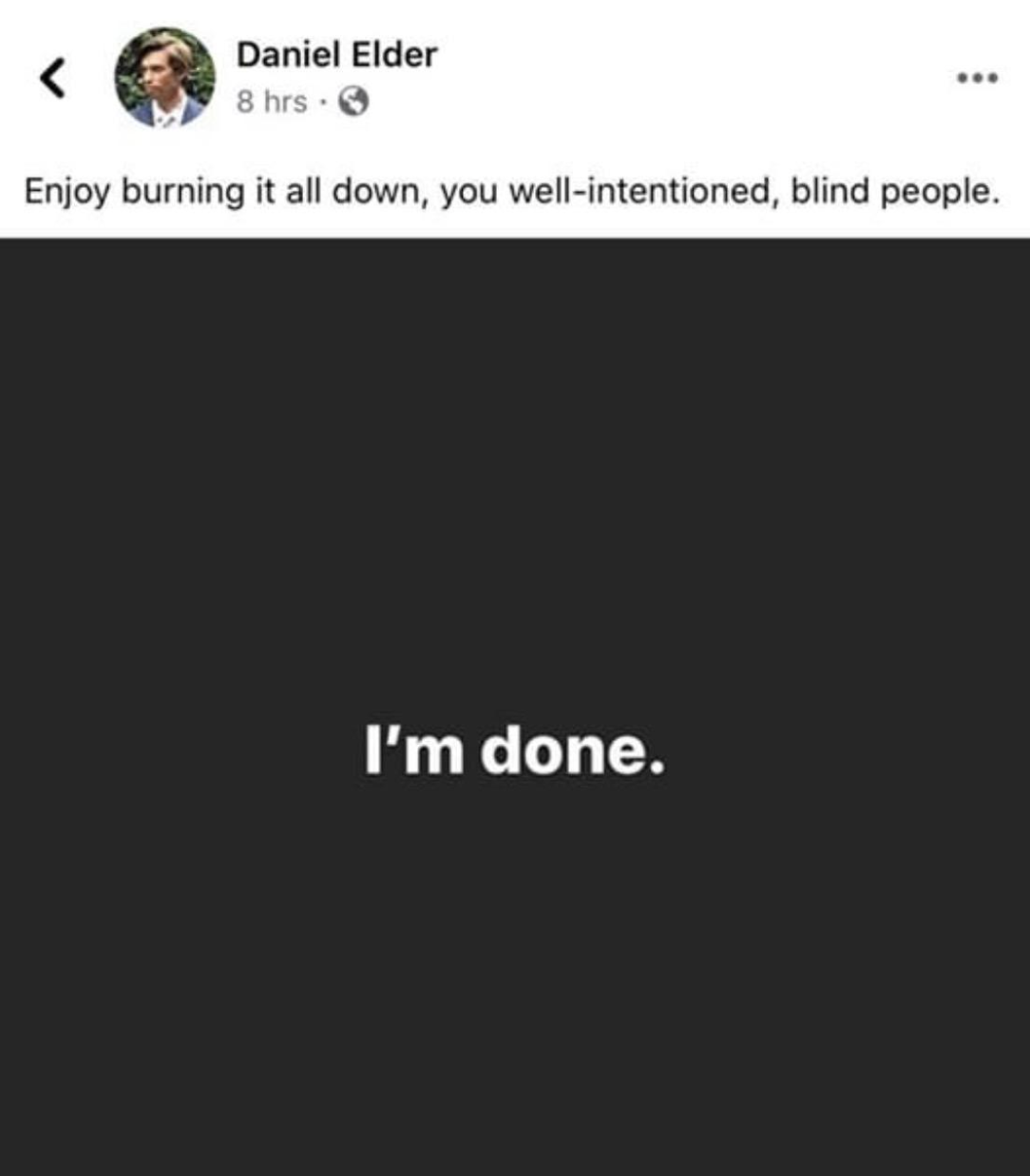 The post was unambiguous: Elder was criticizing the activists who had set the courthouse on fire. He did not malign their cause or their ethnicity (and in fact, the perpetrator was white). He did not attack the Black Lives Matter movement or criminal justice reform. He implied that the militants had good motives ("well-intentioned") but were oblivious ("blind") when it came to the self-defeating nature of their tactics.

These sentiments are not racist; in fact, they are correct. Social science research and voter surveys show that violent and destructive protests tend to backfire, eroding support for the cause in question. While a small number of far-left agitators support these tactics, the overwhelming majority of people oppose looting, riots, and arson. That is especially true of those who live in communities of color.

One might not have expected Elder's mild declaration to attract much attention. But when he woke up the next morning, critics were spamming his Facebook and YouTube pages with comments accusing him of being a racist and a "white supremacist piece of garbage." He began to receive nasty emails as well. Some were anonymously authored, expletive-laden, and ugly from start to finish. Others confessed a previous appreciation for Elder's music but noted that they could never listen to him again.

"I've relatively recently become aware of your work and have enjoyed your compositions for their sensitivity and artistry," wrote one former fan. "However, after learning of your insensitive comments on social media, however perceived as misunderstood, I've decided to unsubscribe from your [YouTube] channel and will no longer recommend your compositions to colleagues."

"It's really a shame," wrote another. "Such beautiful music and I feel like I can't do any of it now."

"I am a choir director and department head for the music department for a private school in Ohio," declared another. "I want to inform you that your rhetoric surrounding the recent protests is unacceptable and my school will not be programming your music unless and until a public apology is issued."

Many former appreciators of Elder's music expressed regret that it had come to this. One recommended that he read Robin diAngelo's White Fragility. Another expressed "hope that you find a way to lose that hate in your heart."

Again, Elder's "hateful" rhetoric was a two-sentence objection to the fire at the courthouse. He had not condemned the broader movement at all. Yet the messages did not cease.

"Do some research and maybe some inner reflection and maybe figure out where your racist tendencies are coming from," wrote another critic. "You are canceled. Black lives matter!"

Within 24 hours, the controversy had garnered the attention of GIA Publications. In the world of choral music, GIA is not merely a publisher; it is the major publisher of religious content, thanks to its association with the post–Vatican II Roman Catholic Church. GIA was Elder's publisher, and an important source of his income. On the morning of June 1, GIA President Alec Harris and media editor Susan LaBarr contacted Elder about posting an apology.

This apology had already been written by GIA; all Elder had to do was post it. The remarks prepared on his behalf are as follows, and worth reading in full:

"Over the weekend I made a post on my social media accounts that was insensitive and wrongly-worded. I deeply apologize for the anger, offense, and harm that this post caused. While this offense was not intended, it is what was created. For this I am truly sorry.

"There is no justification that I can offer for my post. So, rather than try to offer an excuse for what was done, I offer a promise for what I will do going forward. I commit to making amends and to dialogue. I commit to continue educating myself about privilege and bias. I commit to continue seeking an understanding of the experience of others, especially the Black community. I know that working for justice requires that we each first act justly. My work begins now."

LaBarr added that while "we know that you write music that promotes social justice," this was not clear to people who had read the Instagram post.

"We're feeling time pressure on this as some people are calling for boycotts," added LaBarr. "It's all very heavy."

Elder wasn't inclined to make such a groveling apology, and was dismayed to see his colleagues siding with his critics.

"I chose to be that guy who didn't issue the apology," he says. "Things went from there and it wasn't good."

Within hours, GIA issued a denunciation of Elder.

"The views expressed in composer Daniel Elder's incendiary social media post on Sunday evening do not reflect the values of GIA or our employees," it read. "GIA opposes racism in all its forms and is committed to do what Michelle Obama called 'the honest, uncomfortable work of rooting it out.'"

Note this PR statement endorses the view that Elder had made an "incendiary" statement. Neither Harris nor LaBarr responded to a request for clarification as to which aspect of Elder's anti-arson agenda they oppose.

GIA also announced that the company would no longer publish Elder.

"We are grateful to those who brought this to our attention and to all who continue to hold individuals and organizations to account," the statement concluded.

GIA made this announcement on Facebook. Virtually all the comments were supportive, though one person asked why the company had not scrubbed all referenced to Elder on its website. ("What's the plan?" asked this individual. "Keep supporting a bigot?")

For Elder, the consequences were far-reaching. The coronavirus pandemic had already upended his business: In the era of COVID-19, few activities had become as verboten as choir singing. Without the support of a publisher and professional network, Elder's work was impossible. Moreover, local choral directors refuse to do business with him because of the controversy. They are afraid to associate with him, or to be seen as defending him in any way.

"It's a bad look for them," says Elder. "It's really quite extreme, the effect this has had."

The toll on Elder's mental well-being has been equally catastrophic: losing countless friends, colleagues, and fans is no small matter for an artist. He has seen a therapist and a psychiatrist, and he says he has needed to be "talked off the ledge" several times. Needless to say, he has struggled to compose new music since everything fell apart.

Over the past year, the saliency of the term cancel culture has risen dramatically. Partisans have appropriated the term; every time a political figure comes under attack, his or her allies whine about cancelation. This is true for both major parties. Republicans complain that legitimate criticisms of former President Donald Trump and QAnon-curious Rep. Marjorie Taylor Greene (R–Ga.) are attempted cancelations; New York's embattled Democratic Gov. Andrew Cuomo has said the same about his own situation. None of those people were fit for office, and wanting them to face political consequences is democratic accountability, not cancel culture.

This partisan corruption of the term is a shame, because the phenomenon is real. What happened to Elder has happened to countless others. And as with so many of those others, Elder's story doesn't have a happy ending. He has survived his ordeal only in the most literal sense: His career is in shambles, and recovering will be extremely difficult. Social media has a long memory.

Nevertheless, the experience has positively impacted Elder in one way, he tells me: It has made him less ideologically narrow-minded.

"Because I was exiled, I started listening to voices on the right and the center, especially these classical liberals who have been exiled from the leftist movement," he says. "The strange silver lining is this shook me out of my prejudices a little bit."