Rebekah Jones, the former Florida Department of Health web employee who has garnered lots of media attention and whistleblower status for alleging a conspiracy to cover up COVID-19 deaths, has been booted off Twitter, at least temporarily.

Jones told the Miami Herald that the reason she was blocked from Twitter was that she got a bit overenthusiastic sharing a recent Herald story about her alleged whistleblowing and tripped Twitter's rules against spamming.

Florida Gov. Ron DeSantis, the chief target of Jones' criticism, strongly opposes deplatforming. He recently signed into law a bill that mandates social media companies explain to users why they've been banned. The new law also requires that platforms like Twitter and Facebook carry messages from candidates for office no matter what those messages say (unless it's obscene). Platforms face massive fines of $250,000 per day for statewide offices if they refuse to comply with the law.

Given his contempt for the ability of private companies to boot users they don't like, you might think DeSantis would express some sort of principled concern about Jones' ban or care whether it was justified, even though new evidence strongly suggests the coverup she alleges didn't actually happen.

After his office discovered Jones had been deplatformed by Twitter, his office released the following statement:

This decision was long overdue. Rebekah Jones is the Typhoid Mary of COVID-19 disinformation and has harmed many hardworking DOOH employees with her defamatory conspiracy theories.

I hope someone will ask Ms. Jones why she thinks she got suspended – will she allege that Governor DeSantis is somehow behind Twitter's decision? That would be deeply ironic if she tried to spin that falsehood into her conspiracy theory, given the Governor's stance on Big Tech.

The Jones ban is interesting for another reason: The bill DeSantis signed also forbids social media platforms from blocking the sharing of news stories from media outlets. This part of the bill was clearly intended to prevent social media platforms from claiming "disinformation" and stopping users from passing along, for example, a New York Post story about the contents of Hunter Biden's laptop in 2020. So it's a bit rich for DeSantis' office to support Twitter deplatforming Jones for "disinformation" after passing a law specifically prohibiting Twitter in other contexts from stopping the spread of what it considers "disinformation."

DeSantis' Press Secretary Christina Pushaw has responded to accusations of hypocrisy by insisting that Twitter isn't violating Jones' "First Amendment" rights (I used scare quotes because nobody has a First Amendment right to post on a private platform like Twitter) because she was blocked not for her speech, but for violating Twitter's "platform manipulation" rules. Pushaw believes Jones did a lot more than just spamming folks.

Whatever his office might claim, DeSantis' critics are absolutely right that his Big Tech deplatforming bill is not about protecting speech, it's about political control of what is and is not allowed on social media platforms. DeSantis can decide what is "misinformation," but Twitter cannot.

Jones believes that she'll be back on the platform soon. Based on the law DeSantis signed, Twitter might have to restore her platform. On Monday afternoon, I tweeted out this joke response:

Okay, so the next thing to happen will be for Rebekah Jones to run for office so that, under Ron DeSantis' own pet law, Twitter will have to restore her account. Right?

On Monday evening, Jones announced that she's running for Congress in an attempt to unseat GOP Rep. Matt Gaetz. If she actually follows through and files papers as a candidate, then under DeSantis' law, Twitter will be obligated to host campaign messages from Jones. Because there's no exception in Florida's law for libel or defamation, Jones can then use this mandated platform to smear DeSantis as much as she wants.

Jordan Kirkland at The Capitolist says Jones is misinterpreting the law because she's not a Florida resident. But Kirkland's wrong here. The part of the law that mandates that candidates be platformed does not require them to be Florida residents. The Constitution requires that Jones must live in Florida in order to represent the state in Congress, but that's it. All she needs to be covered by the antiplatform law is to be certified as a candidate. Read the bill for yourself here.

We knew all along that this bill was a complete mess, full of provisions that were bound to be used to try to force tech companies to serve as hosts for political bullying. If DeSantis ends up being its first victim, he'll have nobody to blame but himself.

As of Tuesday morning, though, it's not clear whether this face off between Jones and Gaetz is going to happen. Jones has posted a follow-up message on Instagram backing off on her announcement that she's going to run: 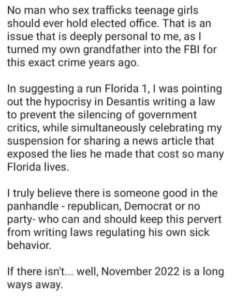 Pushaw has also emailed Reason some additional comments in response to this post. She writes in part:

Governor DeSantis supports every Floridian's right to free speech. Even conspiracy grifters like Rebekah Jones have First Amendment rights, and their rights must be protected. However, she was not censored for anything she said. Jones wasn't suspended for posting left-wing conspiracy theories, COVID disinformation, or targeted harassment and defamation — although she did all that. Jones was suspended for clear cut TOS violations like buying followers and using multiple accounts. (2 of her alt accounts, rebel_geo and taytaygreen5, have also been suspended in the last 24 hours).

She adds, "If you read the Florida legislation, you know there is nothing in it that says Big Tech platforms can't enforce any content moderation policies. On the contrary, the legislation merely requires social media platforms to communicate their policies clearly to their users—and to enforce those policies consistently, without regard to political or ideological leanings."

That's a true description of the part of the law that covers general users. But the law is explicitly different for candidates for office. The law is clear that candidates are exempt from a platform's own moderation policies.

This post has been updated to include a subsequent post from Jones and additional comments from Pushaw.