The federal government in 2020 has executed more death row prisoners than all 50 states combined, making it a significant outlier in a country that is growing less and less interested in using the death penalty as a form of punishment.

Those are the major findings of a year-end report by the Death Penalty Information Center (DPIC), which tracks statistics surrounding executions in America in both the states and the federal government.

In total, 17 death row prisoners were executed across the United States in 2020. Ten of those were federal prisoners. Five states (Texas, Alabama, Georgia, Missouri, and Tennessee) are responsible for the seven other executions.

The divergence of trends here is wide. The federal government had not executed any prisoners for nearly 20 years and there had only been three of these executions since 1963. Then, in the course of just six months, Attorney General William Barr led a parade of executions amidst a pandemic.

But in the states, the trends are going in the exact opposite direction. The DPIC report notes that this is the first time in the history of the United States where the federal government executed more civilians than the states. State executions have dropped to a 37-year low. Death sentences themselves are dropping significantly as states turn away from the punishment. States sentenced convicted prisoners to death only 18 times in 2020, the lowest number since 1972.

Part of that trend is likely attributable to the speed of justice plunging to a crawl due to the COVID-19 response. The DPIC notes that most of the new death penalty sentences were imposed in the first three months of 2020, before courts across the country started shutting down. 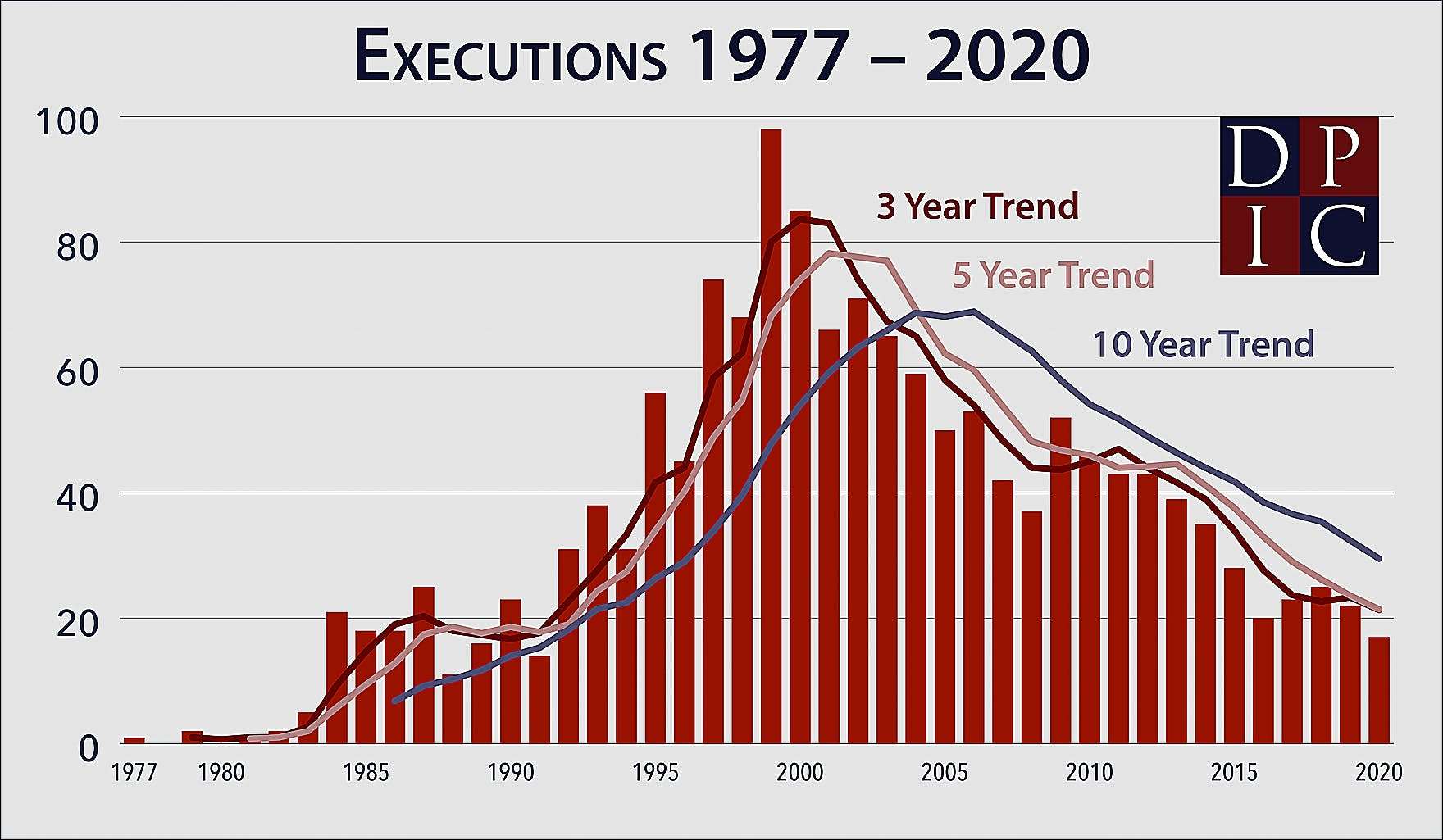 But even keeping the pandemic in mind, there is a clear 10-year trend in fewer death sentences and fewer executions across the states. In 2020, Colorado joined 21 other states in abolishing the death penalty, and Gov. Jared Polis commuted the sentences of the three people on death row to life without parole. Even in states that do have the death penalty still on the books, 12 of those states have not actually executed any inmates in 10 years.

It's very much worth noting that this decline in the use of the death penalty has not resulted in an increase in violent crime and homicides. A chart looking at violent crime rates across the country for the last 20 years shows a downward curve that looks a lot like the decline in death penalties and executions. A DPIC fact sheet notes that 88 percent of criminology experts "reject the notion that the death penalty acts as a deterrent to murder."

2020 also saw five death row exonerations. Paul Browning, Walter Ogrod, Kareem Johnson, Curtis Flowers, and Robert DuBoise were all freed from death row this year, all previously convicted in cases marked with prosecutorial conduct. But three prisoners—Donnie Lance, Nathaniel Woods, and Walter Barton—were not so fortunate. Even though evidence existed that likely showed that the men were innocent and had been wrongfully convicted, the three were nevertheless executed.

We keep discovering that people on death row are actually innocent. We can see the data clearly showing a downward trend in both violent crime and executions, evidence that the death penalty's correlation as a deterrent is simply not there. The death penalty results in the state killing people who may well be innocent while not actually preventing future murders. It's another terrible government bureaucratic authority that persists even though it doesn't accomplish what proponents insist that it does.