On Tuesday morning, Facebook CEO Mark Zuckerberg and Twitter CEO Jack Dorsey once again appeared before Congress to answer questions about their companies' content moderation decisions. This time, the public grilling was premised on how the two social media giants handled information related to the 2020 election. But like previous forays into probing the business practices of Facebook and Twitter, this one—which is still ongoing as I write this—quickly turned into a bipartisan grievance fest that had little to do with realistic regulation of online speech or U.S. tech companies (or current American law).

Instead, Senate Democrats and Republicans spent the first few hours of the hearing pummeling the tech CEOs with a litany of partisan grievances and culture war talking points related to election content.

Sen. Lindsey Graham (R–S.C.) blasted Twitter and Facebook for trying to keep users engaged in a way that could possibly "create a health hazard over time" and suggested they had "editorial control over the New York Post" because "they decided—maybe for a good reason, I don't know—that the New York Post articles about Hunter Biden needed to be flagged, excluded from distribution, or made hard to find." 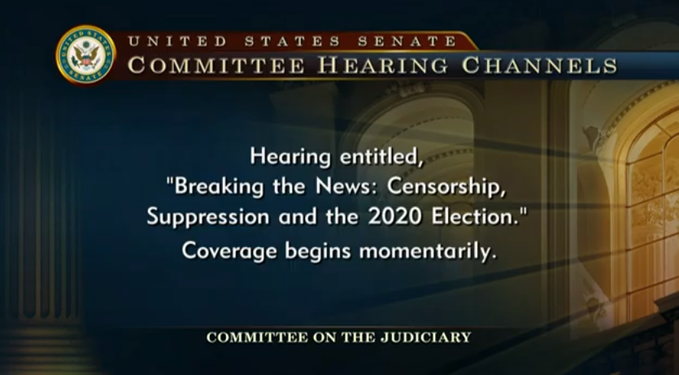 Sen. Mike Lee (R–Utah) grilled Zuckerberg over Facebook's political donations and the decision to ban two ads, deemed by Facebook third-party fact-checkers to be "partly false information," concerning the Biden/Harris presidential ticket and abortion. He grilled Dorsey over temporarily suspending the account of a government official.

Enough @SenFeinstein with pretending that any company is in charge of protecting the country from others' bad speech.

No one does. We can encourage platforms to take steps but raking them over the coals because they didn't do the impossible is a misuse of your power. #Section230

Once again, Republican lawmakers called for fewer limits on content—or at least, certain kinds of it—while Democrats called for more curation. There's no way Facebook and Twitter can appease both sides…which is why we get this muddled, ever-changing, make-no-one-happy response to social media content moderation.

Of course, both sides agree that they should get more say over the decisions of a private company and the speech of its myriad users.

On Tuesday morning, senators kept blaming the federal communications statute Section 230 for any and all issues with social companies failing to strike the right content balance. This lets them give the impression that there are special rules allowing Big Tech to get away with bad behavior, but the underlying decisions and behavior they object to suggests they're really just mad at the First Amendment and free markets.

I'm not sure if Graham grasps that his real issue is with the First Amendment, asking if aside from illegal content there is a role for government in content moderation.

The First Amendment might have a say on that question. #Section230

"The thing that @LindseyGrahamSC is misleading everyone about right now is that it's not #Section230 he's mad at, it's the 1st Amendment," tweeted Techdirt Editor in Chief Mike Masnick.

Sen. John Cornyn (R–Texas) suggested that private businesses in any way limiting or commenting on speech by government officials was illegal censorship, while the government dictating what speech is not or must be allowed on a private platform is not a First Amendment violation. The exact opposite is true, of course, and none of that is because of Section 230.

.@jack responds that Twitter is trying to encourage more speech while also trying to serve customers by limiting abuse, harassments, and language that could lead to offline harm.

"The underlying tone of this hearing is existential angst over the emerging divide about how consensual reality is negotiated. When we had three TV networks, three newspapers, and a couple of big Churches this was all much easier," commented Kristian Stout, director of innovation policy at the International Center for Law and Economics, on Twitter.

This has been the overarching tone of government policy concerning the intersection of speech and technology for years, and it's why we've seen them going after the same few companies with such a wide array of accusations—sex crimes, antitrust violations, political bias, election interference, warping children's brains, creating hate crimes, and much more. They're throwing whatever they've got at digital companies in a desperate attempt to regain control of the information environment. It's a doomed battle in the end—and a mighty tedious one along the way.