In cities around the world, crackdowns on protesting can't seem to stop people from pouring out into the streets. Here in the U.S., federal agents just had an hourslong standoff with protestors in Portland after people tied star-shaped balloons with messages about immigration (such as "the U.S. locks up people seeking asylum") taped to them to the gate of a U.S. Immigration and Customs Enforcement building.

Department of Homeland Security officers "advanced on demonstrators soon after they arrived Saturday night…setting off an hours-long, back-and-forth struggle between police and protesters," reports The Oregonian:

Federal officers then used smoke and impact munitions to break up the crowd for the next several hours. Protesters threw playground balls or rocks in response. Federal officers detained several people, although the exact number of arrestees remains unclear….

Saturday's demonstration started with a march from Willamette Park in South Portland. A flier for the event described it as a solidarity march against deportation. As marchers walked, they chanted messages such as "Black Lives Matter!" and "What's outrageous? Kids in cages." Many people carried silver and gold balloons shaped like stars. A fact about U.S. immigrations policy was taped to each balloon. 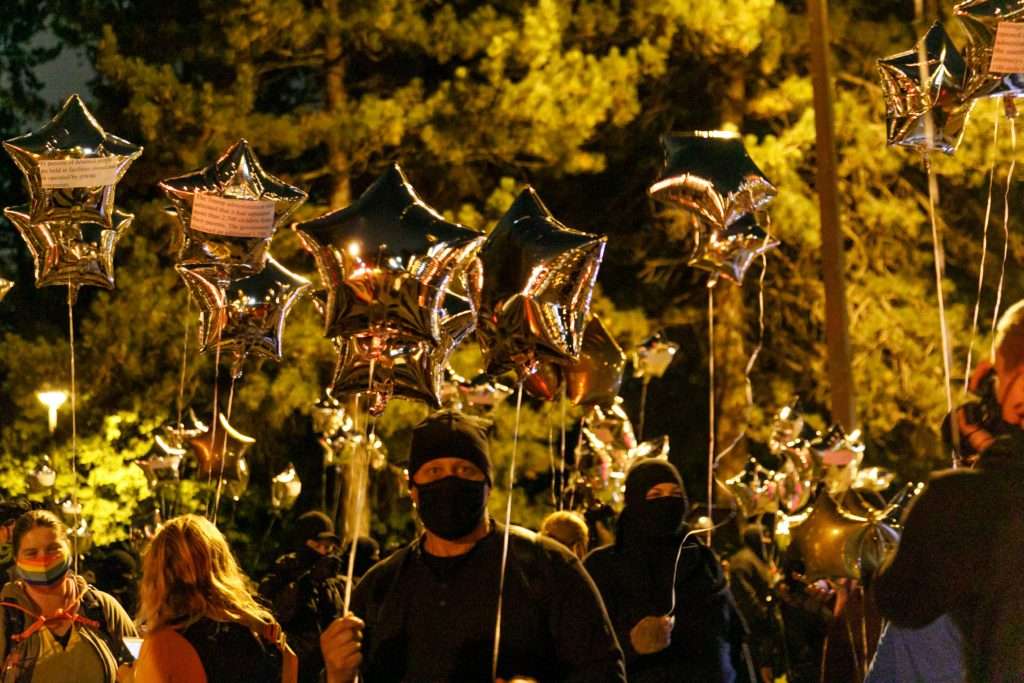 In Phoenix, "nearly every attendee of a Saturday protest against police in downtown Phoenix was arrested after police say the group marched in the road, knocked barricades into the road, and threw smoke bombs at officers," The Arizona Republic reports:

"As officers began making arrests, another incendiary device was thrown at them. Due to the ongoing criminal activity and assault, the Phoenix Police deployed less lethal munitions in order to safely make arrests," Justus said.

Protest group The W.E. Rising Project posted on social media that police hit at least one protester in the face with a pepper ball.

In Seattle, police ordered protesters to disperse after someone allegedly set a small fire and some street signs were spray-painted. It does not seem they arrested the fire starter or the vandals, but they did book five demonstrators for "failure to disperse, pedestrian interference, obstruction and resisting arrest."

Meanwhile, across the Pacific Ocean, "Thai authorities shut down parts of Bangkok's commercial center and crippled public rail networks over the weekend in an effort to prevent young demonstrators from continuing their antigovernment protests," The New York Times informs us. "It didn't work."

Tens of thousands of members of the pro-democracy movement, which has been galvanized by a political awakening among social media savvy students, gathered in Thailand's capital and in about 20 provinces on Saturday and Sunday to call for fresh elections, a new Constitution and reforms to the monarchy's lofty position in Thai society.

In Belarus this weekend, the AP reports, "tens of thousands of people marched…demanding the ouster of the country's authoritarian leader who won his sixth term in office in an election widely seen as rigged."

I saw a generation with one voice during the #PrayerWalk in Ilorin Today.

We prayed in Christianity & in Islam. We prayed for those who have lost their lives to #PoliceBrutality & insecurity & we prayed for our dear country, Nigeria????????.

In Nigeria, "thousands of people have been taking to the streets of Lagos over the past week to protest against police brutality," says Al Jazeera.

After days of #EndSARS demonstrations across Nigeria and the diaspora, authorities on Sunday announced the dissolution of SARS and later ordered all personnel to report to the police headquarters in the capital, Abuja, for debriefing and psychological and medical examination. Meanwhile, the forming of a new Special Weapons and Tactics (SWAT) team was announced to replace SARS.

However, the announcements did not satisfy protesters, who viewed them as just another renaming exercise and pledged to stay on the streets until their demands are met.

These include the immediate release of all arrested protesters, justice for all deceased victims of brutality and appropriate compensation for their families, an independent body to oversee the investigation and persecution of all reports of police misconduct, psychological evaluation and retraining of all disbanded SARS officers before they can be redeployed, and an increase in police salary so they are adequately compensated for protecting the lives and property of the citizens.

And in South America…

Tens of thousands of Chileans protested in the streets of Santiago demanding government reform as they marked the one-year anniversary of mass protests that left over 30 dead and thousands more injured https://t.co/imdYDxdo18 pic.twitter.com/Aab1UQgkps

New York Post stands by Biden story as other news outlets question its claims. Two New York Post reporters allegedly declined to have their names attached to the story about Hunter Biden's emails that has become the subject of so much social media drama. "The New York Times, The Washington Post and The Wall Street Journal have reported that they could not independently verify the data in the Post article, which included hedging language, referring at one point to an email 'allegedly sent' to Hunter Biden," the Times reports. A New York Post statement said "the story was vetted and The Post stands by its reporting,"

Pennsylvania restaurant wins lawsuit against lockdown. Lebanon County's Taste of Sicily, cited for violating state shutdown orders after fully reopening back in May, won a lawsuit against Pennsylvania Gov. Tom Wolf over the emergency orders. "The restaurant is currently waiting for a hearing date against the Department of Agriculture," reports WHP-TV.

What an odd tweet. It leaves out what happened to that lawsuit. You know, the one that got tossed (easily) on 1st Amendment grounds? https://t.co/yJHntsu0UM https://t.co/IXVPlRqt0K

• Another lawsuit alleges that hotels are legally liable for any crime that takes place within their rooms.

• Two men were arrested and charged with trafficking a person for prostitution and engaging in organized criminal activity after telling a cop who pulled them over that they were going to meet an adult woman who police thought may be involved in prostitution.

• The NYPD is now the private party police.