Human beings are often terrible at foresight and generally learn hard lessons chiefly from failure. That has certainly been the case for the COVID-19 pandemic. Public health officials, politicians, and the public, by means of repeated policy failures, are still learning what works when it comes to mitigating the COVID-19 pandemic.

A partial list of initial failures in the U.S. includes underestimating the virulence of the pathogen by some public health officials; a massive bureaucratic screw-up by the Centers for Disease Control and Prevention (CDC) that delayed the rollout of diagnostic testing as the pandemic was taking off; the belief that airborne transmission was not a significant route of infection but instead the virus was chiefly passed along via direct contact with infected people and indirect contact with surfaces in the immediate environment; the early assertion that citizens didn't need to wear face masks to protect themselves from infection; epidemiological models making worst-case projections of millions of COVID-19 deaths by assuming that people wouldn't change their behaviors; the claim that the anti-malarial drug hydroxychloroquine was a "game changer" as a COVID-19 treatment; and a president who has doggedly insisted since February that the virus would miraculously fade or disappear soon.

So what has been learned over the past eight months? While conclusions are still preliminary, researchers now calculate that the COVID-19 coronavirus is about three times more contagious than seasonal flu; the availability of diagnostic testing in the U.S. has greatly improved but is still nowhere near where it needs to be; airborne transmission contributes significantly to the spread of the disease; when the background rate of infections is high the widespread adoption of face masks is an effective and very economically valuable method for stemming COVID-19 infections; when epidemiological models took into account actual changes in human behavior, their COVID-19 death projections declined steeply; and the Food and Drug Administration (FDA) has concluded that hydroxychloroquine is not a useful COVID-19 therapeutic. But what about President Donald Trump's oft-repeated prediction that the virus will one day soon just disappear?

Epidemiological research suggests that COVID-19 will only fade away once the threshold for herd immunity is reached. Herd immunity is the resistance to the spread of a contagious disease that results if a sufficiently high proportion of a population is immune to the illness. Some people are still susceptible, but they are surrounded by immune individuals who serve as a barrier, preventing the microbes from reaching them. Herd immunity can be achieved via mass infection or mass vaccination. Epidemiologists estimate that the COVID-19 threshold for herd immunity is around 60 to 70 percent.

Some of Trump's fans have recently been touting the idea that COVID-19 herd immunity is closer than initial epidemiological projections have suggested. I, too, have reported that very preliminary studies on unsuspected preexisting T-cell immunity to the coronavirus and speculative modeling results suggest that the effective herd immunity threshold may actually be close, at least, in some countries and some regions of the U.S. (In other words, the possibility of a lower herd immunity threshold is a lucky accident, not the result of presidential prescience.)

Now a new modeling study in the Proceedings of the National Academy of Sciences by a team of researchers associated with the University of Illinois at Urbana-Champaign suggests that the COVID-19 "heterogeneity-modified herd immunity" threshold has already been reached in some metropolitan areas of the U.S. Their model stands in contrast to many of the epidemiological models noted above that are based on the homogeneous assumption that basically every individual is equally liable to become infected and then to transmit their infection on to others.

The Illinois researchers define heterogeneity as the biological and social susceptibility of individual members of the population to COVID-19 viral infection. Biological heterogeneity takes into account differences in such factors as the strength of immune responses, genetics, age, and comorbidities. Social heterogeneity reflects variations in the number of close contacts that each individual has with different people. Basically the more social a person is, the more likely they are to get infected early in the epidemic and then become immune. The researchers combine biological and social heterogeneity to derive what they call an immunity factor.

Taking the effects of biological and social heterogeneity on COVID-19 transmissibility, the researchers calculate that the herd immunity threshold is likely somewhere between 20 and 30 percent of the population. According to recent reports, more than 20 percent of New York City residents have probably been infected with the coronavirus.

Seeking to see what might happen this fall, the researchers model possible outcomes of the second wave of the COVID-19 epidemic in New York City and Chicago. They consider what they call a "worst-case scenario" in which all current mitigation efforts are fully relaxed and bars, theaters, and restaurants open with negligible social distancing and mask-wearing. Their heterogeneity-modified model projects virtually no second wave of COVID-19 cases in New York City which indicates that herd immunity has likely been achieved there. 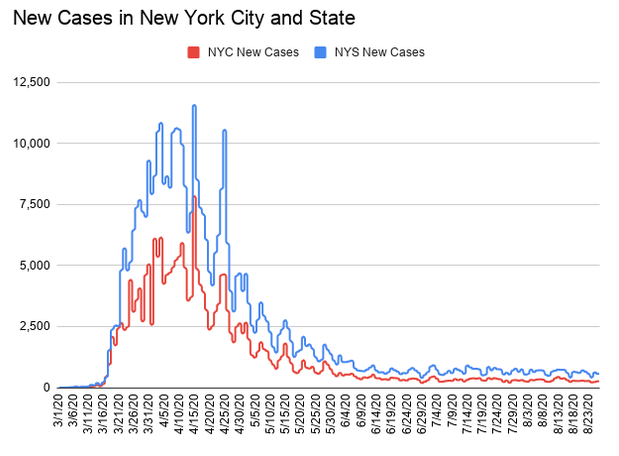 On the other hand, they calculate that Chicago has not passed the herd immunity threshold. Nevertheless, the effects of biological and social heterogeneity would still result in a substantial reduction of the magnitude of the second wave there, even under the worst-case scenario. The possible good news is that their results suggest "that the second wave can be completely eliminated in such medium-hit locations [as Chicago], if appropriate and economically mild mitigation measures are adopted, including e.g. mask wearing, contact tracing, and targeted limitation of potential super-spreading events, through limitations on indoor bars, dining and other venues."

Based on data from late May, researchers also calculate that most states were then still far away from reaching their heterogeneity-modified herd immunity thresholds. However, this summer's surge in COVID-19 cases may have brought some states closer to herd immunity. While the coronavirus may not just fade away, these calculations imply that the U.S. has a good chance to avoid a potentially disastrous second wave this fall if the public maintains reasonable social distancing and mask-wearing efforts.