To fully restart the U.S. economy by August, massive population testing for infections with the virus that causes COVID-19 is essential, according to the roadmap to pandemic resilience just issued today by the Safra Center for Ethics at Harvard University. Testing results should be available the next day at the latest. The roadmap also sketches out a system of tracing the contacts of people who are infected by the coronavirus. Those contacts are warned about their exposure and tested numerous times. If a contact's tests turn positive they should be provided supported isolation that includes job protections, safe shelter, food, and health care. The authors of the report estimate that this scheme for testing, tracing, and supported isolation (TTSI) would cost between $50 to $300 billion over two years. As they note this is extremely cheap compared to "the economic cost of continued collective quarantine of $100 to 350 billion a month."

How much testing would be required to implement their proposed roadmap? "We estimate that steady-state testing levels that would permit replacing collective stay-at-home orders as the main tool for disease control with a testing—tracing-and-warning—supported-isolation, or TTSI, methodology will eventually need to reach a capacity to test 2 to 6% of the population per day, or between 5 and 20 million people per day," note the authors.

How would they achieve a rapid increase in testing capacity? Given how badly federal agencies botched testing as the coronavirus outbreak was growing, the authors wisely recommend turning to the private sector. "The government should not hesitate to pay substantial sums to incentivize the private sector to apply ingenuity and speed to develop solutions," note the authors. "Prizes and advance market commitments are two tools to be considered."

In order to warn people who have come into contact with an infected person that they should be tested, the authors recommend initially hiring and training 100,000 contact tracers at a cost of $3.6 billion. Such manual contact tracing could be supplemented with opt-in peer-to-peer cell phone warning apps. The researchers suggest that the deployment of such apps include maximal privacy protection, use open-source code amenable to independent and regulatory audit, and prohibit the use of any data from these apps for commercial purposes.

Frustratingly, the Safra Center authors do not discuss prohibiting government abuse of the tracking functions and data collected by the apps (that is, immigration authorities and law enforcement). In order to forestall our government from using the pandemic as an excuse to further violate our civil rights and privacy, we should adopt the proposals recommended by the Ada Lovelace Institute (ALI) in its similar testing-and-tracking scheme for the United Kingdom. The ALI authors warn that "there is a real risk that the expansion of state intrusion into individuals' lives that occurs during emergencies endures beyond the originating crisis." Consequently, they recommend:

Legal and technical sunset clauses must be built into the design of new powers and technologies. Government must provide advance primary legislation regulating the processing of data by both public and private sector actors in the use of technology to transition from the crisis. Government must encourage privacy-by-design in technical implementations and must choose privacy-preserving protocols to underscore technical measures.

Recommendations like these must be part of any wide-scale U.S. COVID-19 testing and tracing plan.

The Safra Center authors sketch out a four-phase program aimed at fully reopening the economy by the end of this summer. During phase one, they recommend increasing publicly-funded diagnostic testing capability to 2 million tests per day, focusing on everyone with symptoms and their close contacts, as well as essential workers, nursing home residents, and incarcerated people. With this amount of testing, they estimate that 40 to 55 percent of people could return to work. 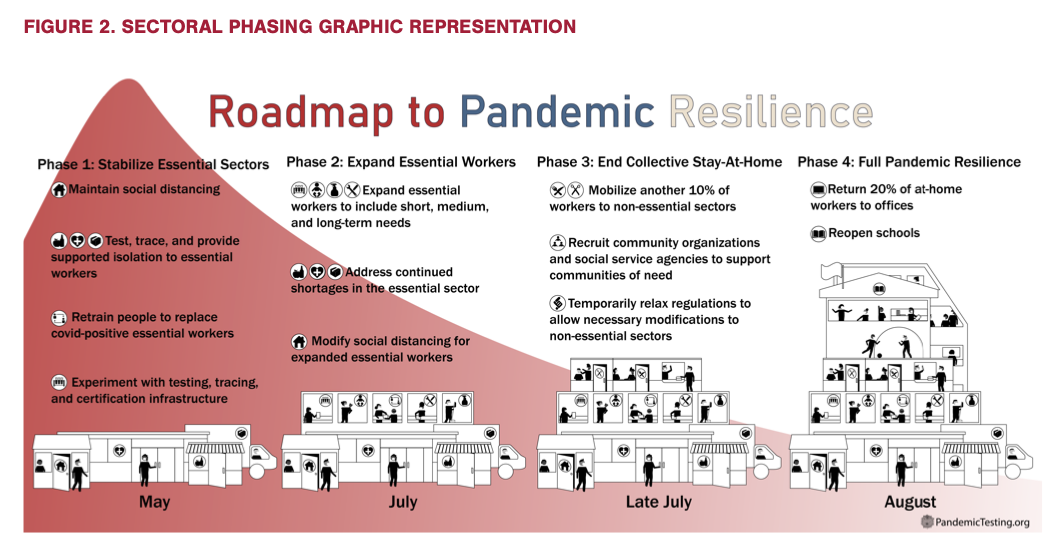 With the testing and tracing regime solidly in place, COVID-19 case rates would decline, thus enabling the initiation of phase two in the next month. With further expansion of testing and tracing, 70 percent of the workforce could return to work. Those who can work at home would still do so and vulnerable people (e.g. those over age 60) would continue to limit their time in the community. In phase three, increased testing and tracing that covers 80 percent of the workforce in localities would allow most non-telecommuting laborers to return to work. In phase four, universal testing would be available and schools could reopen.

The roadmap, as outlined, could likely work. However, assuming that the real and substantial technical difficulties in ramping up that much daily testing can be overcome, the ongoing economic distress makes it unlikely that the public would endure the implementation of such a careful plan. And even if the public did remain patient, it's doubtful that the bureaucrats and politicians in Washington, including our chaotic president, have the competence to pull it off.