"About 30 percent of people in Stockholm have reached a level of immunity," Sweden's ambassador to the U.S. told NPR on April 26. "We could reach herd immunity [to the coronavirus] in the capital as early as next month."

The comment turns out to have been a bit hasty: The report on the city's infection rate that the ambassador seems to have been referencing had already been withdrawn without explanation four days earlier. But the larger issue of herd immunity remains important.

Herd immunity is the resistance to the spread of a contagious disease that results if a sufficiently high proportion of a population is immune to the illness. Some people are still susceptible, but they are surrounded by immune indviduals, who serve as a barrier preventing the microbes from reaching them. You can achieve this through either mass infection or mass vaccination. 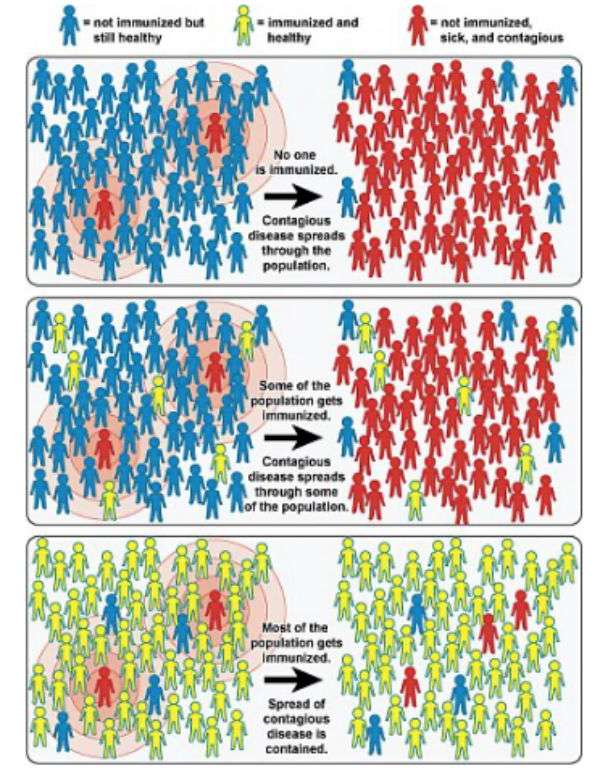 Until there is an effective COVID-19 vaccine, the only way to achieve herd immunity would be to allow the microbe to infect enough people to form that barrier protecting the susceptible. The breadth of the barrier required to achieve herd immunity depends in large part on just how contagious a specific disease is. For example: In a susceptible, unvaccinated population, each measles carrier will infect an estimated 12 to 18 other people. In the nomenclature of epidemiology, the basic reproduction number or R0 ("R naught") of measles is 12 to 18. 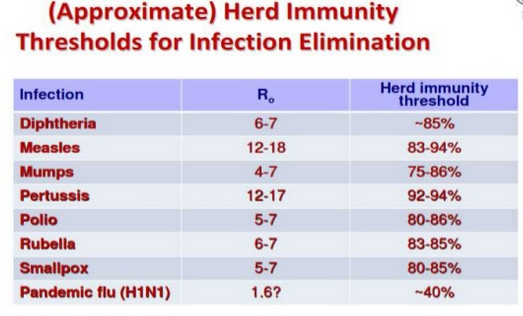 While there is still some debate about this, the R0 of the COVID-19 coronavirus without interventions is generally estimated to be between 2.2 and 2.7. If the R0 is below 1, that means the outbreak is abating as fewer and fewer people are infected; if it remains above 1, the epidemic is ongoing. The goal of social distancing practices is to stem the epidemic by driving the R0 of the coronavirus below 1.

Of course, achieving herd immunity would also eventually result in an R0 that falls below 1 and a declining number of infections.

Most the evidence so far suggests that people who recover from a COVID-19 coronavirus infection do, at least for a time, develop immunity to the microbe. If that's true, what is the disease-induced herd immunity threshold for the COVID-19 coronavirus? Various epidemiologists offer different answers, depending upon their estimates for the disease's R0 and other variables, but most have converged on a threshold at around 60 to 70 percent.

More recently, some researchers have suggested that this threshold may be too high. In a new preprint, three mathematicians from Sweden and the United Kingdom, using an R0 of 2.5, calculate a reduction in the herd immunity threshold from 60 percent to 43 percent by incorporating some assumptions with respect to populations' social activity levels and age structures.

A couple of new reports speculatively lower the possible herd immunity threshold for the coronavirus to just 10 to 20 percent of the population. This conjecture depends chiefly on assumptions about just how susceptible and connected members of the herd are. In their preprint, a team of European epidemiologists led by the Liverpool School of Tropical Medicine mathematical bioscientist Gabriela Gomes explains how this might work.

If highly susceptible herd members become infected and thus immune first, the preprint says, their subsequent interactions with the still-uninfected will not result in additional cases. Basically, the virus stymies itself by disproportionately removing those most useful to it from contributing to its future transmission. In addition, if herd members are very loosely connected and interact with one another rarely, the virus will have a much harder time jumping to its next victims. Sustained social distancing aimed at flattening the curve of coronavirus infections and cases mimics this effect.

Adopting insights from the Gomes article, the British statistician Nic Lewis suggests that Stockholm County in Sweden may indeed have already achieved herd immunity. But if formerly standoffish herd members start frequently hanging out together in, say, bars, restaurants, theaters and baseball games, the percent of the population needed to achieve herd immunity will of course rise.

There are no solid estimates for the percentage of the U.S. population that has already been infected by the coronavirus, but Youyang Gu and his team at COVID19-Projections estimate that right now the number is between 2.2 to 4.7 percent. That would mean that somewhere between 7.3 and 15.5 million Americans have been infected. A similar result emerges from a very rough calculation that multiplies the number of confirmed cases at 1.4 million by a 10-fold factor of undiagnosed cases and infections. (The 10-fold factor is derived from data recently reported by Indiana University researchers.)

The upshot: The U.S. as a whole is not yet close to achieving even the speculatively low estimate of the herd immunity threshold.