Last night looked like a recipe for disaster as cities across the country instituted curfews to curb protests against police brutality and protesters showed no intent to comply. And, in some cities, disaster did come to bear, as cops and National Guardsmen fired tear gas and rubber bullets at peaceful crowds and looters struck again. But overall, Monday night's protests seemed to bring less police-on-protester (or press) violence and less looting and vandalism than did the previous few nights.

Throughout the day and early evening of Monday, the scene on American city streets was peaceful and subdued, as demonstrators exercised their First Amendment rights and police forces largely tried to stay out of their way. This continued apace in many areas as the night wore on—with some major exceptions.

The first comes courtesy of President Donald Trump, who decided to be bravely escorted by cops to a photo opportunity in front of a church after clearing out peaceful protesters with permission to be there by firing tear gas into the crowd.

Here's the moment where police fired teargas into a crowd of peaceful protesters in Lafayette Park, just minutes before Trump's address in the Rose Garden. pic.twitter.com/KPjxMKdDyx

Priests and clergy were also driven off "with tear gas and concussion grenades and police in full riot gear," said Gini Gerbasi, an Episcopal priest.

A priest was tear gassed and driven off church property to clear a path for the president to pose there, reports@GiniGerbasi, a priest at St. John's Episcopal Church in Georgetown DC: https://t.co/yismTGzDA4

"Under normal circumstances, Donald Trump crossing the street to hold up a Bible in front a church would be a cringeworthy photo-op. He didn't read from it. He didn't step in the church and pray. He just awkwardly modeled with a Bible. It was the crudest photo-op symbolism imaginable," writes Tim Carney at Washington Examiner. "In its full context, though, Trump's trip to St. John's–the church vandalized and partly burned by rioters on Sunday night–was worse."

A senior White House official told @Axios when they saw the tear gas clearing the crowd for Trump to walk to the church: "I've never been more ashamed. I'm really honestly disgusted. I'm sick to my stomach. And they're all celebrating it." @jonathanvswan https://t.co/X0D9huf9Y7

That was all before the D.C. curfew took effect at 7 p.m. 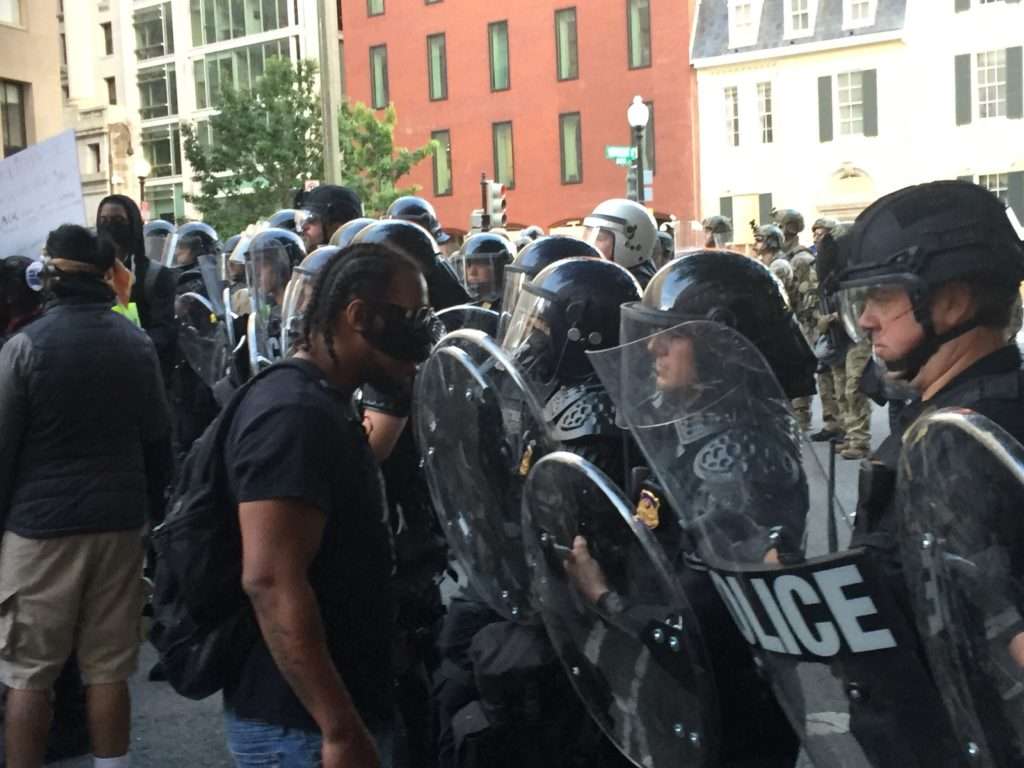 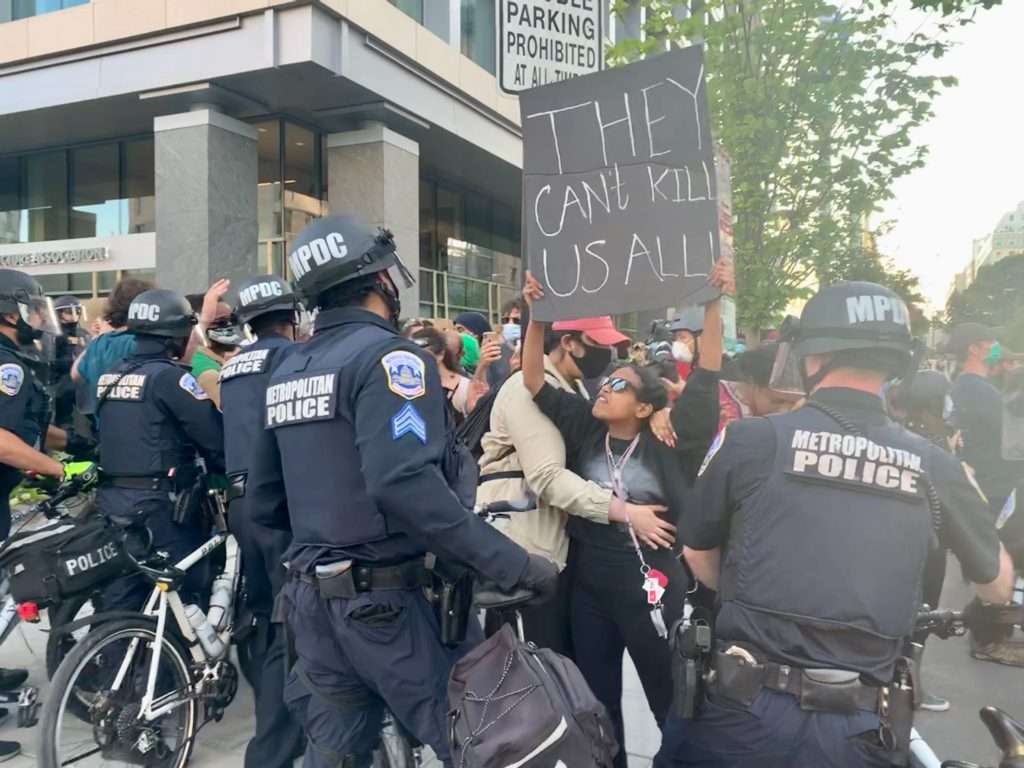 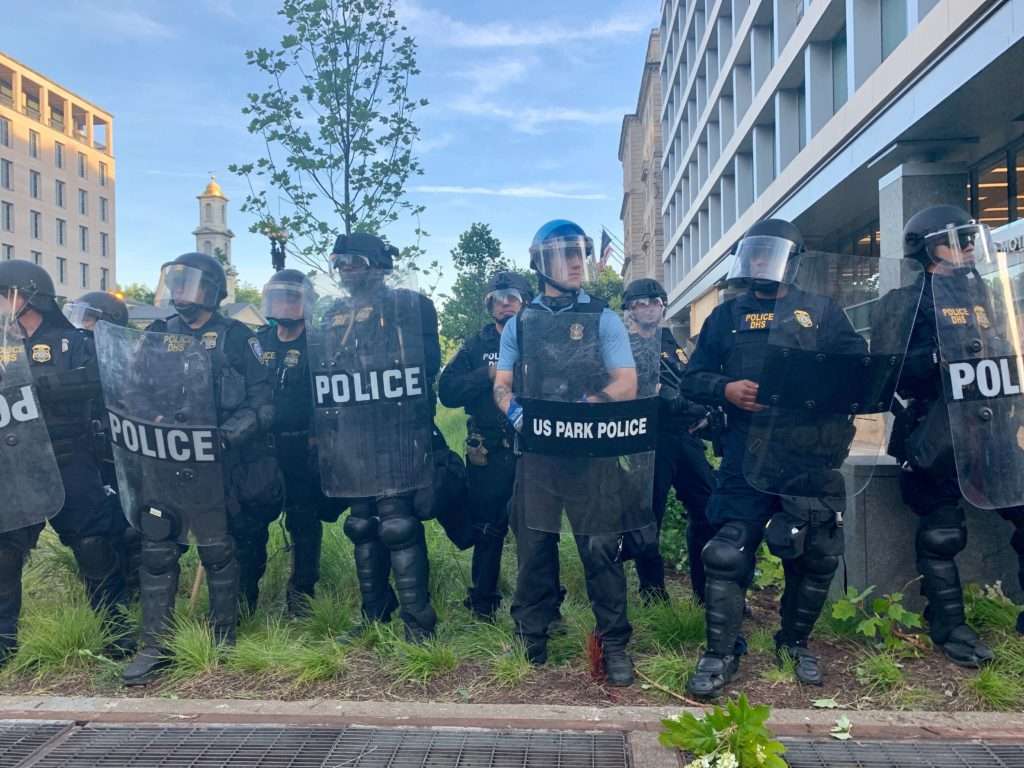 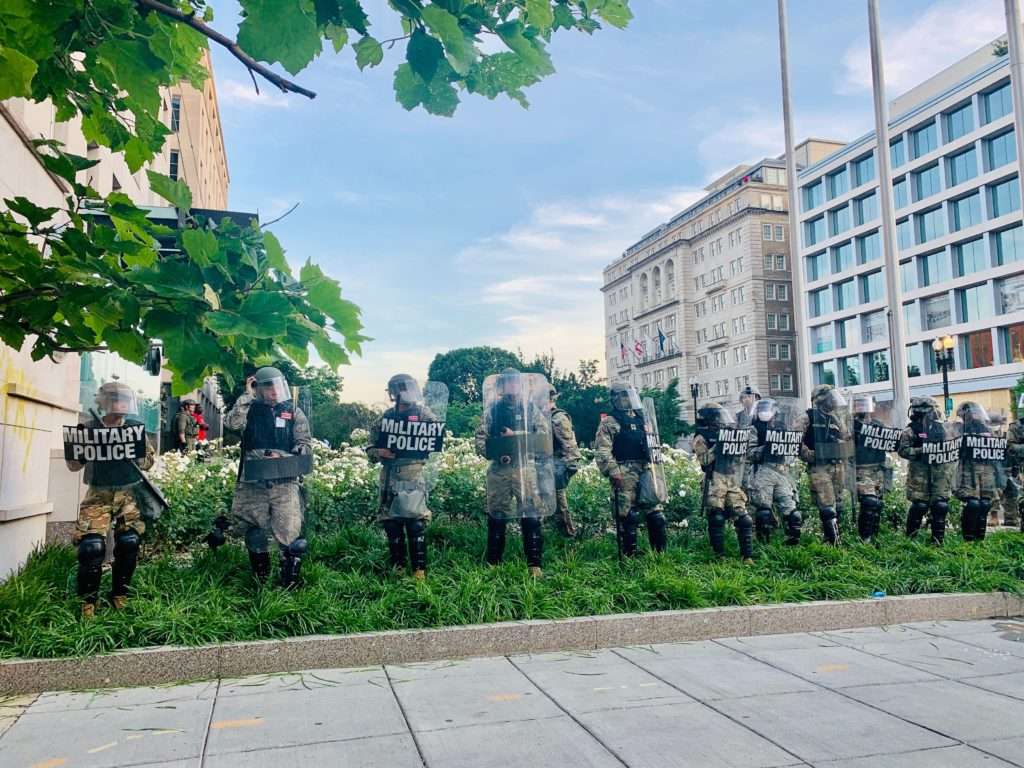 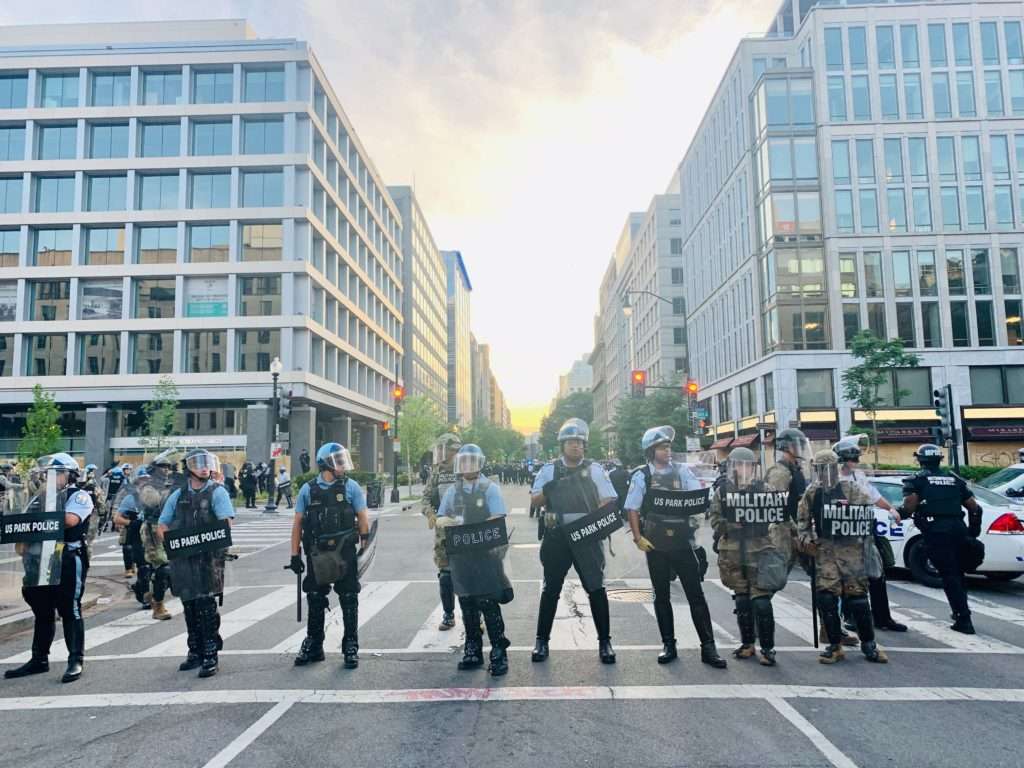 By a little after 8 p.m., law enforcement—a mix of D.C. Metropolitan Police, U.S. Park Police, and military police—had systematically driven everyone but about two dozen protesters out of the area.

Cops cordoned off into a small area on I Street, about a block north of the White House.

The remaining protesters sat down in the street and waited, holding some American flags and periodically chanting, as police led them out of the area one by one, tied their hands behind their backs, took their shoelaces, bagged up their belongings, and loaded them into police vans. A small gaggle of press was allowed on the sidewalk nearby.

"I love America! And I'm never gonna give up on it!" says man being handcuffed on the ground #DCProtests pic.twitter.com/cRvEAzrECd

The last of the D.C. sit-in group was loaded into vans a little after 9 p.m. 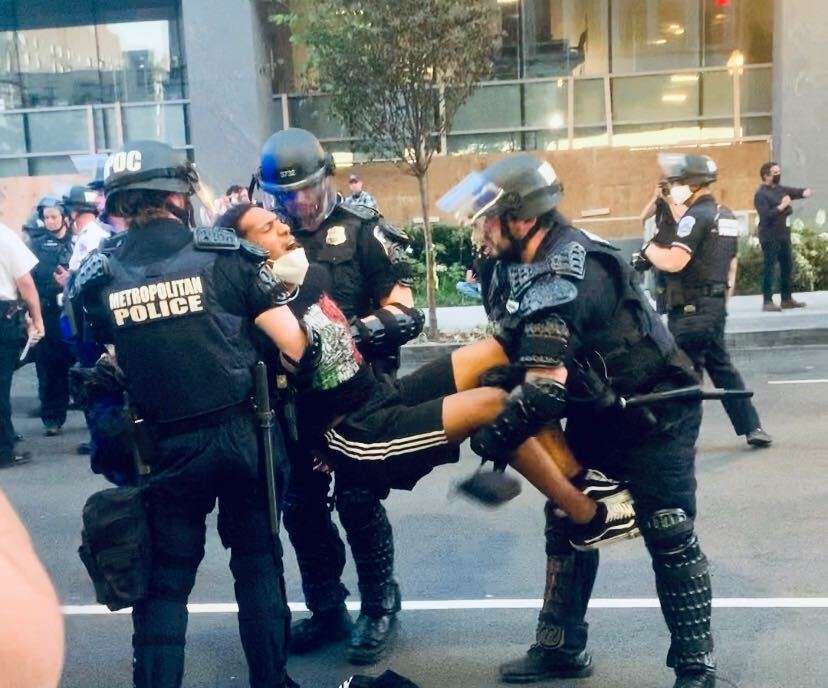 By this point, the bulk of the protest crowd had reconvened elsewhere.

protesters have now moved past Logan Circle and are marching south #DCProtests pic.twitter.com/QW6IuKst0S

Everything was calm, even as the group marched past federal agents and military vehicles stationed along the streets. 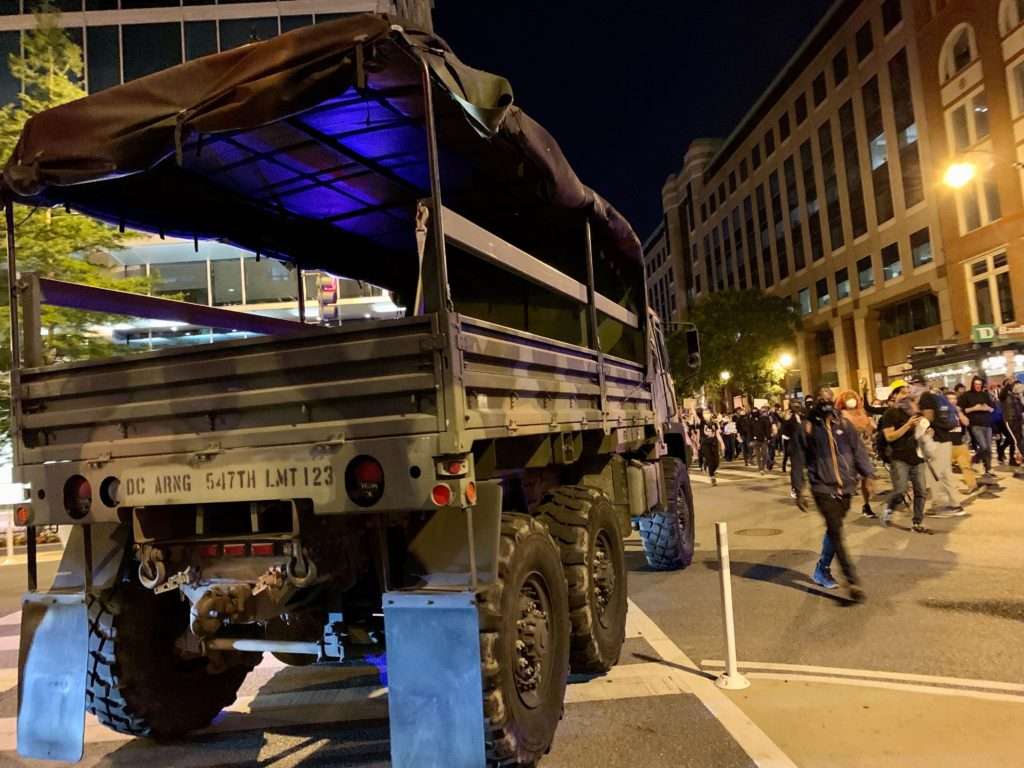 But as the crowd made its way through the restaurant- and shop-lined 7th St NW, a few windows were smashed in (I didn't see this directly, just the aftermath of glass strewn on the streets) and police cars with sirens on began driving up behind the group of marchers.

Then, a military helicopter appeared overhead to start its "show of force" routine. 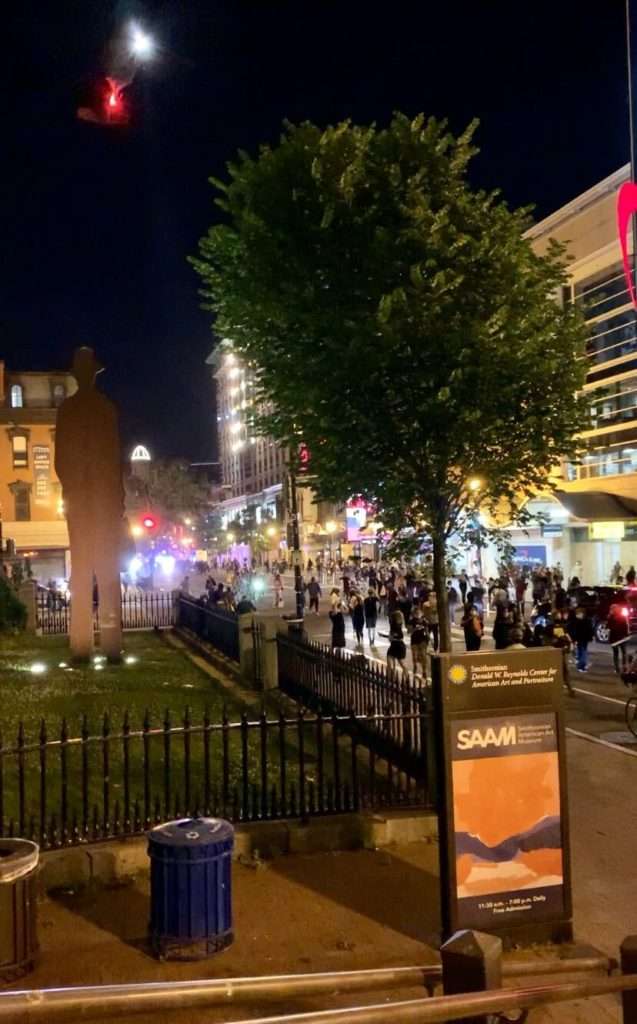 The helicopter hovered low above protesters marching down 7th Street near the Capital One Arena. It sent dust and dirt and sometimes other detritus whipping down the street, forcing protesters to shield their faces with their clothing or duck into doorways to avoid the debris.

As I ducked into one doorway, a plank of wood came flying from somewhere and landed at my feet.

It's nuts out in DC. This chopper was overhead about 40 feet for 20 minutes. No one budged. pic.twitter.com/gQUizbXHHR

The helicopter let up after a few minutes, and the crowd continued marching toward the federal courthouse at Judiciary Square, a few blocks away.

Then the military helicopter returned, hovering noisily over the crowd and sending strong winds and debris whipping by everyone once again. Many kneeled down, raised their hands or protest signs, while others stayed standing.

The bulk of the crowd didn't budge, as the helicopter did a couple of rounds of flyovers. About 20 minutes after it started, the helicopter finally let up and protesters continued marching. 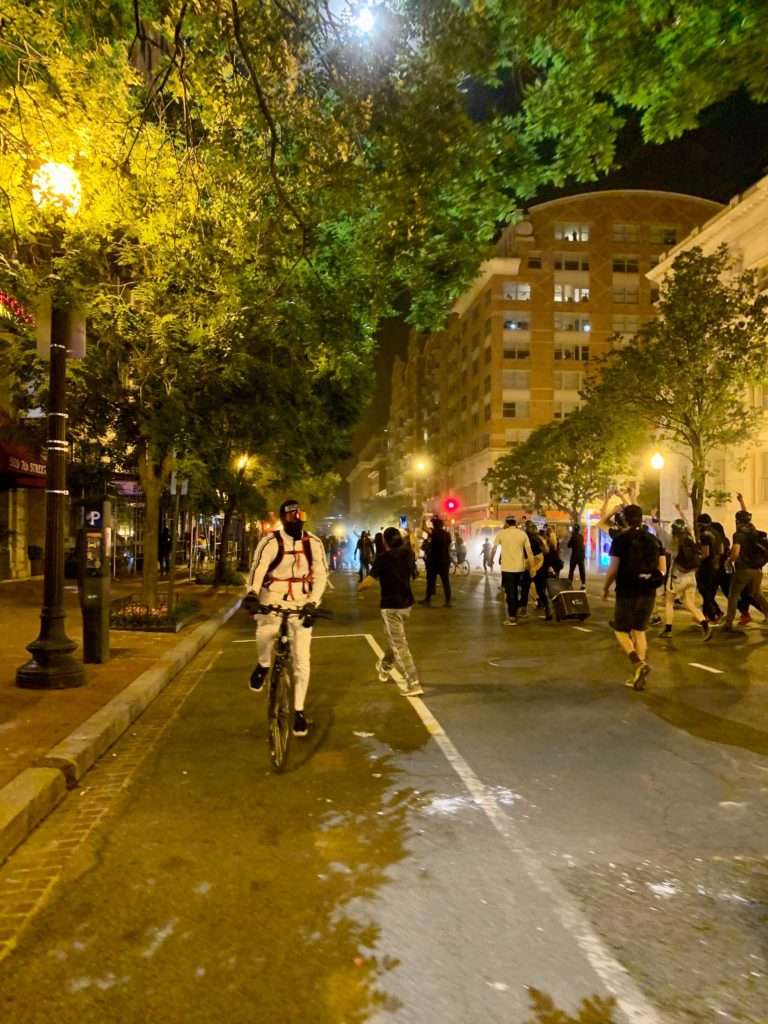 Another group of protesters, near the White House, was apparently chased north toward Swann Street NW, where police began arresting people. Several homeowners reportedly let protesters into their houses to avoid arrest. Some weren't able to leave until this morning.

In case you missed it: This Swann St homeowner in DC took in dozens of peaceful protesters fleeing arrest from the cops last night, shielding them from the police https://t.co/AWZI3at3Cl

Reflecting back on last night, the homeowners who took me & other complete strangers into their homes when police boxed protesters in on Swann St helped diffuse a potentially catastrophic violent event. I am now convinced they saved lives, including my own.

(More on the D.C. protests, from Reason's Christian Britschgi, here.)

Nonviolent protesters were also arrested Monday night in Oakland and Hollywood, California, in Dallas, in Atlanta, in New York City, and elsewhere.

This 24-year-old black man gives a moving speech to thank nonviolent protesters who are being arrested in Oakland tonight. Watch the whole thing to see how the police react. pic.twitter.com/zFQPZNgPVc

Police have surrounded the protesters on the Margaret Hunt Hill Bridge and are arresting everyone. @dallasnews pic.twitter.com/OtnOvPE6wl

This video of Grand Rapids PD firing a tear gas canister at an unarmed man (right after they maced him) point blank to the face needs to VIRAL. what in the actual fuck are these pigs doing pic.twitter.com/rmgC7lA8Bj

About 60 people were arrested in the Chicago suburb of Cicero last night, and two people were killed, according to the Associated Press. In Philadelphia, a shop owner fatally shot someone trying to loot their store.

And protests in St. Louis "started peacefully Monday" but "became violent overnight," A.P. reports. Four St. Louis police officers were reportedly taken to the hospital with non-life-threatening gunshot wounds; it's unclear how they were shot or by whom.

We have gas in Atlanta. Most of it is blowing back onto police. pic.twitter.com/ZOtbJKGe8S

But in Tennessee, "more than 60 National Guard troops put down their riot shields Monday evening at the request of peaceful protesters who had gathered in front of Tennessee's state Capitol in Nashville to honor George Floyd."

Police in some other places also managed to go light on mass arrests and tear gas, enabling protests to go down without major incident.

Intensity is picking up in downtown Las Vegas. The March is moving again. A sea of protest. pic.twitter.com/Gm0P6TdyKL

Police lights and humvees started rolling south on Chicago toward the intersection with 38th Street. Protestors rushed to the barricade they've erected to show defiance. LE then disappeared into the neighborhood, heightening tensions. But still peaceful here. pic.twitter.com/6WAqDRX0ba

All is quiet at George Floyd memorial. Dozens remain, sharing their stories. No police in sight. Looks like a good night here in Minneapolis. pic.twitter.com/iBQiQE3qxq

WOW. @LVMPD in tactical gear and shields on one side. #BlackLivesMatter protesters at the courthouse in #LasVegas on the other side. Lots of shouting. And then THIS. Handshakes shared between protesters & police. Amazing. @8NewsNow #8NN pic.twitter.com/xBuGaLFQGX

"we're showing them we're bigger than this (Wall St). It's not about rioting" pic.twitter.com/G1XnYhJzfH

In New York City, hours of peaceful protest were marred by some folks smashing windows or doors of shops like Macy's and Nike. "Video posted on social media showed some protesters arguing with people breaking windows, urging them to stop, but instances of vandalism and smash-and-grab thefts mounted as the night deepened," notes A.P.

On Monday, New York City announced that a curfew from 11 p.m. to 5 a.m. is in effect "every night … until it is lifted." Mayor Bill de Blasio has since said the curfew will actually start at 8 p.m. tonight.

• Violent enforcement of curfews will only perpetuate the cycle of police violence.

A private post-mortem examination found George Floyd's death was due to "homicide caused by asphyxia due to neck and back compression." The findings differs from the Hennepin County medical examiner's preliminary autopsy.https://t.co/N7trMPRSst

• Riots may be destructive, but abusive policing is tyranny, writes J.D. Tuccille.

Hearing a lot from @KamalaHarris tonight on the news during this horrible night. Make her the next Vice President.

• There's a bipartisan push in Congress to demilitarize the police.

Stitch Fix is laying off 1,400 people in California. A huge layoff.

They're also hiring 2,000 people in other areas of the United States?

That's not a layoff. That's moving a bunch of the company out of California. pic.twitter.com/QmetNm35sU