In what was one of the largest drug busts in U.S. history, federal authorities seized approximately 16.5 tons of cocaine—valued at more than $1 billion—from a ship in Philadelphia on Tuesday.

William M. McSwain, the U.S. attorney for the District Court of the Eastern District of Pennsylvania, celebrated the news on Twitter.

This is one of the largest drug seizures in United States history. This amount of cocaine could kill millions – MILLIONS – of people. My Office is committed to keeping our borders secure and streets safe from deadly narcotics. https://t.co/nWPfgpGqYa

Overdosing on cocaine is nothing short of a tragedy. But McSwain's implication—that "millions" were in jeopardy prior to the feds intervening—is not borne out by reliable data. According to the Centers for Disease Control and Prevention (CDC), cocaine overdose deaths amounted to a grand total of 13,942 in all of 2017: 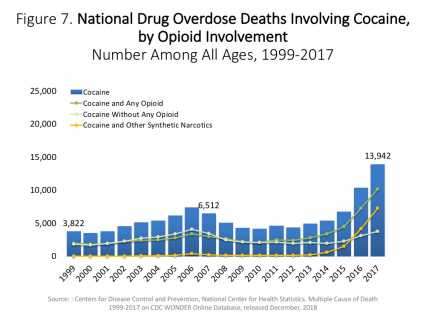 Of course, more than 16 tons of cocaine technically could kill millions, if used in excess. That's a big if, though, and it's one that isn't supported by trends around the drug. As Reason's Jacob Sullum points out in Forbes, research from neuropsychopharmacologist Carl Hart shows that even when crack—the smokable, more potent form of cocaine—reached one of its highest points of usage, addiction rates among all users hovered somewhere between 10 to 20 percent.

Despite the inaccuracy, McSwain's line of thinking is likely a common one, akin to the days of yesteryear when marijuana was associated with violent episodes of reefer madness.

But McSwain's assertions are not only uninformed—they're potentially dangerous. Sullum's work has also highlighted the pitfalls of prohibition, like the proliferation of laced alternatives used to strengthen weak, black market drug options. Particularly common among dealers is cocaine mixed with levamisole hydrochloride, an anti-parasitic drug popularly prescribed by veterinarians. In 2009, 70 percent of cocaine taken at the U.S.-Mexico border contained levamisole, which kills white blood cells and can leave people more vulnerable to infection.

In any case, the CDC's cocaine fatality figures fall quite short of the "MILLIONS" McSwain says the drug will kill—a sentiment that's surely grounded in hysteria, rather than reality.

Instacart Fires 10 Workers Who Voted To Unionize and Around 1,990 Others

It's Not Just Trump. California Labor Unions Are Trying To Reverse the Outcome of an Election Too.

The Magical Genius of Peter Huber

Jesse Walker | From the February 2021 issue

Will Democrats Embrace the Imperial Presidency Now That Their Guy Is in Charge?

Partisans who abandon constitutional principles because they prove inconvenient are in for a rude surprise when the other team wins.

D.C.'s Unscientific Vaccination Plan Pits the Elderly Against the Obese

Even as the district struggles to vaccinate seniors, it will soon allow half the city to get in line.

The president could form a sizable splinter party if he's serious, but GOP defectors would have major ballot-access issues. Might they take over a smaller party instead?

A Letter From a Florida Inmate Asked for Help. It Arrived Too Late.

Theresa Mathis was in the middle of a 25-year mandatory minimum sentence when she sent Reason a letter asking for help.

What Amy Coney Barrett Got Wrong About Lochner

Justice Barrett should revisit her views on this wrongly maligned case.