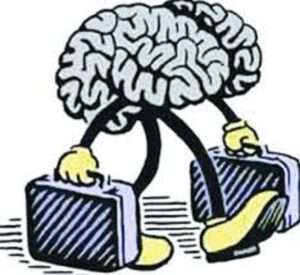 Since the Supreme Court overruled Roe v. Wade in its decision in  Dobbs v. Jackson Women's Health Organization, some commentators have predicted there will be a "brain drain" of highly educated professionals from states that enact or reinstate laws severely restricting abortion. LA Times columnist Michael Hiltzik and The Scientist  have published articles predicting a general brain drain away from states with restrictive abortion laws. The Washington Post  has an article positing a brain drain of doctors, while Scientific American has one focused on Ob-Gyns. The "brain drain" theory is distinct from—though related to—the idea that people generally will "vote with their feet" for pro-choice jurisdictions. Highly educated professionals might migrate en masse even if few other people do—or vice versa.

Will such a brain drain actually occur? At this point, we don't really know the answer. Less than two months have passed since Dobbs. If it happens, any significant abortion-driven brain drain will probably take many months—or even years—to pick up steam. The articles linked above all rely on a handful of anecdotes rather than systematic data. And even those anecdotes are mostly cases of people saying they might move away from a red state, or turn down an opportunity there—not cases of people actually doing so. That's understandable. Not enough time has passed for us to get any kind of definitive answer. In addition, thanks to Roe v. Wade, there is no modern precedent for the kinds of highly restrictive abortion bans now in force in some red states.

Nonetheless, I think we can do some informed speculation. My tentative view—as a longtime student of foot voting—is that abortion bans, as such, will lead to only a modest brain drain, at most. But some collateral effects of anti-abortion laws could cause a bigger one. It might be bigger still if pro-choice blue states take steps to make themselves more attractive to potential migrants.

The biggest reason why I am skeptical that abortion restrictions, taken in isolation, will cause a large brain drain is that most highly educated women are unlikely to ever get an abortion, and many of those who might need one can potentially avail themselves of various substitutes for getting one in-state. In recent years, abortion has been overwhelmingly concentrated among relatively poor women. Moreover, as discussed in my previous post on abortion and foot voting, contraception, mail-order "medication abortions," and getting an abortion out of state are all potential substitutes for for getting an abortion at a medical facility close to home. Each of these is likely to be more easily accessible to relatively affluent professionals than to the poor.

Some red states may try to ban medication abortions or even out-of-state travel to get an abortion. But the former is likely to be extremely hard to police, while laws forbidding the latter are likely to be struck down by the courts—a position endorsed by key Supreme Court swing-voter Justice Brett Kavanaugh. There are at least three strong constitutional arguments against such laws, and courts need only endorse one of these theories for plaintiffs to prevail.

I don't claim these options will be adequate alternatives to in-state abortion rights for all highly educated women in all conceivable circumstances. But they are likely to work for a great many, the vast majority of the time. Combined with the low rate of abortion among the high-income professionals to begin with, that suggests any abortion-related brain drain is likely to be modest in scale.

It's also important to consider the tradeoffs would-be migrants face between abortion rights and other priorities. In recent years, relatively red states like Florida and Texas have had the biggest net population gains from interstate migration. Why? It's not because foot voters love abortion restrictions specifically, or the Republican Party generally. It's primarily because these states offer job opportunities, low taxes, and relatively low housing costs (the latter primarily because they have comparatively few restrictions on building new housing in response to demand). By contrast,the big blue states of New York, Illinois, and California, have been among the biggest net losers. Housing costs and taxes are likely culprits for this trend.

Faced with a tradeoff between abortion rights on the one hand and housing and tax costs on the other, a large majority of highly educated professionals might well choose the latter. The likelihood they or their family members will need an abortion is low, which taxes and housing costs are far harder to avoid. If they do end up needing an abortion, the money saved on housing and taxes could potentially pay for an out-of-state abortion several times over.

To avoid misunderstanding, I should emphasize that I am not opposed to abortion rights. Much the contrary! I think almost all abortions should be legal, and I support the "my body, my choice" principle more comprehensively than even most other pro-choice advocates do. And I particularly abhor Texas' awful SB 8 abortion law. My point here is that, for most of the highly educated people who might cause a brain drain, abortion rights will often be outweighed by other considerations in deciding where to live and work.

Perhaps, however, this kind of cost-benefit approach is the wrong way to look at potential foot-voting choices. Maybe "brains" will shun states with abortion restrictions out of moral and ideological considerations, even if those restrictions have little or no tangible effect on their lives. Perhaps that will indeed happen! But I am skeptical.

Historically, foot voting -at least the kind that takes the form of interstate moves – is usually driven by issues with a significant tangible effect on the lives of the mover and his or her family: taxation, housing costs, job opportunities, widespread discrimination against his or her group, and so on. By contrast, people rarely move to another state merely because of policies they oppose or support for ideological reasons, even though they have little tangible effect on them. It's hard to think of even one significant historical example where these kinds of preferences resulted in large-scale migration.

Symbolic ideological issues can drive less significant forms of foot voting. For example, people with strong feelings on the issue may patronize businesses they see as taking the right stand on the issue (especially if their products are not inferior in price/quality to the competition). But few people make interstate moves because of them, even if they sometimes talk about doing so.

Such talk strikes me as similar to people who say they will move to Canada to protest the election of a GOP president they hate. Only a small percentage of those who say such things ever act on it. Even the election of Trump in 2016 caused only a small ripple of such moves (an increase of only about 1000-2000 per year, at most, which is very small relative to the total population of the US).

By contrast, oppressive policies with large tangible impact on the lives of would-be migrants have at times caused waves of migration to Canada: the persecution of Loyalists after the Revolutionary War (which led to a large migration, relative to the population size at the time), slaves fleeing the Fugitive Slave Acts before the Civil War, and men fleeing the Vietnam-era draft (some 125,000 in all).

Brain drain might be more likely to take the form of people choosing not to move to anti-abortion states in the first place, rather than leaving after previously living there. Young professionals who turn down jobs in Texas or Florida face fewer costs in doing so than people with long-established careers in those states. But if the former type of decision still requires people to turn down opportunities with better pay and benefits—and lower housing and tax costs—it's still a big sacrifice for the sake of abstract principle. Some "brains" might make it. But I am skeptical that many will.

While abortion bans, as such, seem unlikely to lead to a major red-state brain drain, the collateral side-effects of abortion restrictions might be a different story. Some experts predict that state abortion bans might also have the effect of banning IVF fertility treatments. Others contend these laws will interfere with access to a variety of medical treatment for diseases such as arthritis and cancer. The percentage of highly educated professionals who need IVF services or these kinds of medical treatments is likely far larger than the percentage who are likely to need abortions. And, unlike abortion, these kinds of treatments often cannot be secured through one or a few trips out of state, because—among other things—they usually require ongoing supervision by medical professionals.

The same thing may be true of claims that abortion restrictions will interfere with the practices of doctors enough to incentivize some of them to move. Even if most professionals remain largely unaffected by abortion laws, doctors who specialize in relevant fields might experience much greater effects.

I lack the scientific and medical expertise to gauge the full potential extent of these side-effects. If they are smart and competent, anti-abortion state legislatures will carefully draft abortion laws in ways that protect IVF and various medical treatments. But, when it comes to politics, intelligence and competence are often in short supply! The War on Drugs has had some immensely harmful collateral effects, such as undermining medical treatment for chronic pain. Red states' War on Abortion could turn out the same way, even if most pro-lifers don't intend such a result.

A bigger abortion brain drain might also develop if pro-choice blue states adopt policies that make them more enticing to migrants. If they cut back on high taxes and zoning restrictions that inflate housing prices, they might attract many more migrants from red states.

For that reason, among others, pro-choice blue states should become pro-YIMBY. If California could offer people Texas-like housing costs and tax rates, plus also abortion rights, that's a combination many would find hard to resist! That would be true not only of relatively affluent brains, but also of the less affluent people most likely to need abortions.

The above analysis implicitly assumes that abortion regulation will remain largely under the control of the states. That may be the most likely scenario. But it is far from certain. Both Democrats and Republicans have proposals for federal abortion laws; nationwide bans on at least some types of abortion and nationwide preemption of state abortion restrictions, respectively. Whether such federal laws get enacted—and if so, whether courts will uphold them—remains to be seen.