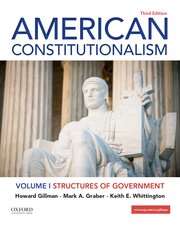 The first edition of Howard Gillman, Mark A. Graber, and Keith E. Whittington's American Constitutionalism was published by Oxford University Press in 2012. Both volumes of the casebook are now in their third edition, and there is also a one-volume version that includes materials on both structures of government and rights and liberties.

We always had more material than could fit between the covers, and we wanted to produce new materials as events warranted. OUP agreed to produce a companion website that would host those materials. Even more generously, OUP agreed to make that companion website freely available to the public. The classic version can be found here, and the new version can be found here. All materials will eventually migrate to the new version.

The companion website has hundreds of primary documents relating to American constitutionalism. Each document is edited and includes an explanatory introduction. An index to the materials can be found here.

In part because some materials did not get uploaded last year, and in part because  American constitutionalism has been rather tumultuous of late, we are adding well over 150 new documents to the site this summer. An index of the 2022 update can be found here. Those materials include not only the major constitutional (and constitution-adjacent) cases of the just concluded term of the U.S. Supreme Court, but also myriad federal circuit court and state court decisions, non-judicial documents (relating to January 6th, the Trump impeachments, and more), and older documents relevant to better understanding current controversies (e.g., old and new OLC opinions on delays in inducting judges into office, cases on government pressure on private actors to suppress speech, an OLC opinion on whether former presidents can be indicted for the same offense for which they were impeached, cases on free exercise claims against vaccination requirements, cases on state restrictions on the right to travel across state lines).

A constitutional law class could easily be taught just using the open source materials on the companion website (and I have), but OUP only supports the website because of sales of the casebook so feel free to buy and/or adopt it.