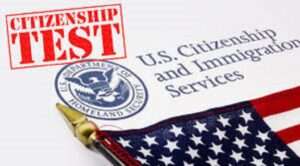 On Monday, the Biden administration revoked changes to the citizenship test for immigrants that were adopted in the waning days of the Trump administration. The official announcement from US Citizenship and Immigration Services is here. With the exception of a few test administrations over the next few weeks (where some applicants will have the option of taking either the new or old versions of the test, in order to accommodate those who studied for the 2020 version on the expectation that it would be the one they would have to pass), USCIS is going to revert to the 2008 version that the Trump administration tried to supplant.

As I explained in this December post on the Trump revision, some of the changes made by the former administration were reasonable, including increasing the number of questions from ten to twenty, and eliminating some questions focusing on geography, while adding more about history, law, and political institutions. The latter types of knowledge are more useful for purposes of being an informed voter, which is presumably the purpose of the test in the first place. But the Trump administration also introduced many new questions that incorporated factual errors, smuggled in disputable normative assumptions in the guise of factual knowledge, or some combination of both. I went over examples of both problems in my December post.

On balance, it would have been better if the Biden administration had kept the defensible aspects of the Trump reforms, while getting rid of the biased and inaccurate questions. But if we can only have one of the two, I would say it is better to get rid of the latter, even at the cost of also junking the former. Including questions based on factual errors and disputable normative assumptions is both counterproductive and egregiously unfair, in so far as it punishes applicants who know enough to realize that the official "correct" answers are actually wrong, or who just happen to disagree with the normative assumptions behind the nonfactual questions. But, as noted in my earlier post, some of the questions on the 2008 version of the test also have significant flaws. So far at least, the new administration has not tried to fix them.

Regardless of which version of the test is used, neither Trump reform nor the Biden reversal of it address some of the deeper issues raised by the use of tests to screen applicants for the citizenship. I discuss some of them in my earlier post:

Unlike the right to live and work in a given location, the right to vote is not just a personal liberty, but also, as John Stuart Mill put it, the right to exercise "power over others." Thus, there is some potential justification for restricting the franchise to those with at least a minimal level of political knowledge. That is, at least in theory, what the citizenship test is supposed to do. And it is also the reason why we deny the suffrage to children, among others….

But that, in turn raises the question of why it should be imposed on immigrants, but not native-born citizens. One possible answer is that we can reasonably assume that natives already know these things. But, sadly, that isn't true. Studies show that almost two-thirds of current American citizens would fail even the old citizenship test if they had to take it without studying….

Perhaps the answer is that voting is an inherent right of citizenship, so all citizens should be given the franchise, regardless of how ignorant they might be about politics and government. But this runs into the fact that we already deny the franchise to large numbers of citizens based on their real or imagined lack of competence to be good voters: children, many of the mentally ill, and numerous convicted felons. In combination, these groups add up to a third or more of the population. If it is morally permissible to deny the franchise to incompetent (or supposedly incompetent) children, mentally ill people, immigrants, and felons, why not to ignorant native-born adults?…

Discrimination between politically ignorant immigrants and similarly ignorant natives is another example of morally arbitrary discrimination based on parentage and place of birth, on which most immigration restrictions are based. Why not just impose a knowledge test that applies to all would-be voters regardless of whether they are immigrants or natives, children or adults, mentally ill or not?….

One possible answer to this question is that we cannot trust the government to come up with an objective test, as opposed to one calculated to weed out opponents of the party in power. This problem is already evident in some of the Trump administration test questions discussed above, which seem designed to privilege more conservative answers to questions (such as the one about who members of Congress represent). The incentive for the government to "rig" the test would be even greater if it applied to all potential voters, not just immigrants.  The history of voting tests is not a happy one; it includes, for example, "literacy tests" used to weed out black voters in the Jim Crow-era South. This is the main reason why I am skeptical of adopting knowledge tests as a general solution to the problem of political ignorance….

I discuss a variety of issues related to immigrant voting rights in greater detail in Chapters 5 and 6 of my recent book Free to Move: Foot Voting, Migration, and Political Freedom.