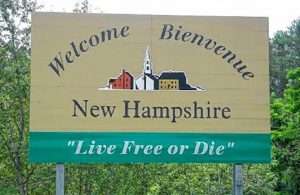 When the Supreme Court rejected Texas' lawsuit seeking to overturn the election results in Pennsylvania and other swing states last month, many people probably thought we have heard the last of the Supreme Court's "original jurisdiction" over cases filed by one state against another, for a long time to come. But there is in fact another such case on the Court's docket: New Hampshire v. Massachusetts. Like Texas, New Hampshire filed its case directly in the Supreme Court, because the Constitution gives that court original jurisdiction over cases filed by one state against another. Unlike the "Texas Turkey," this case has some real merit, and also has important implications for the future of American federalism. If not for commentators' focus on more dramatic recent events, the case would have attracted a lot more attention than it has so far.

Boston Globe columnist Jeff Jacoby, has a helpful summary of how the case came about:

What about a New Hampshire resident who used to commute to Massachusetts?

Until last spring, that was the law…

Then came the pandemic. Massachusetts declared an emergency and ordered non-essential workplaces to close. Many of the 84,000 New Hampshire residents who had been commuting to jobs in the Bay State switched to working from home. Under the rule that had been in place for decades, Massachusetts could no longer tax their income.

So it invented a new rule.

Not surprisingly, New Hampshire strenuously objected to its neighbor's unprecedented tax grab. When Massachusetts refused to reconsider, New Hampshire turned to the Supreme Court, which adjudicates lawsuits between states. The justices are expected to decide this month whether to take the case.

While the new Massachusetts regulation is supposed to be only an "emergency" measure, the state has repeatedly extended it. Moreover, instead of helping to combat the Covid pandemic, the Massachusetts regulation actually exacerbates it, by increasing the cost of working from home (which state authorities otherwise encourage because it reduces the risk of spreading the disease). The state could just as easily claim it is fighting the pandemic by imposing a tax on home food deliveries to New Hampshire residents who used to dine out at restaurants in Massachusetts (thereby enabling the state to regain some of its normal pre-pandemic restaurant tax revenue), or on the use of home Wi-Fi systems by New Hampshire workers who previously used networks in offices located in Massachusetts.

New Hampshire's  motion for leave to a file a complaint in the Supreme Court outlines two theories as to why the Massachusetts rule is unconstitutional: it violates the Dormant Commerce Clause (which prevents states from regulating and taxing economic activity beyond their borders), and the Due Process Clause of the Fourteenth Amendment, which has long been held to bar state taxation of people who neither live nor work within its borders. Both arguments build on one of the bedrock principles of American federalism: that state sovereignty is territorial in nature. States do not have the power to regulate and tax activity beyond their borders.

In its reply, Massachusetts relies heavily on the argument that the new tax rule is just an "emergency" measure limited to preserving the pre-crisis taxation status quo, and thus does not unduly burden interstate commerce, violate the Due Process Clause, or invade New Hampshire's sovereign interests. This argument strike me as problematic, since there is no special emergency exception to the Dormant Commerce Clause, the territoral aspets of the Due Process Clause, or the general ban on states' ability to regulate and tax beyond their borders. Moreover, as already noted, the Massachusetts' new tax rule actually exacerbates the spread of Covid at the margin, by making it more costly for New Hampshire residents employed by Massachusetts firms to work at home.

Ultimately, most of Massachusetts' arguments rely on the notion that the NH workers in question have close connections to the Massachusetts economy and benefit from interacting with it . Therefore the state claims it has a right to keep taxing them as before. For example, Massachusetts points out that it "supports major urban centers that offer employment opportunities and wages on a scale not generally available elsewhere."

Much the same reasoning would justify allowing Massachusetts to tax the income of any employees of Massachusetts businesses, regardless whether those workers have every physically worked in the state or not – indeed, regardless of whether they had even set foot there at any time in their lives. And the logic is not limited to direct employees. After all, independent contractors hired by Massachusetts firms, but doing their work in other states, also sometimes benefit from "employment opportunities" affected by Massachusetts' state policies.

As New Hampshire points out in its filing, remote employees who never come to the state seeking to tax them do not use state public services or burden its infrastructure. This undercuts the main standard traditional rationales for taxing out-of-state residents. They are also not eligible for Massachusetts welfare state programs, and the state has every right to continue excluding non-residents from them. I would add that attempting to tax such workers is a blatant example of "taxation without representation," since remote workers obviously do not have the right to vote in Massachusetts state elections.

If Massachusetts prevails on the merits, it could potentially have dire implication for the growing number of people who work as remote employees for firms located in another state. The latter state could tax their income even if they never set foot there. This would also make it much harder for people to "vote with their feet" for states with lower taxes, better public policies, and other advantages. If they try to do so, their former home state could try to keep right on taxing them if they are still employed by the same firm. For reasons noted above, under Massachusetts' logic, it might even do so if they work as independent contractors rather than direct employees.

Massachusetts also argues, at length, that New Hampshire lacks "standing" to file this case because the taxes in question only burden individual New Hampshire residents, not the state itself. To my mind, New Hampshire's response on this point is compelling. It argues that Massachusetts' extraterritorial taxation of its residents necessarily invades New Hampshire's exclusive sovereignty to tax activity within its borders, and reduces the pool of income available for NH itself to tax.

However, the issue of state government standing is a murky one, on which existing precedent is far from a model of clarity. The Supreme Court recently dismissed two important cases filed by state government on standing grounds: the "Texas Turkey" and Trump v. New York (the case where various blue state and local governments challenged Trump's ultimately abortive effort to exclude undocumented immigrants from apportionment counts determining the allocation of representatives between states).

To my mind, New Hampshire v. Massachusetts is easily distinguishable from these two cases because the harm to New Hampshire is much clearer and more direct than in Texas v. Pennsylvania (where there was no real harm to the plaintiff state at all, other than dissatisfaction about the defeat of their preferred candidate in the election) and much more certain than in Trump v. New York (where the Supreme Court denied standing because it was unclear whether the Trump Administration would actually manage to get the data needed to exclude any significant number of undocumented immigrants from the apportionment counts).

However, a majority of justices could potentially decide the standing issue against New Hampshire nonetheless. Standing doctrine is a morass of contradictions generally, and state government standing is arguably an even bigger cesspool than the rest. I wish the Supreme Court would just drain this swamp by abolishing the doctrine of standing entirely. But that isn't going to happen anytime soon.

While New Hampshire v. Massachusetts hasn't attracted much public attention, it has already generated a number of notable amicus briefs supporting New Hampshire. Four states (three "blue" and one "red") – New Jersey, Connecticut, Hawaii, and Iowa, have filed an excellent brief supporting New Hampshire's position on the merits. Not coincidentally, all four have many residents who work remotely for out-of-state firms.

A coalition of ten red states led by Ohio have filed an amicus brief arguing that the Supreme Court cannot refuse to hear "original jurisdiction" state vs. state cases, but must consider them on the merits. The Ohio brief builds on an argument previously defended by Justices Clarence Thomas and Samuel Alito in Nebraska v. Colorado and (a few days after the brief was filed) Texas v. Pennsylvania. I think the Thomas-Alito position has a lot of merit. But seven of nine Supreme Court justices recently rejected it in the Texas case, and I highly doubt they are going to reconsider the issue so soon.

Another brief supporting New Hampshire was filed by prominent tax law scholar Edward Zelinsky. As he describes in his brief, Prof. Zelinsky is a professor at Cardozo Law School in New York City, and also "a Connecticut resident who works from home on a majority of his work days, doing legal re-search and writing." He has, in a previous case, "challenged New York's taxation of his Cardozo salary paid to him for his remote work days in Connecticut."

Assuming it does not adopt the Thomas-Alito position on original jurisdiction, the Supreme Court has many options in this case. It could simply refuse leave to file a complaint, as was done in both Nebraska and Texas, perhaps coupled with a brief statement indicating that New Hampshire lacks standing (if they in fact conclude that is the case). Alternatively, the Court grant leave to file, and issue a more detailed opinion on standing and on the merits (if it concludes NH does in fact have standing). The justices could also grant leave to file and schedule the case for a full oral argument, thereby giving it the level of consideration a case of this magnitude normally deserves.

I hope – and very tentatively expect – that they will choose the latter option. The "Live Free or Die State" deserves to win this important case. At the very least, it is no Texas Turkey that can be lightly dismissed.

We could learn what the Supreme Court intends to do with the case, as early as next Monday. Stay tuned!