A new report released yesterday, by Richard Rosenfeld and Ernesto Lopez for the Council on Criminal Justice (CCJ), contains disturbing quantification of what has been reported anecdotally by media: Homicides have increased significantly in many cities across the country since late May.  And the pattern across other crime categories documented in the report suggests that a "Minneapolis effect" -- a reduction in policing similar to the "Ferguson effect" -- may well be the cause for the recent spike in homicides. 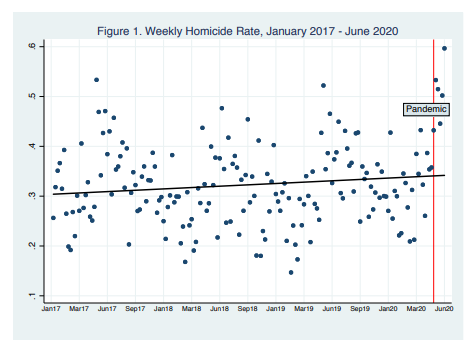 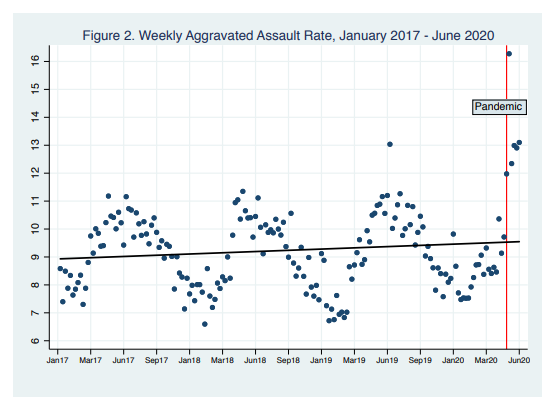 What is noteworthy about the post-late-May spikes in homicides and aggravated assaults is that this same pattern does not appear for all other kinds of crimes. The report looked at nine other crime categories - gun assault (a subset of aggravated assault), domestic violence, robbery, burglary (and also the subsets of commercial and residential burglary), larceny, motor vehicle theft, and drug offenses. None of the other crime categories exhibited a structural break starting in late May. Burglaries, for example, abruptly increased (by 190%) at the end of May and then equally abruptly returned to normal levels in the next week. A dramatic increase in commercial burglaries in the week that coincided with the mass protests following the George Floyd killing explains this pattern.

I have previously blogged about a recent and similar pattern in crime increases in Minneapolis. In that city, shooting crimes (including homicides) increased after the police killing of George Floyd in late May - but other crimes did not. A key part of the explanation appears to be that Minneapolis police stopped making as many street stops as they made previously. And given the unique responsiveness of gun crimes (such as homicides) to police activity, the result of the reduction in Minneapolis appears to have been a sharp increase in gun violence. At least 275 people have been the victims of gun crimes in Minneapolis during the first seven months of this year, surpassing the entire annual totals of all but two of the past ten years.

The de-policing hypothesis appears to be a better fit with the data than the de-legitimizing hypothesis. If law enforcement has become generally de-legitimized, the result should be a general increase in all crime categories, including (for example) burglaries. But that is not the pattern that the data exhibit. The recent data reflect an increase in homicides and other gun-related crimes but not other crimes -- a unique pattern that is more consistent with de-policing being the cause.

Researchers should continue to investigate why homicides have been spiking in Chicago and other major cities across the country. If the answer is that de-policing is linked to rising gun violence (as some earlier studies would suggest), further limiting police efforts to aggressively deter gun crimes will tragically lead to more shootings and more homicides. And the victims of those crimes will likely come disproportionately from African-American communities - communities that, in some instances, may want more aggressive police efforts to combat gun crimes.

The FDA Completely Botched Its Response to the Baby Formula Shortage