Marijuana possession and distribution is illegal under federal law.  Nonetheless, a majority of states have legalized medical marijuana to some degree, and several more states have legalized marijuana possession and use for even recreational purposes. As a practical matter, this means individuals are able to possess and use marijuana without significant fear of prosecution throughout much of the United States. Yet the federal prohibition still influences business decisions related to marijuana as the specter of federal action remains.

Next month, the Brookings Institution will publish my new book, Marijuana Federalism: Uncle Sam and Mary Jane, an edited volume exploring the implications of the conflict between federal and state marijuana laws, and suggesting how the proper reforms could harness federalism to produce better marijuana policy.

As I explain in the introduction,  even though the Justice Department has not sought to preempt or displace state-level reforms, the federal prohibition casts a long shadow across state-level legalization efforts. This federal-state conflict presents multiple important and challenging policy questions that often get overlooked in policy debates over whether to legalize marijuana for medical or recreational purposes. Yet in a "compound republic" like the United States, this federal-state conflict is particularly important if one wishes to understand marijuana law and policy today. 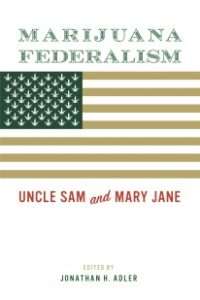 The book's introduction, "Our Federalism on Drugs," is available on SSRN. The book itself may be ordered through Amazon.

Here's a listing of the other chapters:

3. The Smoke Next Time: Nullification, Commandeering, and the Future of Marijuana Regulation - Ernest A. Young

Drug Shortages? Ham-Handed Pandemic Interventions Deserve Much of the Blame