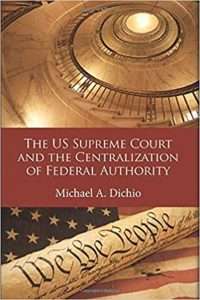 Publius: The Journal of Federalism recently published my review of political scientist Michael Dichio's important new book The US Supreme Court and the Centralization of Federal Authority. Although I have some disagreements (detailed in my review), this is an impressive work, and I highly recommend it to anyone interested in the subject. My review is available for free on SSRN. Here's the abstract:

Does the U.S. Supreme Court protect the states from the expansion of federal authority? In this important new book, political scientist Michael Dichio argues that the answer is "no." To the contrary, he contends that, throughout American history, "the Court …. has persistently acted as an important instrument of the broader central state, expanding federal authority over society." The theory that the Supreme Court expands federal power at the expense of the states is not a new idea, having been first raised by anti-Federalist critics of the Constitution over 200 years ago. But Dichio provides the most thorough and wide-ranging defense of it to date, drawing on an extensive database of notable Supreme Court decisions from 1789 through 1997. Among other things, he shows that the Court constrained the states in important ways even in historical periods that are often thought of as high points for "states' rights," such as the Jacksonian era and the late nineteenth century.

Dichio's analysis is, in many ways, compelling, and is a major contribution to the literature on federalism and judicial review. But some of his methodological choices overstate the centralizing tendencies of the Supreme Court. He also unduly downplays some key ways in which the Court promotes decentralization of power. While the Supreme Court has never been a consistent ally of state governments seeking to limit federal authority, it is also not quite as consistent a centralizing force as Dichio suggests.

The final published version is available here, albeit behind a gate (the final version differs very little from the SSRN version, except in format and pagination).

I previously wrote about this issue in a 2017 book chapter, published in Nicholas Aroney and John Kincaid, eds., Courts in Federal Countries: Federalists or Unitarists?,  (University of Toronto Press). My conclusions are similar to Dichio's on several key points. But Dichio covers a wider range of cases and historical periods than I did. There is some disagreement on such questions as how to assess federal judicial decisions that protect individual rights against state and local governments, and also whether it is appropriate to classify decisions where the Supreme Court upholds federal laws against constitutional challenges as cases where the Court promoted expansion of federal power (as opposed to merely refused to try to limit it). In my view, discussed in both the 2017 chapter and in my review of Dichio's book, many judicial decisions protecting individual rights against state and local authorities have a significant decentralizing aspect, because they empower individuals and civil society.

The debate over the relationship between federalism and judicial review will no doubt continue. But Dichio's book does much to increase our knowledge of this crucial subject.

It is perhaps worth noting that the book is endorsed by Volokh Conspiracy co-blogger Keith Whittington, who writes that "Dichio takes a fairly unique approach to thinking about the relationship between the US Supreme Court and the development of the American state. Scholars interested in American political development and historical work on the law and the courts should grapple with the evidence on offer here."You can't go wrong with a book backed by two different VC bloggers!