Reason is supported by:
Polina Osherov 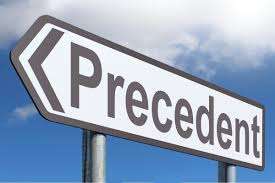 Recent developments at the Supreme Court have helped kick off a new debate over the role of precedent in judicial decision-making. This term, two significant precedents have been overruled by close 5-4 majorities (including in Knick v. Township of Scott, which I analyzed in this post), and another important precedent has been significantly eroded in the Kisor case. The liberal justices fear that the conservative majority might overrule more liberal precedents in the future, and have thus argued for strong adherence to stare decisis in a number of recent opinions. Henry Gass summarizes the debate in an article for the Christian Science Monitor:

As the current court nears the end of its first term with a reliably conservative five-justice majority, that debate [over precedent] has surged back to prominence. Two long-standing precedents have been overturned in 5-4 decisions split along ideological lines. In a climate where the fate of high-profile precedents like Roe v. Wade are uncertain, the justices have been writing at length about how they think the court's approach to handling precedent needs to change….

The Supreme Court has over time developed four factors to consider when overturning precedent: the quality of the past decision's reasoning, its consistency with related decisions, legal developments since the past decision, and reliance on the decision throughout the legal system and society.

When the court last month overruled Nevada v. Hall – a four-decade-old precedent concerning states' immunity from lawsuits in other states' courts – in a 5-4 decision along ideological lines, Justice Stephen Breyer wrote in dissent that none of the four factors justified the majority's reasoning.

"The majority has surrendered to the temptation to overrule Hall even though it is a well-reasoned decision that has caused no serious practical problems in the four decades since we decided it," he wrote. "Today's decision can only cause one to wonder which cases the Court will overrule next…"

With Williamson County rooted in decisions from the late 1800s, the opinion "transgresses all usual principles of stare decisis," she wrote, and "smashes a hundred-plus years of legal rulings to smithereens."

I gave my take on this in comments I made, quoted in Gass' article:

Many [past] decisions support the notion that precedents should sometimes be overturned, says Ilya Somin, a professor at George Mason University's Antonin Scalia Law School.

"Stare decisis will not stop the justices from overturning a precedent they think is badly wrong and causes significant harm, and I think it shouldn't," he adds. "There is a serious cost to keeping an error on the books indefinitely when, as a practical matter, the error can only be cured by a Supreme Court decision."

The flexibility built into the doctrine acts as a compromise mechanism, of sorts. While Justice Ruth Bader Ginsburg joined Justice Breyer's and Justice Kagan's dissents criticizing the scrapping of precedents this term, she voted to overturn a long-standing precedent last term and allow states to collect sales tax on online sales.

"For most of the justices the fuzziness may be a virtue more than a defect because it allows them to overrule when they want, and also to appeal to stare decisis when they don't," says Professor Somin.

I simply do not believe that stare decisis will prevent either the liberal or the conservative justices from overruling constitutional precedents they believe to be badly wrong, though both are happy to wave the stare decisis flag whenever precedents they like are imperiled. In most cases, the real source of the dispute is less the theory of stare decisis, than a disagreement over whether the precedent in question was actually wrong to begin with.

The liberal justices who appeal to stare decisis today also applaud the work of the New Deal-era and Warren courts, both of which overturned numerous longstanding constitutional precedents. Given the opportunity, they would likely happily overrule such precedents as Citizens United and the travel ban case, both much reviled on the left (the latter deservedly so, in my view).

I believe Justice Ginsburg was right in Gamble, and possibly also in Wayfair. But a consistent champion of stare decisis she is not. Neither are any of the other justices, when push comes to shove, and they get a chance to overrule a constitutional decision they believe to be truly awful. And this attitude strikes me as generally a good thing. I elaborated on the reasons why in more detail here:

The Supreme Court needs to have the power to overturn flawed constitutional precedent, as this is usually the only way to correct wrong constitutional decisions, short of using the extraordinarily difficult amendment process.

If precedent were sacrosanct, the Supreme Court could not have reversed or superseded any of its most notorious past decisions. Just [last] summer, in the travel ban case, the Court repudiated Korematsu v. United States, the notorious 1944 decision that upheld the World War II-era racially-based internment of over 100,000 Japanese-Americans. Hardly anyone objected that it was somehow inappropriate for the justices to junk a 74-year-old precedent. Indeed, the main objections voiced (including by me) were that the Court implicitly retained much of the overdeferential approach to executive power it had used in Korematsu, thereby making a terrible mistake in the travel ban case itself.

Few people, particularly on the left, pine for the return of Bowers v. Hardwick, the 1986 case in which a narrow majority upheld the constitutionality of anti-sodomy laws. The Court eventually overruled Bowers in Lawrence v. Texas (2003), which has since become something of an iconic decision.

Highly controversial Supreme Court precedents like Bowers, Korematsu, and—yes—Roe [v. Wade], are never truly "settled" unless and until a broad consensus develops supporting them. In some cases, a precedent might become settled despite continuing widespread doubts about its correctness, if getting rid of it would inflict massive costs by upsetting expectations or generate an overwhelming political backlash. But even that won't necessarily prevent reversal if those who seek to overrule the decision believe that its perpetuation inflicts even greater costs….

Today, pretty much every…. legal commentator can name Supreme Court decisions they would like to see overruled. High on my list are cases as Kelo v. City of New London (and also Berman v. Parker, the earlier precedent on which it is based), Gonzales v. Raich, and—most recently—the travel ban case. I would be happy to see all of these eliminated at the first available opportunity. There are other precedents I would like to see cut back on more gradually….

If you follow constitutional law at all closely, you probably have a list of your own, that may well differ from mine….

The justices' highest legal obligation is not to the Court's past precedents, but the Constitution. If they are convinced that the latter conflicts with the former, they should overrule, if at all possible. There is a good case for adhering to precedent in situations where the court is uncertain whether it is correct or not. In such situations, it might be reasonable to defer to the seeming accumulated wisdom of earlier judges, especially if there was a broad cross-ideological consensus among them. As noted above, I think it is also justifiable to maintain wrong precedent in some instances where massive reliance interests would be upset otherwise.

But none of these considerations justifies maintaining precedents that the Court believes are badly wrong, and causing more harm than good in the real world. In such scenarios, the Court has a special obligation to help undo the evil that it had a major role in creating.

Ironically, living constitutionalists (the school of thought to which most liberal judges adhere) probably have more reason to oppose strong rules of stare decisis than originalists do. One of the tenets of most versions of living constitutionalism is that we need to update constitutional doctrines to take account of new knowledge acquired over time. If so, today's judges are more likely to get issues right than those of earlier eras (other things equal); not because current judges are necessarily smarter or more virtuous than their predecessors,  but because they have the benefit of greater knowledge acquired through a longer period of historical experience.

Originalism's connection to precedent is more ambivalent, and originalists in fact disagree among themselves about how much deference to give it. Judges from some earlier eras might sometimes have greater insight into original meaning than today's jurists do, at least in the case of those who personally lived through the period when the relevant constitutional provisions were drafted and ratified. On the other hand, later judges often have access to superior methods for determining original meaning, as there have been numerous methodological improvements in originalist legal theory in recent years. Moreover, the potentially superior insight of earlier judges is only relevant - from an originalist point of view - when those judges' decisions actually tried to apply originalism. In many cases, their decisions were based on other methodologies.

Furthermore, while originalists are committed to a fixed textual meaning, they also recognize that doctrine can change over time when a fixed meaning is applied to new facts, or to a better understanding of old ones. That too can justify overturning precedent.

Overall, I think those originalists who give constitutional precedent only modest weight have the better of the debate, in my view. And living constitutionalists have even more reason to be skeptical of strong forms of stare decisis.