Ye, formerly known as Kanye West, was suspended from Twitter yesterday after posting an image of a swastika inside the Star of David. Ye also defended Nazis and said he likes Hitler during a Thursday live chat with Infowars' Alex Jones.

Twitter CEO Elon Musk said the rapper was suspended because "he again violated our rule against incitement to violence."

It's also another revealing moment in the debate about free speech on Twitter.

I think Ken "Popehat" White says it best: Musk is certainly free to kick off Ye—"just like [he] can boot ANYONE for any reason or none. He owns the platform. That's HIS free speech and free association." Any suggestion that he shouldn't be allowed to give Ye the boot or that this somehow infringes on the rapper's rights is silly. But the move makes even more laughable the idea that Musk is some sort of stalwart defender of free speech.

…his cultists will still eat it up and call him a free speech hero while tying themselves in knots saying "WELL ACTUALLY it's a normal free speech rule that parody has to be EXPLICITLY LABELED AS PARODY IN THE TITLE" and groveling nonsense like that. Gross…..

By no reasonable definition was Ye "inciting violence," even if what he shared was really gross. Musk is doing here what so many people complained about Twitter doing in the pre-Musk days: uncomfortably shoving speech that is offensive, ugly, or otherwise undesired into a terms-of-service violation that doesn't really fit.

It's understandable why Twitter might not want to allow antisemitism, pro-Nazi content, or speech reflecting other forms of bigotry. I think there's value in letting people show who they really are and in fighting bad speech with more speech rather than bans. But advertisers and a lot of other folks feel differently.

Musk's move here is more in line with what mainstream observers seem to want with regard to content moderation on Twitter than with the free speech absolutism that both his critics and his supporters attribute to him. It's also unsurprising, given the realities and pressures of running a popular, ad-dependent social platform.

In reality, Musk has made many moves contrary to free speech absolutism since taking over Twitter.

Yes, Musk did say that former President Donald Trump could return to Twitter. And he ended a policy pertaining to COVID-19 misinformation. But he's also cracked down on parody accounts and said anyone doing parody must label it as such not only in their bio but in their Twitter handle. He's kicked off people for parodying him, and for a number of other questionable reasons. Now he's suspended Ye on a very broad reading of incitement to violence claims.

("If anyone can get inside his head, I'd love to hear it," Corbin Barthold of TechFreedom told The New York Times recently. "He seems to shift from free-speech absolutism until he decides he doesn't like something.")

People can argue over whether Musk's various moderation moves are reasonable for a major, mainstream social media site to make. But they are definitely not the moves of an unwavering defender of free speech. Rather, they reflect trade-offs between a commitment to free speech and to other values and concerns. 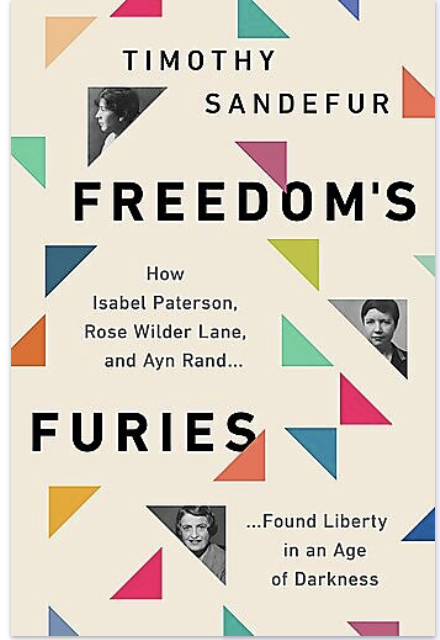 Freedom's Furies. A new book by Timothy Sandefur looks at the intellectual and political forces that shaped the thinking of Ayn Rand, Isabel Paterson, and Rose Wilder Lane and how these three women in turn shaped the U.S. liberty movement. Earlier this week, I participated in a panel discussion of the book at the Cato Institute, alongside Sandefur, Cato's Paul Meany and Kat Murti, and longtime Libertarian Party activist Carla Howell. You can watch the discussion here.

President Joe Biden's student loan debt forgiveness plan will face Supreme Court review. The court announced on Thursday that it would hear a case concerning the legality of the Biden administration's plan to waive a lot of student loan debt. The Court said it will expedite the review, holding oral arguments in February.

So far, several lower courts have hit pause on the administration's plan. A U.S. district judge in Texas declared it unconstitutional, and the U.S. Court of Appeals for the 5th Circuit recently denied a request to halt that ruling while the administration's appeal plays out.

Reason's 2022 Webathon is still underway. Here's a thread from Senior Editor Stephanie Slade about reasons to support our work (and how appreciative we are of those who do!):

I'm grateful almost beyond belief to get to work for @reason, alongside amazing friends and colleagues doing excellent and important work like this: https://t.co/MqmYAGpnxU

Need more reasons? Nick Gillespie and Zach Weissmueller talked yesterday to Editor in Chief Katherine Mangu-Ward, as well as me, Robby Soave, Billy Binion, and Reason TV's Meredith and Austin Bragg about the work we've been doing at Reason that we couldn't do anywhere else. Check it out below. Go here to donate.

• James Bernard, the San Antonio cop who shot a teenager eating a burger in a McDonald's parking lot (leaving the teen in the hospital for two months), has been indicted on an attempted murder charge.

• "In a blistering 30-page opinion, a federal judge ordered sanctions against the attorneys of Kari Lake and Mark Finchem in their lawsuit against voting machines, hoping to deter 'similarly baseless suits in the future,'" reports the Arizona Republic.

• A majority of Republicans think the 2022 elections were "free and fair," according to a new poll.

• Amazon will not cave to activist pressure and remove the book Hebrews to Negroes: Wake Up Black America, which came to people's attention after Kyrie Irving of the Brooklyn Nets promoted it.

• "People who haven't met [Ron DeSantis] think he's a hot commodity. People who have met him aren't so sure," writes Mark Leibovich.

• Axios has a good overview of some of the anti-tech lawsuits raging right now.

• China faces a difficult road ahead as it eases COVID-19 restrictions. Years of lockdown and other COVID-19 control measures may mean fewer people got the virus, but they also mean less natural immunity in a country where the vaccines are also weaker than those used here and where many elderly people are not vaccinated.

• "The widow of a popular Kansas City-area musician has filed a lawsuit accusing Anthony Fauci and the National Institutes of Health of indirectly causing her husband's death from COVID-19 by funding coronavirus experimentation at a lab in China," reports The Kansas City Star.

• At The Daily Beast, a good op-ed from First Amendment lawyer Adam Sieff on the dangers of internet censorship.

• CNN has canceled all live programming on its sister network HLN. "HLN crime programming will move under the WBD Networks, led by Kathleen Finch, and will be merged with the ID cable channel," the New York Post reports.

The botched pursuit of the Russiagate story illustrates how the media shed credibility.