According to the National Youth Tobacco Survey (NYTS), nicotine vaping among teenagers has fallen dramatically since 2019, undercutting fears about an "epidemic" of such behavior. Last spring, the Centers for Disease Control and Prevention (CDC), which oversees the survey, suggested that drop might be illusory because the COVID-19 pandemic reduced youth access to vaping products. But the latest NYTS results, published today in the CDC's Morbidity and Mortality Weekly Report (MMWR), indicate that the adolescent vaping rate is only slightly higher this year than it was 2021, even though nearly all students have returned to in-person schooling.

The CDC still refuses to acknowledge the decline in adolescent vaping since 2019, which is consistent with the downward trend found in another government-sponsored survey. The agency implausibly suggests that methodological changes—in particular, the switch to an online survey—might account for the sharp decrease. That argument reflects the CDC's determination to maintain public alarm about adolescent vaping, regardless of what the data show.

The CDC also refuses to acknowledge that the downward trend in adolescent smoking not only continued but accelerated as vaping took off, let alone acknowledge the positive implications of that shift. And it continues to cite underage consumption as a reason to restrict adult access, notwithstanding the lifesaving potential of replacing smoking with vaping.

The premise underlying the CDC's skepticism is that students who respond to the NYTS online, which they might do in school or in other settings, are less inclined to report e-cigarette use than they would be if they completed a questionnaire in school. While that's possible, it is also plausible that the enhanced sense of privacy at home or in other settings outside of school increases candor. In any event, it seems clear that underreporting attributable to the change in methodology cannot entirely account for the decrease since 2019, which was apparent even when the CDC limited its analysis to students who took the survey in school.

The MMWR report does not include the 2022 data for smoking. But according to prior surveys, past-month cigarette consumption by high school students fell from about 16 percent in 2011 to about 2 percent last year. That trend obviously does not support warnings that vaping would result in more smoking among teenagers, a concern that is notably absent from the CDC's press release about the 2022 results. 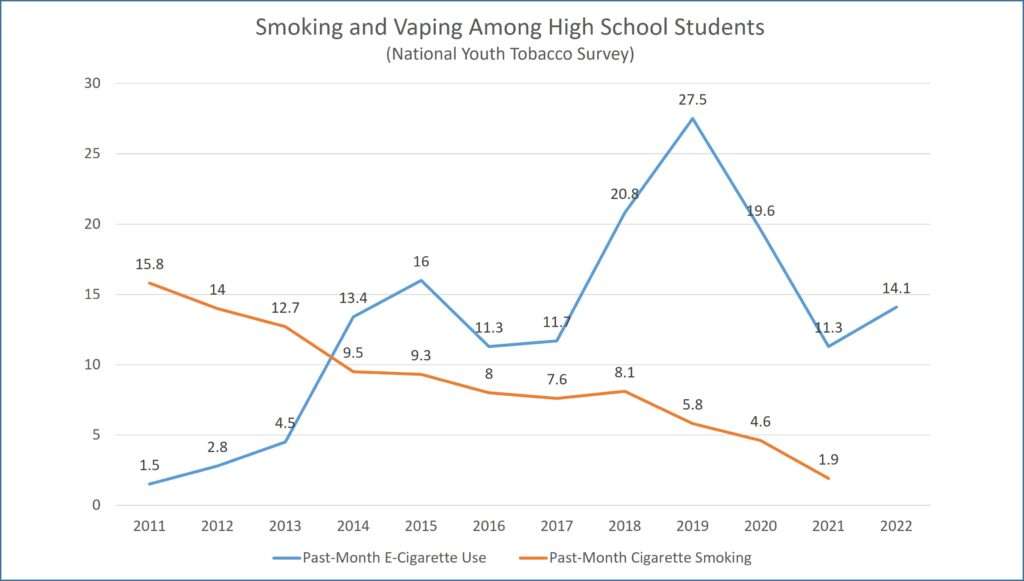 Since the numbers do not support previous warnings that adolescent vaping was rampant and rising at an alarming rate, the CDC's current spin is that any underage e-cigarette use is a problem grave enough to justify interventions that discourage smokers from switching to a much less hazardous source of nicotine. "This study shows that our nation's youth continue to be enticed and hooked by an expanding variety of e-cigarette brands delivering flavored nicotine," Deirdre Lawrence Kittner, director of CDC's Office on Smoking and Health, says in the agency's press release. "Our work is far from over. It's critical that we work together to prevent youth from starting to use any tobacco product—including e-cigarettes—and help all youth who do use them to quit."

Such rhetoric deliberately elides the fact that e-cigarettes, which do not contain tobacco and do not generate combustion products, pose a much smaller health risk than conventional cigarettes. Despite that huge difference, officials like Kittner are completely incurious about the extent to which teenagers are vaping instead of smoking, which should count as an improvement for an agency that is supposedly dedicated to decreasing smoking-related morbidity and mortality.

Several years ago, in the midst of the panic about the adolescent vaping "epidemic," I asked Scott Gottlieb, then the head of the Food and Drug Administration (FDA), whether his agency should consider the public health benefits of the shift from smoking to vaping among teenagers. Gottlieb acknowledged that some teenagers who vape might otherwise be smoking. "It's probable," he said. "It's implausible for me to say that there aren't kids out there who are using e-cigarettes instead of combustible tobacco and probably, if they never had this opportunity, would have used combustible tobacco." But Gottlieb added that the FDA can't take that phenomenon into account because "our mandate is that no child should be using a tobacco product."

That position suggests the FDA's mission to reduce underage vaping conflicts with the public health goal of minimizing morbidity and mortality. The FDA continues to portray adolescent vaping as an unalloyed evil, and so does the CDC, as reflected in Kittner's comments.

By referring to teenagers who are "enticed and hooked" by vaping products, Kittner also equates any e-cigarette use with addiction. Yet in the 2022 NYTS, just 4.2 percent of high school students and 0.4 percent of middle school students reported that they had vaped every day during the previous month. In assessing the gravity of that problem, it is crucial to estimate how many of those students would otherwise be smoking—a question that does not seem to interest Kittner at all.

The MMWR article says "most e-cigarettes contain nicotine, which is highly addictive, can harm the developing adolescent brain, and can increase risk for future addiction to other drugs." In an article published last year by The American Journal of Public Health, David J.K. Balfour and 14 other prominent tobacco researchers acknowledged the legitimacy of such concerns. But they found that the evidence supporting them was inconclusive.

"Animal model studies have found that nicotine can affect maturation of brain
parts associated with executive function and decision-making, potentially leading
to more impulsive behavior, cognitive deficits, and greater likelihood to self-administer other drugs," Balfour et al. noted. "In addition, there is evidence in humans of neurological changes attributed to nicotine in the brains of adolescent smokers, interpreted by some as reflecting similar harmful effects to those in the animal models. These studies lead some researchers to suspect that adolescent nicotine use in any form may lead to long-term structural and functional brain changes with associated negative implications for cognition or impulse control."

The researchers added some important caveats that are notably missing from the CDC's gloss: "Given species differences and questions about the relevance of
experimental animal nicotine dosing paradigms to human use patterns, the
validity of extrapolation to humans is speculative. Whether impaired brain
development with behavioral consequences occurs in young nicotine consumers is difficult to determine because of potential confounding of genetic and socioeconomic factors, the influence of other substance abuse, and the role of preexisting neuropsychiatric problems associated with youth smoking. Research has yet to isolate nicotine use in the adolescent years and then examine later sequelae."

The CDC is loath to concede those limitations for the same reason it does not want to acknowledge that the "epidemic" of underage vaping seems to be fading: It would weaken the case for public policies, such as flavor bans, that aim to reduce adolescent nicotine consumption by restricting the variety and availability of vaping products. The CDC not only is unfazed by the costs of those policies, which deter the harm-reducing switch from smoking to vaping by making alternative nicotine products less appealing and less accessible. It does not even admit there are any tradeoffs to consider.

Whatever the dangers of adolescent nicotine consumption, cigarettes pose the same hazards. But unlike vaping products, cigarettes expose consumers to myriad combustion products that increase the risk of cancer, heart disease, and other life-threatening conditions. According to the National Academies of Sciences, Engineering, and Medicine, Balfour et al. note, "Laboratory tests of e-cigarette ingredients, in vitro toxicological tests, and short-term human studies suggest that e-cigarettes are likely to be far less harmful than combustible tobacco cigarettes." The British Royal College of Physicians likewise concluded that "vaping isn't completely risk-free but is far less harmful than smoking tobacco."

The CDC's persistent equation of vaping with "tobacco use" implies that these differences do not matter. The agency is so determined to stamp out underage vaping that it is willing to mislead the public about the harm-reducing potential of e-cigarettes. As a result of such messages, Americans are understandably confused about the relative hazards of nicotine products.

Guy Bentley, director of consumer freedom at the Reason Foundation (which publishes Reason), notes that the FDA, which seems determined to ban flavored vaping products because teenagers like them, acknowledges the gap between public perception and the scientific evidence. "I'm fully aware of the misperceptions that are out there and aren't consistent with the known science," Brian King, director of the FDA's Center for Tobacco Products, told the Associated Press last month. "We do know that e-cigarettes, as a general class, have markedly less risk than a combustible cigarette product. That said, I think it's very critical that we inform any communication campaigns using science and evidence. It has to be very carefully thought out to ensure that we're maximizing impact and avoiding unintended consequences."

King's caveat suggests that the FDA is reluctant to speak plainly about vaping because that might weaken the "impact" of its messaging and cause "unintended consequences." In other words, forthrightly acknowledging that vaping is much less dangerous than smoking might encourage e-cigarette use by teenagers or adult nonsmokers. The CDC is so worried about that risk that it actively reinforces the "misperceptions" that King acknowledges, without regard to the impact on public health. As far as the CDC is concerned, Americans can't handle the truth.

Balfour et al. warned that "policies intended to restrict e-cigarette use may have unintentionally increased cigarette smoking." They noted evidence that e-cigarette taxes and restrictions on sales have had that perverse effect, and they suggested that the same could be true of limits on flavor variety. "While flavor bans could reduce youth interest in e-cigarettes, they could also reduce adult smokers' vaping to quit smoking," they wrote. "Like youths, adults prefer nontobacco flavors, both groups favoring fruit and sweet flavors."

The government's anti-vaping propaganda is likewise a menace to public health. Rational consumer decisions depend on accurate and honest information, which is the opposite of what the CDC offers.