But that fact seems to get obscured in coverage—even skeptical coverage—of the White House's claims about reducing the federal deficit.

Starting in this year's State of the Union address and continuing through through his op-ed last month in The Wall Street Journal, Biden has constantly claimed to have overseen a huge one-year reduction in the budget deficit. Indeed, this year's deficit is expected to be less than half of last year's $2.8 trillion shortfall. Smart reporters and commentators have pointed out, correctly, that this drop in the deficit is a mirage created by the end of the federal government's COVID-19 emergency spending, which blasted the budget deficit to never-before-seen levels during each of the past two fiscal years.

That's an important caveat, but it doesn't tell the whole story. The White House's claims of deficit reduction are not merely "misleading" or "actually true…but uttterly deceitful"; they are absolutely, definitively false.

To prove it, all you have to do is look at the current budgetary baseline released last month by the Congressional Budget Office (CBO) and compare it to the baseline from February 2021. In other words, compare the trajectory of deficit spending at the very end of the Trump administration to the current trajectory of deficit spending after one year of Biden's term in office. Here's how that looks, courtesy of David Ditch, a policy analyst at the Heritage Foundation who helpfully put the two trajectories into a single chart: 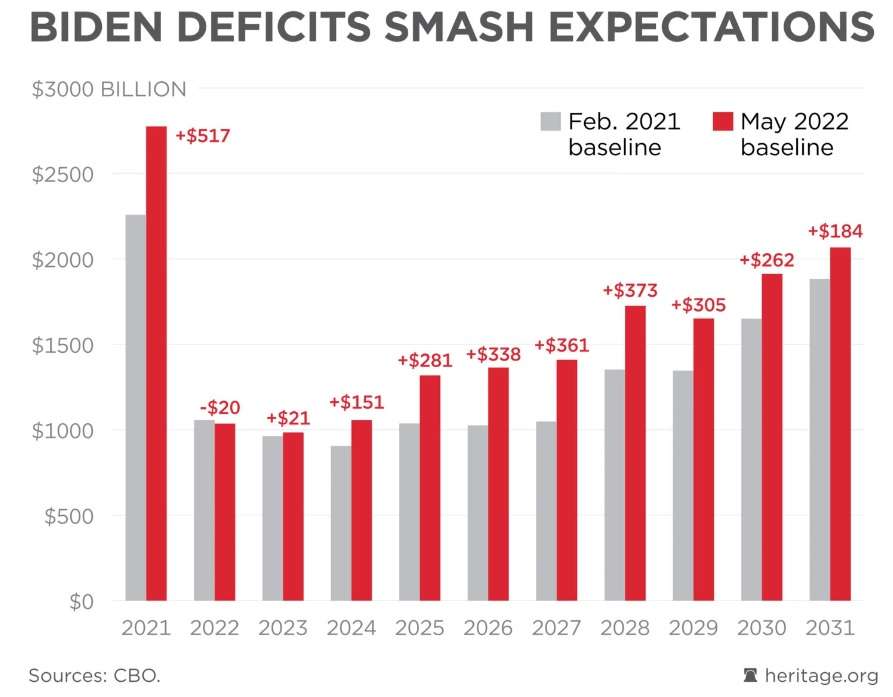 You can see the big drop-off from fiscal year 2021 to fiscal year 2022 that the White House has been talking about. What hardly anyone is discussing is the gap between the red bars and the grey bars in every year over the next decade. That gap is the result of deficit spending that Biden signed into law over the past 16 months, including the American Rescue Plan, the bipartisan infrastructure package, and spending increases included in the federal budget that passed in March.

The root of much of this confusion is the fact that we use the term "deficit" to describe both the gap between revenue and spending in a single year and that same gap over longer periods of time. But all federal policymaking uses a 10-year budget window for the purposes of calculating deficits—thats why big pieces of legislation frequently are structured to game the CBO's deficit scoring system as much as possible. The White House's budget experts know this, so the decision to focus on two years instead of all 10 is a decision to push an obviously inaccurate picture.

To understand the comparison, it may be helpful to remove the context of government spending.

Every 17 years, much of the Eastern Seaboard is overrun by billions of cicadas that emerge from hibernation in early summer to reproduce. This happened most recently last year. There are other types of cicadas that come around every year, so if you were to measure the number of cicadas in Washington, D.C., this June, you'd get a much smaller figure than in June 2021.

If you looked at just those two figures—last year's total and this year's total—you might conclude that the population of cicadas has dropped dramatically. But that information would tell you nothing useful about the long-term trajectory of the cicada population, because you'd be ignoring the billions of cicada larva sleeping peacefully underground and awaiting the year 2038.

The only difference is that Biden's influence on the budget deficit will be apparent well before 2038. The deficit will begin rising again next year and will rise faster and higher than it would have before Biden took office, as the CBO's projections make clear.

The Biden administration has added to the deficit. That's a fact, as the president likes to say, and a fact that doesn't have to be wrapped in caveats or conditionals.