In August of 2021, approximately eight East Cleveland Police Department officers descended on the home of William Fambrough. His alleged infraction: a parking violation.

Or so they said. But Fambrough's story is much more insidious than that. It involves some serious alleged First Amendment transgressions—carried out by the government, not Fambrough.

The 74-year-old East Cleveland man had the audacity last year to promote a challenger to Brandon L. King, East Cleveland's mayor. Fambrough used his step van—something he'd employed many times during the course of his long-running political advocacy—to instead campaign for Juanita Gowdy, an East Cleveland city councilor who had a reputation for criticizing both King and law enforcement. Fambrough's media company produced advertisements for Gowdy, and he displayed Gowdy's likeness on his van while driving around playing recorded endorsements from East Clevelanders.

That didn't sit well with police, who began leveraging obscure municipal ordinances to criminalize Fambrough's behavior and paralyze Gowdy's campaign. Their visit to his home in August of last year was not their first, as they repeatedly harassed him for the crime of parking his van on the street. They ultimately towed the vehicle and caused thousands of dollars in damage in the process, kneecapping his ability to promote Gowdy's candidacy in the final stretch of the primary.

That ordinance—which prohibits parking "a truck, commercial tractor, trailer, semi-trailer, a motor home or recreational vehicle" in a driveway or on a residential road—is almost never used, if ever. Between January 2016 and May 2022, the city hadn't enforced it once, according to a records request detailed in a civil rights lawsuit filed this week by Fambrough in the U.S. District Court for the Northern District of Ohio. 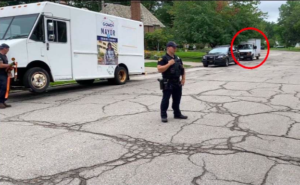 Yet no one could have made that more clear than the cops who initiated the tow and subsequent property destruction, as they turned a blind eye to a van violating the same ordinance about one or two houses down. They also cited Fambrough for "noise pollution," despite that he'd obtained a permit from East Cleveland's own police department and that the Supreme Court has ruled that the use of sound trucks is protected under the First Amendment.

Prior to Fambrough's court appearance, Assistant Law Director Heather McCollough, who serves as both prosecutor for East Cleveland and counsel for Mayor King, also said the quiet part out loud. After citing that Fambrough had "made complaints about the police department," filed "public records requests," and asked about election ordinances, McCollough told Fambrough's attorney that Fambrough needed to "stand down" if he hoped to achieve any sort of peaceful resolution.

He pleaded guilty to a misdemeanor and was told that such an ending may not come to him again if he did not "mind his own business."

The problem for McCollough is that none of the complaints she outlined are remotely criminal. On the contrary, they are the epitome of First Amendment-protected speech, allowing citizens to hold the government accountable without fear of reprisal for doing just that.

"It's actually incredibly and tragically common for governments to retaliate against citizens' political speech or for criticizing the government or the police," says Ben Field, an attorney with the Institute for Justice, the public interest law firm representing Fambrough. "Every single government—whether it's federal, state, or local—just has so many laws on the books that it's always possible to point to somebody and say, 'Well, you broke one of them,' and figure out what that law is after the fact. If governments are allowed to do that, then nobody's rights are safe."

Such was the case with Jerry Rogers Jr., who was arrested in Louisiana for violating "14:00000″—a crime that doesn't exist—after police in St. Tammany Parish grew furious that he had criticized their failure to solve a local murder.

"I think that most people have the idea…that the First Amendment has never been more robust. And when it comes to governments actually writing down laws to restrict speech, that's true," adds Field. "But if the government doesn't write down a law but instead pre-textually uses a law to target speech it doesn't like, the protections are actually much, much weaker."

That's particularly relevant to East Cleveland when considering the city's high crime rate and short-staffed police department. It is the government's job to protect people from those who violate their rights—not to waste their limited resources to protect the government from the people. Yet whether or not Fambrough will even get the chance to state his case before a jury will hinge on him overcoming a slew of immunity doctrines that protect the state from having to provide recourse when it violates someone's constitutional rights.

But this isn't just about Fambrough, and it's not just about East Cleveland. "Even if most people don't drive sound trucks around to support candidates," says Field, "the same thing that happened to William can happen to anybody."