Weeks after President Joe Biden effectively told Americans to seek out off-the-books COVID-19 booster shots, his health officials are finally getting around to giving their stamp of approval. Unfortunately, there's still plenty of confusion about who needs boosters, when they should get them, and how recipients of the Johnson & Johnson vaccine should approach the whole matter.

Let's start with what we know. On Thursday, a panel of medical experts at the Food and Drug Administration (FDA) voted unanimously to recommend a half-dose Moderna booster shot for people over age 65 or otherwise deemed to be at high risk from COVID due to other medical conditions. Those same groups were given the go-ahead to get a booster shot of the Pfizer/BioNTech vaccine last month. The same panel will meet on Friday to discuss possible boosters for the Johnson & Johnson vaccine.

Thursday's vote is not the same thing as granting full FDA approval for Moderna booster shots, because of course nothing can ever be that straightforward for the federal bureaucracy that's slow-walked vaccine approvals, limited the availability of at-home testing kits, and otherwise made a mess of its responsibilities during the pandemic. But, as The New York Times notes, the FDA usually follows the recommendations of its panels and is expected to issue a full approval "within a few days." No rush, fellas.

What if you're not over 65 or at high risk from COVID? Go with your gut, because the official guidance is a total mess. When the FDA approved booster shots of the Pfizer vaccine last month, it and the CDC disagreed about whether people in certain occupations—like service sector jobs that might require meeting lots of people face to face—should get boosters. Then, CDC Director Rochelle Walensky contradicted her own team, sided with the FDA, and unofficially told workers in higher-risk occupations to seek out a booster shot.

Maybe this time around the messaging will be more informative when the FDA gets around to issuing its official guidance on Moderna boosters, but don't hold your breath.

There's also confusion about what Johnson & Johnson vaccine recipients should do—some of which might be cleared up by today's meeting, but, again, don't expect much. Unlike the Pfizer and Moderna shots, which use mRNA, the Johnson & Johnson jab is based on old-school antivirus tech: It contains a weakened version of the virus to teach your body's immune system how to combat the real thing. The roughly 15 million Americans who got the Johnson & Johnson vaccine received just a single shot, as opposed to the double dose required for Pfizer and Moderna.

Understandably, that's left some people confused about what to do next. Should Johnson & Johnson recipients seek out Pfizer or Moderna booster shots? Is that dangerous?

A National Institutes of Health study published Wednesday says "mixing and matching" vaccines like that is just fine. CNBC reports:

There were no serious side effects tied to the additional shots and no new symptoms emerged after participants received the booster shots, researchers said. Two participants vomited after their boosters; one had received Moderna and the other J&J. Two other people who got a J&J booster reported fatigue or insomnia.

"These data suggest that if a vaccine is approved or authorized as a booster, an immune response will be generated regardless of the primary Covid-19 vaccination regimen," researchers wrote in the study. "Heterologous prime boost strategies may offer immunological advantages to optimize the breadth and longevity of protection achieved with currently available vaccines."

But don't expect the FDA to weigh in on these important questions when its panel meets Friday to discuss the Johnson & Johnson vaccine. "The FDA panel seems likely to duck the question and rule only on whether J. & J. recipients should receive a J. & J. booster," writes the Times' David Leonhardt. "It is the latest example of a recurring Covid problem. Again and again, government officials have chosen to follow pre-existing bureaucratic procedures even when doing so has led to widespread public confusion and counterproductive behavior."

A return to normalcy. Most Americans surveyed in a new Gallup poll say they would prefer the government play a less active role in managing their lives, a reversal from last year when the same survey found more support for government problem solving. 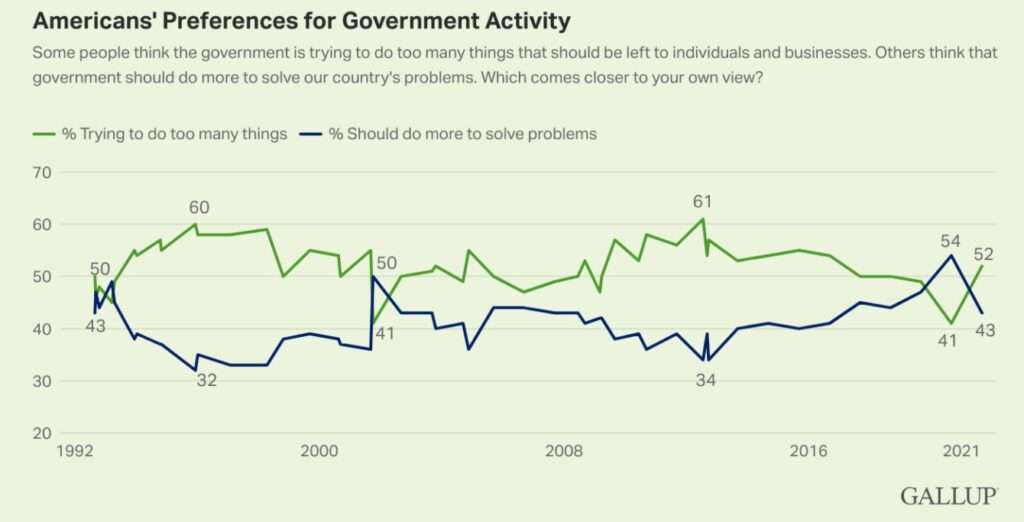 Consumer spending increased by 0.7 percent during September, the Commerce Department announced on Friday morning. It's a signal that Americans are unfazed by ongoing supply chain issues, rising inflation, and the lingering pandemic, The Wall Street Journal reports.

• A Los Angeles city councilman who has championed a ban on flavored vape products was indicted on federal corruption charges this week.

• Robert Durst, who unintentionally admitted to murdering Susan Berman during filming for an HBO documentary about his life, was sentenced to life in prison.

• Journalists discovered that Missouri was putting teachers' private information at risk online. Guess what happened next:

Holy shit. Journalists found that a Missouri gov't agency's incompetence exposed personal info (SSNs) of educators across the state, and disclosed the breach to the state… and the governor's response is that he WANTS TO PROSECUTE THE JOURNALISTS.

• An attempt to save America's only barrier reef from a strange, deadly disease.

• The big question no one is asking about America's supply chain issues: