Dominion Voting Systems, the focus of the former Trump campaign lawyer's conspiracy theory, is seeking $1.3 billion from her for defamation. 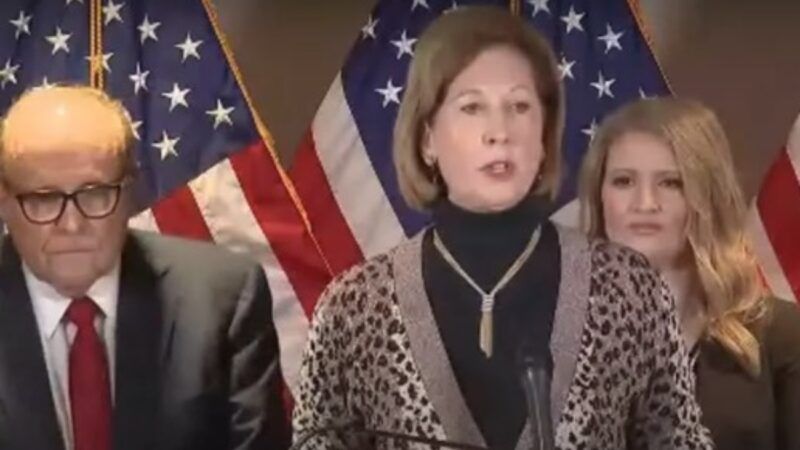 During the January 2 telephone conversation in which President Donald Trump pressured Georgia Secretary of State Brad Raffensperger to "find" the votes necessary to overturn President-elect Joe Biden's victory in that state, Raffensperger tried to test the outer boundaries of Trump's election-fraud allegations. Raffensperger suggested that Trump's concerns focused on "the absentee ballot process," as opposed to the outlandish claim that Dominion Voting Systems had helped Democrats deliver a phony victory to Biden by supplying them with fraud-facilitating election software. But the president made it clear that he was not ready to give up that fantasy, which is the focus of a $1.3 billion defamation lawsuit that Dominion filed against former Trump campaign lawyer Sidney Powell on Friday.

"I don't believe that you're really questioning the Dominion machines," Raffensperger said. "Because we did a hand re-tally, a 100 percent re-tally of all the ballots, and compared them to what the machines said and came up with virtually the same result. Then we did the recount, and we got virtually the same result. So I guess we can probably take that off the table."

Nope. "Well, Brad," Trump replied, "not that there's not an issue, because we have a big issue with Dominion in other states and perhaps in yours. But we haven't felt we needed to go there."

In reality, both Trump and his personal attorney, Rudy Giuliani, have gone there over and over again, promoting Powell's preposterous conspiracy theory in tweets, speeches, TV appearances, and press conferences. Her claims about what she describes as "the biggest crime in American history" were never substantiated in litigation by Trump's lawyers or her own lawsuits. But amplified by credulous right-wing TV and radio hosts such as Lou Dobbs, Sean Hannity, Maria Bartiromo, and Rush Limbaugh, Powell's wacky notions helped persuade a large majority of Trump supporters that the election was rigged to deny the president a second term.

The results were apparent last Wednesday, when hundreds of enraged Trump followers, summoned to D.C. by the president and inflamed by a speech in which he warned that an "egregious assault on our democracy" was about to destroy the country, invaded the Capitol, where a joint session of Congress was convening to affirm Biden's election. Before that deadly attack, Trump told the thousands of fans who had gathered for the "Save America March" that they should be outraged by "the highly troubling matter of Dominion Voting Systems." He claimed that Dominion machines in Fulton County, Georgia, "had an astronomical and astounding 93.7 percent error rate."

At the same rally, Giuliani said he had "conclusive proof" that in Georgia "the votes were deliberately changed by the same algorithm that was used in cheating President Trump and Vice President Pence." Giuliani promised that "over the next 10 days" the president's legal team would reveal "machines that are crooked." Instead, the president's lawyers dropped four lawsuits challenging Georgia's election results the very next day, avoiding a trial scheduled for Friday at which they would have had a chance to present their supposed evidence.

As Dominion's 124-page complaint against Powell shows in great detail, that has been her M.O. from the beginning: make wild claims, insist they are backed up by convincing proof that somehow never materializes, and ignore or dismiss all the countervailing evidence. Some highlights from the complaint:

• In a Newsmax interview on November 17, Powell said she had a video in which Dominion's founder bragged that the company "can change a million votes, no problem at all." She said she would tweet a link to that incriminating evidence. "Powell never tweeted out such a video because it does not exist," the complaint says. "The video does not exist because no such statement was ever made, nor would it be made, by Dominion's founder."

• When Fox News host Tucker Carlson asked Powell for evidence to back up her claims of massive fraud involving Dominion machines, he reported, "she never sent…any evidence, despite a lot of requests…not a page." After Carlson's staff pressed her for evidence, "she got angry with us and told us to stop contacting her…so we checked with others around the Trump campaign, people in positions of authority; they told us Powell has never given them any evidence either." Carlson concluded that Powell "never demonstrated that a single actual vote moved illegitimately by software from one candidate to another—not one."

• When Raffensperger and Georgia Gov. Brian Kemp, both Republicans who had supported Trump, pushed back against Powell's allegations, she concluded that they must be part of the conspiracy. "Mr. Kemp and the secretary of state," she averred in a November 21 interview on Newsmax, "are in on this Dominion scam with their last-minute purchase or award of a contract to Dominion of a hundred million dollars." As evidence of this alleged corruption, Powell presented a doctored copy of Dominion's certification as an election contractor, which she described as "undated." But it was undated only because someone had removed the date, which indicated that Dominion had been approved on August 9, 2019, more than a year before the election. And contrary to Powell's insinuation that "Dominion bribed Georgia officials for a no-bid contract," the complaint says, the company was chosen after "a competitive bid process."

• In her effort to show that Dominion was part of a decade-old international conspiracy that started with election fraud aimed at keeping Venezuelan strongman Hugo Chavez in power, Powell repeatedly conflated Dominion with a different company, Smartmatic, whose participation in the 2020 election was limited to Los Angeles County.

• When Powell actually tried to back up her claims in court, judges were not impressed. A federal judge in Michigan said Powell offered "nothing but speculation and conjecture that votes for President Trump were destroyed, discarded or switched to votes for Vice President Biden." A federal judge in Arizona was equally underwhelmed by Powell's Kraken. "Plaintiffs append over three hundred pages of attachments, which are only impressive for their volume," she wrote. "The various affidavits and expert reports are largely based on anonymous witnesses, hearsay, and irrelevant analysis of unrelated elections." She noted that "the 'expert reports' reach implausible conclusions, often because they are derived from wholly unreliable sources."

• Powell's experts included a failed congressional candidate and conspiracy theorist who discussed locations in Minnesota while alleging fraud in Michigan and falsely claimed that voter turnout in Detroit and North Muskegon exceeded the number of registered voters. That witness, the complaint notes, also has publicly claimed that George Soros, who was born in 1930, "helped form the 'Deep State' in Nazi Germany in the 1930s—along with President George H.W. Bush's father, the Muslim Brotherhood, and 'leftists.'"

• Another Powell "expert" claimed to have evidence of election fraud in Edison County, Michigan, a jurisdiction that does not exist.

• A witness whom Powell presented as a "Military Intelligence expert" later admitted that he never worked in military intelligence. Powell responded by repackaging his allegations as the testimony of a different witness.

• Two affidavits from Venezuelans who claimed to shed light on the conspiracy described by Powell used virtually identical language in describing their motivation for coming forward. (Both witnesses also described themselves as adults of "sound mine.")

As for countervailing evidence, the complaint says, "there are mountains of direct evidence that conclusively disprove Powell's vote manipulation claims against Dominion—namely, the millions of paper ballots that were audited and recounted by bipartisan officials and volunteers in Georgia and other swing states, which confirmed that Dominion accurately counted votes on paper ballots." Republican state officials, Republican members of Congress (including Senate Majority Leader Mitch McConnell), the Department of Homeland Security's Cybersecurity and Infrastructure Security Agency, former Attorney General William Barr, and leading election security experts have all said there is no evidence to support Powell's claims of electronic vote manipulation.

In the face of these decisive refutations, Powell has doubled down on her accusations, even after Dominion threatened to sue her. Her tireless advocacy of repeatedly discredited fraud charges has earned her the president's favor. Even after she was suddenly ejected from the Trump campaign's "elite strike force team," Trump and Giuliani continued to echo her claims. The president relied on her advice and even suggested that she be appointed as a special White House counsel charged with investigating them. Powell's loony crusade also has benefited her by enhancing her celebrity, boosting her book sales, and generating contributions from deluded Trump supporters.

But now Powell's ceaseless self-promotion may finally cost her. In its lawsuit, which was filed in the U.S. District Court for the District of Columbia, Dominion says her false claims have forced the company to spend "more than $565,000 on private security for the protection of its people," plus "more than $1,170,000" to "mitigate the harm to its reputation and business." Dominion says the reputational damage has cost the company hundreds of millions in lost profits and destroyed its resale value. In addition to an injunction requiring Powell to retract her false statements and barring her from continuing to defame Dominion, the company is seeking $651,735,000 in compensatory damages and the same amount in punitive damages.