President Donald Trump gave Michael Flynn a reason to be thankful over the holidays, announcing late Wednesday he was pardoning his former national security adviser. As Trump's administration wraps, will anybody else—especially anybody not directly connected to the president—get similar mercy?

Flynn pleaded guilty in 2017 to lying to the FBI about conversations with a Russian ambassador after Trump was elected but before Trump took office. Given the government's failure to directly tie Trump's administration to Russia's attempts to influence the 2016 election, Flynn's prosecution feel like a last-ditch effort to collect somebody's scalp over all of what happened. It's extremely unlikely, after all, that the U.S. will ever actually get their hands on the Russians who allegedly did attempt to meddle with the election.

The FBI's treatment of Flynn is typical of how the bureau tries to salvage prosecutions when it can't prove underlying crimes. Flynn is no hero, and he has a troubling history of working for corrupt governments like Turkey's, but it's not justice to toss him in federal prison for failing to pin any other actual crimes on him. It's easy to reconcile the belief that Trump has some corrupt cronies with the idea that the government failed to make a good case that Flynn belongs in jail.

But will there be any additional acts of mercy from Trump that aren't heavily driven by politics or direct connections to the president?

Trump has made a big deal of having commuted the life sentence of Alice Marie Johnson, then pardoning her, for her federal conviction back in the 1990s for involvement in a drug conspiracy. There's a reason why Johnson is the name Trump keeps bringing up: There aren't many others he could cite. Trump has a pretty terrible record when it comes to commutations and pardons: He has used his clemency powers less often than any modern president, even when compared to fellow one-termers George H.W. Bush and Jimmy Carter. Pew Research notes that Trump has used his clemency powers (either commuting a sentence or pardoning somebody entirely) 44 times during his presidency so far. The senior Bush used his clemency powers 77 times. Carter used it 566 times. Even Richard Nixon had a more merciful record. 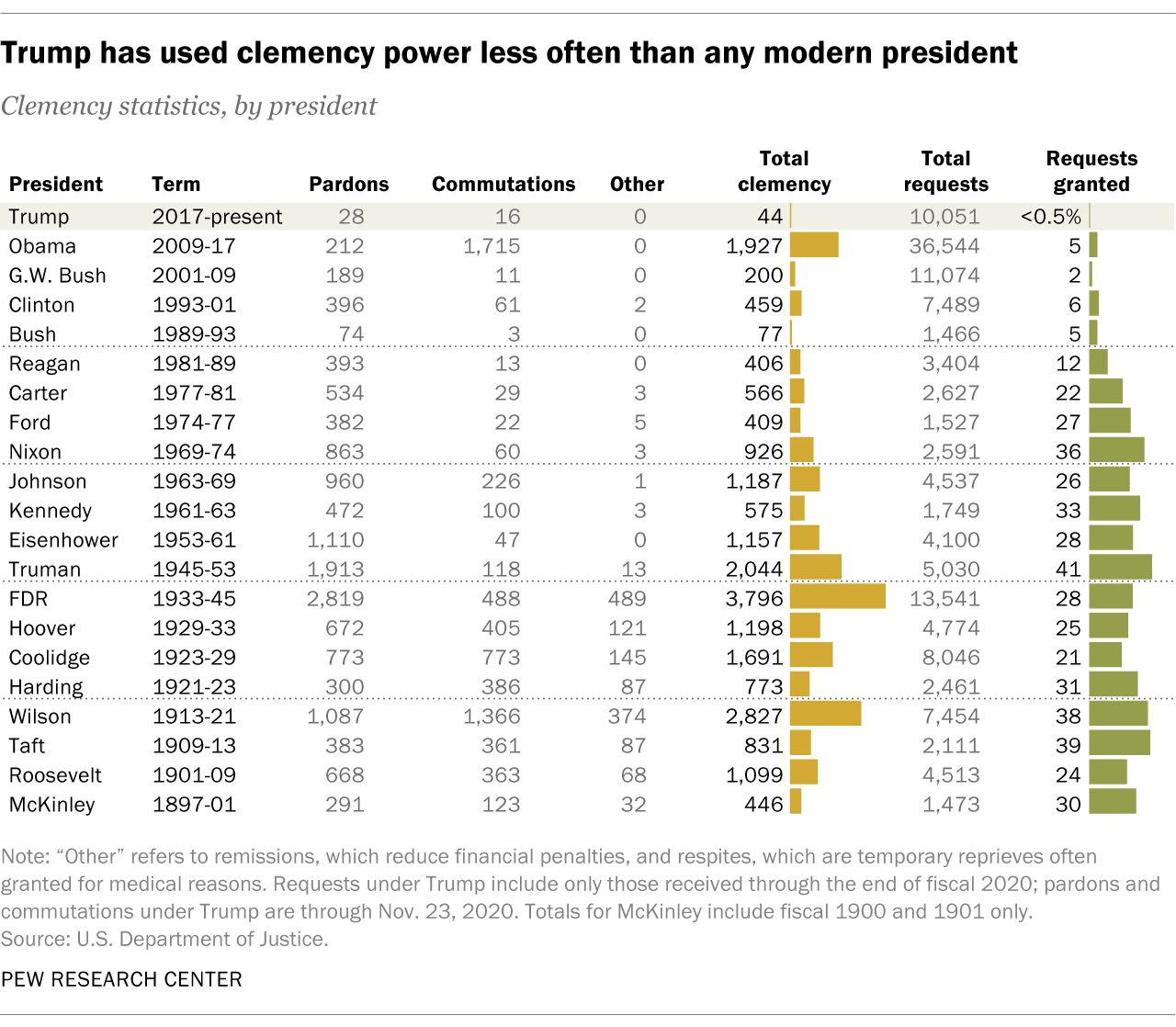 Some are still hoping for some pardons of some high-profile targets of federal prosecution, such as surveillance whistleblower Edward Snowden and Wikileaks founder Julian Assange. On the day Trump announced Flynn's pardon, Rep. Tulsi Gabbard (D-Hawaii) again requested, as she has in the past, that Trump pardon the two men. Snowden still faces federal espionage charges for revealing the National Security Agency's domestic surveillance, even as that system has subsequently been reformed in part because of his actions. Assange faces a political prosecution that threatens to undermine the First Amendment because he helped Chelsea Manning (who had her sentence commuted under President Barack Obama) reveal classified information about the management of America's overseas wars.

Both should be pardoned. If it makes Trump feel better, pardoning them will anger all the right people. When he was vice president, President-elect Joe Biden tried to stop other countries from granting Snowden asylum. And several media pundits argue that Assange is not a "real" journalist deserving the protections of the First Amendment.

At the moment, though, Trump is still insisting that he really won the election, even as his challenges to the results in various states keep losing. Given his lack of mercy throughout his administration, it's not clear whether or why he'd suddenly offer a lot of mercy to others.