When the federal government's fiscal year ends on the last day of September, America's national debt will nearly match the size of the nation's economy for the first time since the end of World War II, according to projections from the Congressional Budget Office (CBO).

But while the coronavirus might have made the federal budget situation worse, it really only accelerated trends that were already well established. As Reason's Matt Welch noted last week, spending under President Donald Trump surged by $937 billion in less than four years—and that was before Congress authorized trillions in emergency coronavirus spending. The Trump administration's tax cuts, while well-intentioned, also added to the budget deficit because they were not offset by spending cuts. It's true that Trump inherited a budgetary mess, but he (and the Republicans who controlled Congress during most of his tenure) have undoubtedly made the mess worse.

And, again, that was all before the current crisis hit. Here's a graphic from the Committee for a Responsible Federal Budget (CRFB), a nonprofit that advocates for lowering the deficit, that succinctly demonstrates how the coronavirus pandemic has accelerated America's climb towards a 100 percent debt-to-GDP ratio: 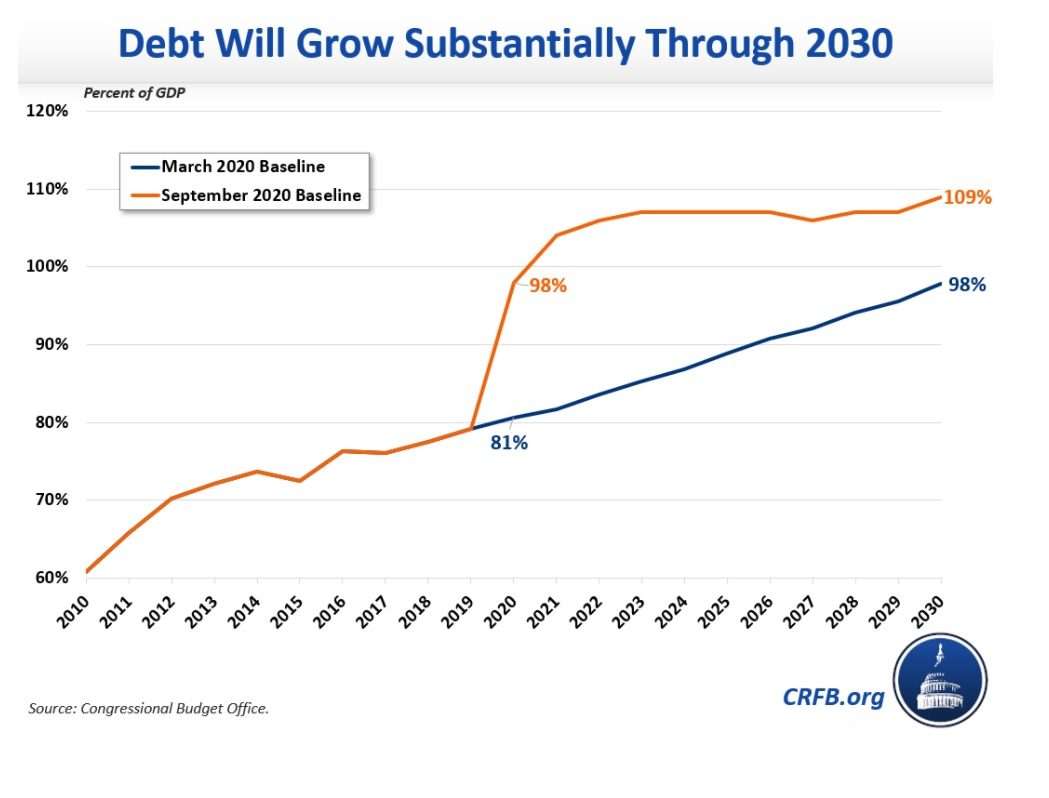 "The last time we borrowed this much, just after World War II, the country ran over a decade of roughly balanced budgets to get us back on the right path," MacGuineas said in a statement. "Today, we face rising health and retirement costs and have no plan to even avoid the looming insolvency of Social Security and Medicare."

Indeed, the main driver of America's debt problem is the federal entitlement programs—Social Security, Medicare, and Medicaid—which account for about half of all federal spending. In a separate report also released Wednesday, the CBO projected that the federal trust for those entitlement programs will fall by $43 billion in the current fiscal year. The economic downturn caused by the coronavirus pandemic has caused payroll taxes, which fund entitlement programs, to decline. Unless Congress takes action, those trust funds will be exhausted within 10 years, the CBO warns.

Meanwhile, Congress continues to debate the short-term question of whether to spend even more money in response to the coronavirus crisis. The House has passed a $3.5 trillion stimulus bill, but Senate Republicans have blocked its passage due, in part, to concerns over whether America can afford to borrow more heavily.

In short, the debt crisis is no longer a hypothetical future event but one that is very much starting to impact the day-to-day and year-to-year budget process. A persistently high level of debt may not be a death sentence for the American economy (though it will almost certainly slow future economic growth), but it has almost certainly reduced America's options for addressing both short-term and long-term crises.

America missed its chance to get the debt and deficit under control. Now, it is thoroughly out of control.