As first lady, Melania Trump's primary role has been a cipher for whatever partisans fear, loathe, or love about her husband, President Donald Trump. With that ever-steely stare, a dearth of public speaking, several questionable clothing choices, and a few glaringly absurd biographical bits (an immigrant and woman who has chosen to make online bullying her cause even as her husband has been the online bully in chief while working to keep immigrants out), Melania seems to inspire fascination, revulsion, and projection in equal measure.

Her Tuesday night speech from the White House lawn—part of the Republican National Convention (RNC)—was no exception.

Yet again, a few celebrity Democrats took the opportunity to disgrace themselves spectacularly.

interesting analysis of the first lady's speech from a White House correspondent. pic.twitter.com/BMaEc8gpOH

The most substantive critique of Melania Trump's talk was that her words and rhetoric—while laudable—are at odds with what her husband and his cronies have done in office and ring hollow in light of some of the first lady's own past positions or advocacy.

Melania Trump's speech chalks up her ability to get American citizenship to "hard work and determination" plus waiting a bunch of years/doing paperwork. Many other people would like to work hard and wait patiently and file some paperwork, too, but are prevented from doing so…

However, most people don't know or care about all that. And from a political persuasion and strategy standpoint, the first lady's convention speech seems to have hit all the right notes.

"I don't want to use this precious time attacking the other side," the first lady said at one point. And she didn't.

Melania Trump: "As an immigrant and a very independent woman, I understand what a privilege it is to live here and to enjoy the freedoms and opportunities we have."

She acknowledged the coronavirus pandemic in a non-dismissive way and expressed sympathy to people who had lost loved ones to COVID-19. (Also, she called it COVID-19, not the China Virus, as the president often does.) She said America's "diverse and storied history is what makes our country strong, and yet we still have so much to learn from one another," promoting a message of tolerance and inclusion.

The bar here is pretty low, but Melania's speech amounted to "more than the 'Donald Trump is a beautiful man whose thinking is both out of the box & strikingly urgent' nonsense the other people have said," commented Mother Jones Editorial Director Ben Dreyfuss.

"A very good and civic minded speech," tweeted Jonah Goldberg of The Dispatch. "She took the high road & talked about our problems. For that she should be congratulated."

The first lady's speech was "far more conciliatory … than other speakers who used their lecterns to bombastically promote the president," wrote Politico's Matthew Choi, noting:

The majority of her address was both an appeal to the country's morality and her own experience as first lady. She spoke aspirationally about her own next four years as first lady if her husband is reelected, independent of the president's agenda.

It was a stark contrast from the doting addresses by other members of the Trump family who spoke at the convention — and a divergence from the supporting roles that speakers and Biden family members played at the Democratic National Convention.

Whatever else is true here, Melania Trump managed to convincingly portray a conventional first lady and to—arguably less convincingly—frame her husband's unconventional presidency as an asset. ("The first lady showed self-awareness in presenting herself as the calm, soothing counterpart to her famously (but, she stressed, not dangerously) volatile husband," suggests Tim Alberta at Politico.)

In talking to "suburban, center-right women" who are undecided about Trump, "one thing that has struck me [about] these interviews is that they are often looking *for* a reason to reelect Trump," tweeted New York Times political reporter Elaina Plott. "Any data point that helps them feel more comfortable doing so -- like seeing the first lady evince something like compassion -- thus becomes very, very meaningful." 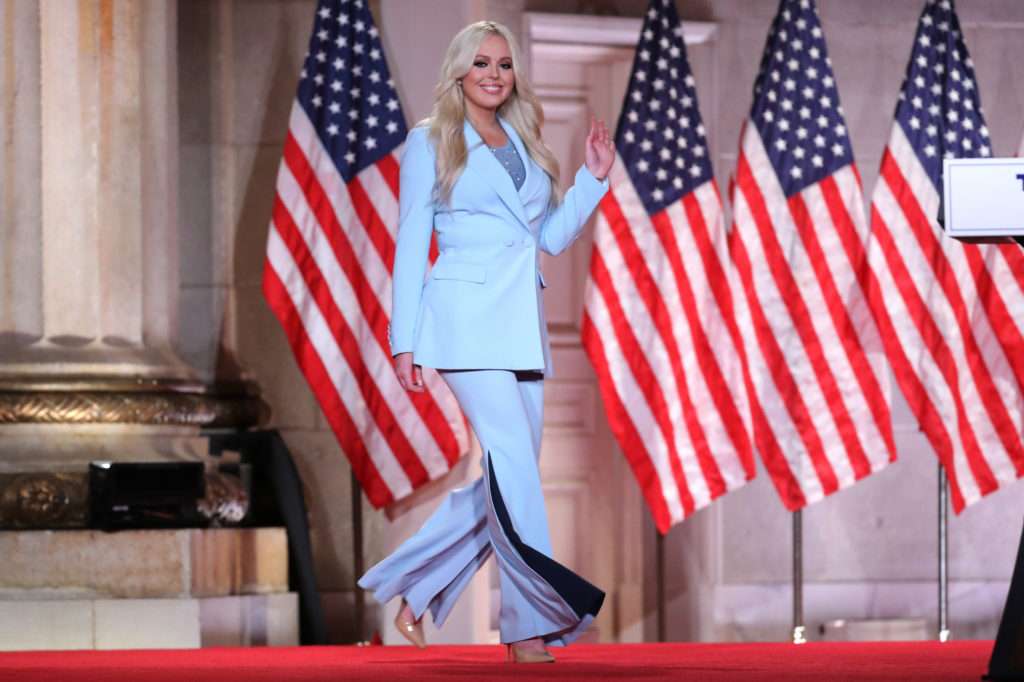 Donald Trump's youngest daughter, Tiffany Trump, also appeared relatively normal and empathetic, or at least able to evince a convincing amount of compassion, during her Tuesday night RNC address. These attributes have, alas, been exceedingly rare so far at the RNC.

Overall, last night's focus was less on how Democrats are going to abolish the suburbs with their socialism and more on core Republican issues like how abortion and social media are bad. Another core element of the RNC so far has been putting up what one might call a facade of evidence.

Sure, the Trump administration has made deporting and barring more immigrants the main part of its mission—but here's Trump with five immigrants who are becoming U.S. citizens. Sure, the Paycheck Protection Program intended to help businesses recover from coronavirus-related lockdowns was a disaster, but here is someone who will praise it. Sure, state and federal wars for protective gear put nurses and doctors at risk, but here is a traveling nurse who is a Trump fan. Trump may be seriously unpopular among black voters, but here are a few black people who like him. Trump may spurn the vast majority of refugees, but here is one whom he didn't. Trump may be constantly pushing for new crimes and harsher penalties, but here is one man he pardoned. And so on…

All the while, RNC speakers have mooned over Trump and described him in gushing, hyperbolic-at-best terms that go way beyond your typical (Republican or Democratic) convention fan club. "If you built a drinking game out of RNC speakers ladling out hyperbolic, coke-shooting-from-your-nose praise on the president, you'd be dead before midnight each day," writes Matt Welch, offering a litany of outrageous claims. A few:

"He ended once and for all the policy of incarceration of black people," claimed George state Rep. Vernon Jones Monday. Big, if true. (It's not.)

"Our president," asserted Cuban immigrant Maximo Alvarez, "is just another family man," which is arguably the most elastic definition of family values since Big Love.

"He has," heralded Afghanistan War vet Sean Parnell, "fiercely defended the besieged First and Second Amendment." The latter of which is debatable and the former of which is the inverse of the truth. […]

"He built the greatest economy the world has ever known," [Kimberly Guilfoyle] said, at a time of double-digit unemployment. "America, it's all on the line," she added. "President Trump believes in you, he emancipates and lifts you up to live your American dream."

Such is the rhetoric of recently transformed autocracies, not mature republics.

The RNC is a case study in why Big Tech is good. "If there was ever a televised event that demonstrated the lameness of the conservative anti-tech position, it was the first day of the RNC," writes Robby Soave. "No major tech platform censored any of the content—on the contrary, they granted easy and unrestricted access." The same went for the second night of the convention. Meanwhile, cable news channels—including Fox News—continually cut away so their pundits could comment on or "fact-check" RNC talks and videos, sometimes cutting away mid-speech or not showing some speakers at all.

"In 1975, the future president Ronald Reagan said, 'I believe the very heart and soul of conservatism is libertarianism,'" notes Reason Managing Editor Stephanie Slade in The New York Times. Yet,

Today, many leaders of the Republican Party have coalesced around a desire to purge libertarians, with our pesky commitments to economic liberty and international trade, from their midst. If Mr. Reagan's agenda was a three-legged stool of religious traditionalism, a strong national defense and free-market economics, they hope the latter leg can be reduced to sawdust and scattered to the winds.

• "Lezmond Mitchell is scheduled to die Wednesday, over the objections of the Navajo Nation to which he belongs and on whose land the murder took place," notes Scott Shackford. More here.

#SCOTUS refuses to block execution (scheduled for tomorrow) of Lezmond Mitchell, the only Native American on federal death row. No noted dissents, but Sotomayor urges court to weigh in on interpretation of Federal Death Penalty Act soon.

• An update on the Portland protests and the federal goon squad sent to suppress them:

On a DHS leadership call early on in the Portland response, acting @CBP head Mark Morgan said: "We ought to detain and interrogate the shit out of every single one of them," two administration officials familiar with the call told me and @woodruffbets. https://t.co/IoJKPrpTfH

• "Three years ago, a federal judge ruled that [sex offender registry] consequences amounted to cruel and unusual punishment of three men who challenged their treatment under Colorado's Sex Offender Registration Act," writes Jacob Sullum. But "last week a federal appeals court overturned that decision, saying the burdens imposed by registration do not even qualify as punishment, making the Eighth Amendment irrelevant."

• "A senior Democrat on the House foreign affairs committee has launched an investigation into whether Mike Pompeo is breaking federal law by addressing the Republican national convention while on an official visit to Jerusalem," reports The Guardian.

Today is arguably the best day of Kanye West's presidential campaign so far. His petition to get on the ballot has been accepted in Minnesota and he is officially on the ballot in November in Tennessee and Idaho as well