It was a blink-and-you'll-miss-it moment within President Donald Trump's State of the Union address Tuesday night, but the president appeared to acknowledge that his trade policies haven't been a winner for American manufacturing.

How else to explain this bit of modesty from the otherwise braggadocious Trump? Here's what the president said [emphasis mine]:

That sounds pretty impressive. Unless you know that Trump said this during last year's State of the Union: "We have created 5.3 million new jobs and, importantly, added 600,000 new manufacturing jobs, something which almost everyone said was impossible to do."

There's enough ambiguity—probably on purpose—in what Trump said tonight to make it tough to say he's lowering his boasts. But the fact of that matter is that manufacturing job growth has been in recession, according to the Federal Reserve, for most of the past year. That's largely thanks to the very trade policies that the Trump administration continues to say will help that sector of the economy.

According to the Bureau of Labor Statistics, America had 12.3 million manufacturing jobs in January 2017 when Trump took office. That was up from a historical low of 11.4 million such jobs in March 2010 at the trough of Great Recession. By last February, there were 12.8 manufacturing jobs—an increase of just over 500,000 during his tenure, but we'll let the president slide for a slight overestimation there.

Now? There are still 12.8 million manufacturing jobs in America. 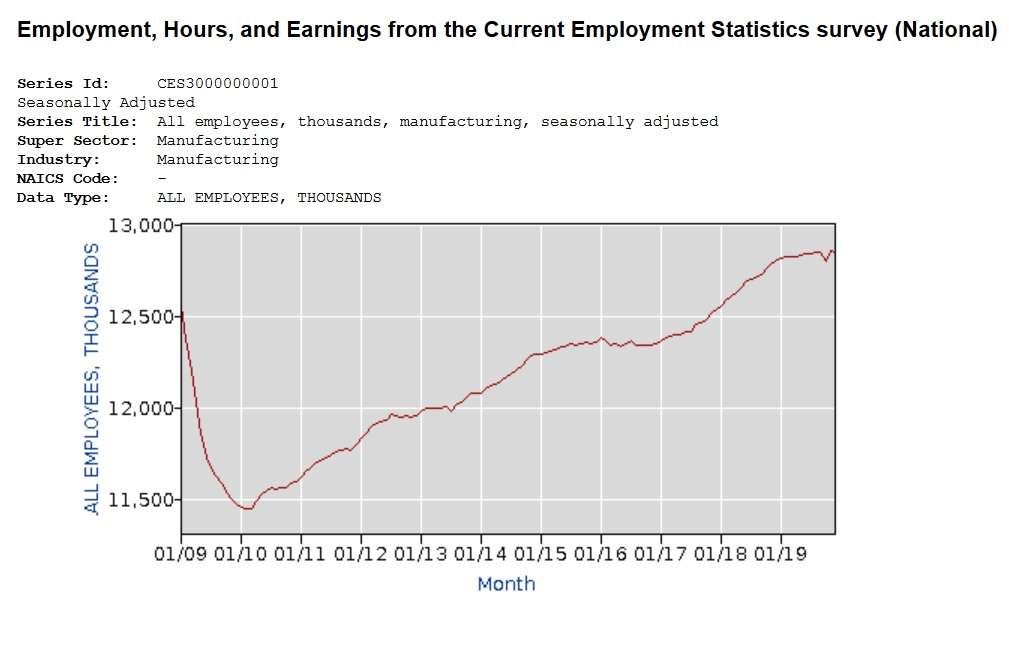 Rather than accelerating manufacturing job growth, it seems like Trump has presided over a notable slowdown.

Contra Trump, these are not signals that businesses are making the necessary expenditures to build more factories and increase jobs. And Trump's tariffs have extracted $46 billion out of American companies since March 2018, which probably helps explain why it has been difficult to expand.

It's true that the signing of a new North American trade pact and a "Phase One" deal with China—which is mostly just an agreement to avoid further escalations in the trade war—are likely to restore some confidence, and may spur investment this year.

But the fact remains that Trump's bellicose trade policies have been a self-inflicted wound on an otherwise strong economy. Maybe that's because Trump is ignorant about the basics of global trade. Maybe it's because his advisors are giving him bad advice.

Either way, the fact that the White House couldn't find a better way to spin a manufacturing recession at the State of the Union says a lot about how economic reality is dealing a blow to the Trump administration's protectionist fantasies.