Less than 24 hours after President Donald Trump announced an escalation of the trade war with China, he got some predictable news: America's trade deficit has hit a new high.

The gap between how much America exports to China and how much it imports from the Asian nation grew to $30.2 billion in July, up from $30.1 billion the previous month, according to Commerce Department figures. The widening gap was due to a decrease in the value of American exports, Bloomberg notes.

In normal circumstances, this wouldn't be a big deal. Economists generally agree that trade deficits don't matter, for the same reason that you wouldn't worry about running a "deficit" with a grocery store. But Trump has used America's trade deficit as a key justification for his trade policies, and he has repeatedly promised that tariffs on China would reduce that deficit.

Instead, the opposite has happened.

Trump's tariffs are having an impact. During the first six months of 2018, U.S. exports to China fell by 18 percent relative to the same period last year. Imports from China slipped by 12 percent. Both sides are doing less trading, but the trade deficit persists. 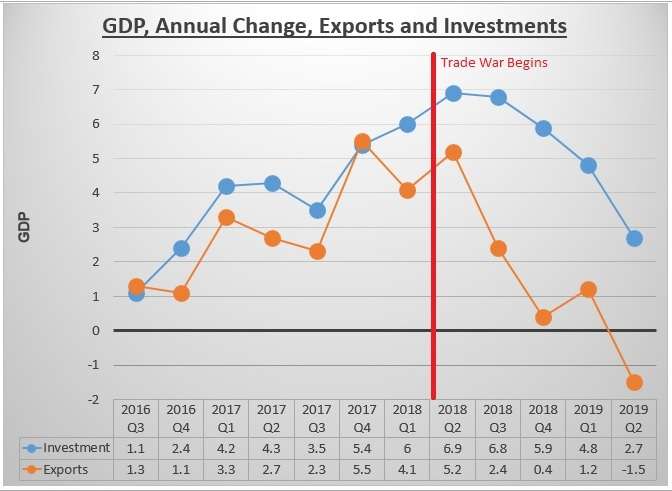 According to the Commerce Department, investment in American businesses has fallen off sharply since the start of Trump's trade war in mid-2018. Nonresidential domestic investment was buoyed by the tax cuts Trump signed in December 2017, but during the second quarter of 2019 investment dipped into negative territory. That's a sign that businesses are holding back on hiring or expanding in the face of the uncertainty created by the president's trade policies.

Equally significant is the recent sharp drop in American exports. This is an expected but perhaps underappreciated consequence of Trump's policies. "Exporters can be successful only if they are viewed as reliable suppliers," writes C. Fred Bergsten, a senior fellow at the Peterson Institute for International Economics. "But Trump's trade policies have rendered US firms among the most unreliable in the world."

As a perfect encapsulation of where the economy is right now, after a gangbuster 2018, job growth year-over-year in goods is just about where it is for services. Goods has seen a dramatic slowdown, while services has held up better. pic.twitter.com/WvTcdGLjMB

But as the chart above indicates, goods-producing jobs have been declining steadily since last summer. The drop-off begins almost exactly when the trade war began.

Almost all the US job gains are now coming from the service sector, not blue collar. Manufacturing jobs are basically flat this year. 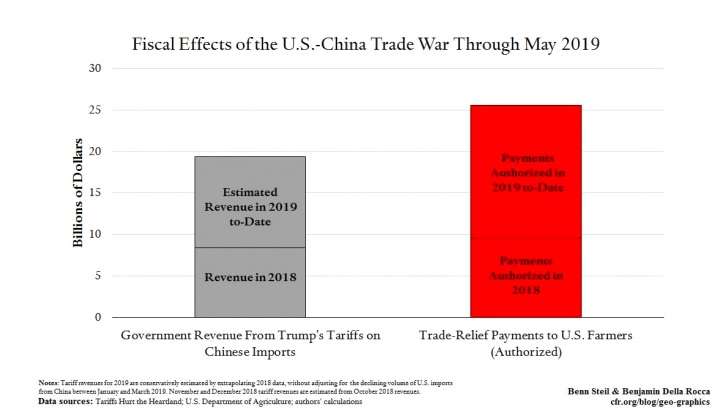 Another of Trump's favorite defenses for the trade war is the claim that tariffs are generating billions of dollars for the U.S. Treasury. He's right about that much—though it's Americans who are paying, not China.

But the tariffs have also failed as a revenue-generating strategy. As of May, they were on pace to generate about $20 billion in revenue by the end of 2019. By comparison, Trump's bailouts to farmers hurt by China's retaliatory tariffs totaled over $25 billion.

Those bailouts, meanwhile, have been a complete mess. A report released this week by the Environmental Working Group, a agricultural policy watchdog, found that 54 percent of those payments went to just 10 percent of all farmers.

With more Chinese tariffs set to take effect in September, it's possible that Trump's tariffs and bailouts might balance each other out by the end of the year. If so, an 18-month experiment in economic nationalism will have been, at best, a wash for the Treasury while serving as a massive transfer in wealth from America's manufacturing and agricultural sectors to a small sliver of farmers. Great success!