Edward Snowden has a message to the tech developers who have digitized so much of our lives: If the United States and other world governments are not willing to recognize our right to privacy, then the private sector is going to have to do the work. 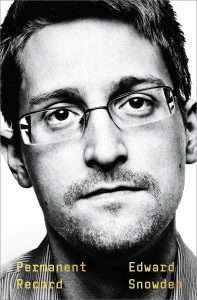 The whistleblower's new autobiography, Permanent Record, details how he discovered and exposed Washington's mass surveillance of American citizens. Happily, he does this in approachable prose that doesn't require readers to have served time in an IT department to understand it.

The book recounts Snowden's fears that the United States is following in the footsteps of China's surveillance of its citizenry, his discovery that these worries were true when he stumbled across a classified report while working for the National Security Agency (NSA), and his decision to sneak documentation of the NSA's techniques to journalists Glenn Greenwald and Laura Poitras. I won't belabor that story—it's pretty much a matter of public record now, and it's not the draw of the book. The selling point of Permanent Record is its insight into why Snowden did what he did and how he feels about the state of the world today.

Snowden's decision to become a whistleblower sprang from his strong belief that the Constitution is supposed to restrain the government's power over the public. He was angry when he discovered the documents describing just how extensive the NSA's post-9/11 domestic surveillance program STELLARWIND was. That operation had been exposed in 2004 by whistleblower Thomas Tamm, yet it quietly continued and expanded.

In Permanent Record, Snowden argues that the mass collection of Americans' data without individualized warrants violates our Fourth Amendment rights. The intelligence system that had been sold as a way to fight terrorism was in fact being turned against us all. "After a decade of mass surveillance," he writes, "the technology had proved itself to be a potent weapon less against terror and more against liberty itself. By continuing these programs, by continuing these lies, American was protecting little, winning nothing, and losing much—until there would be few distinctions left between those post-9/11 polarities of 'Us' and 'Them.'"

We'd been assured that our private data was being carefully, thoughtfully handled—that serious oversight and meaningful protections were in place. But that's not what Snowden found. Pretty much anybody could become a target:

The grounds for suspicion were often poorly documented, if they were documented at all, and the connections could be incredibly tenuous—"believed to be potentially associated with" and then the name of some international organization that could be anything from a telecommunications standards body to UNICEF to something you might actually agree is menacing.

Snowden describes the sometimes overly friendly relationship between tech companies and the government, which at times had the former giving the latter access to our info without our knowledge. But he also sees the positive in the pushes by companies like Apple and Google to bring consumers better encryption. "Encryption," he writes, "is the single best hope for fighting surveillance of any kind. If all our data, including our communications, were enciphered in this fashion, from end to end…then no government—no entity conceivable under our current knowledge of physics, for that matter—would be able to understand them."

This makes it all the more important to resist officials' efforts to hobble encryption with "back doors" that allow police to access your private data without your permission. Politicians, police chiefs, and leaders of the FBI insist that criminals are using encryption to "go dark," making it harder for police to solve crimes and for the feds to track down terror threats. But this is the same way they sold these surveillance powers, and then it turned out they were abusing the system. The ability to secretly bypass encryption would simply allow new avenues of warrantless surveillance of American citizens.

Given the national security state's lack of respect for the Fourth Amendment—and given how weak-willed politicians have been about standing up to those agencies—Snowden thinks it's up to independent, private, privacy-minded tech developers to take the lead in protecting our privacy:

In a perfect world, which is to say a world that doesn't exist, just laws would make these tools obsolete. But in the only world we have, they have never been more necessary. A change in the law is infinitely more difficult to achieve than a change in a technological standard, and as long a legal innovation lags behind technological innovation institutions will seek to abuse that disparity in the furtherance of their interests. It falls to independent, open-source hardware and software developers to close that gap by providing the vital civil liberties protections that the law may be unable, or unwilling, to guarantee.

Meanwhile, Australia is now trying to mandate encryption back doors, with repercussions that go far beyond Australia. And the U.S. government is trying to prevent Snowden from earning money off his own book. Those vital civil liberties protections could use all the help they can get.